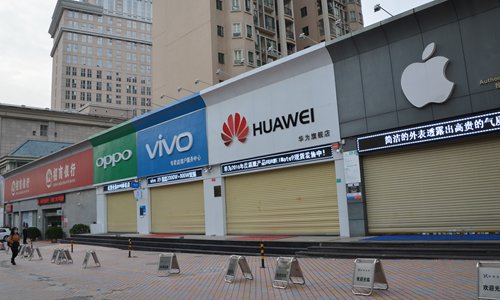 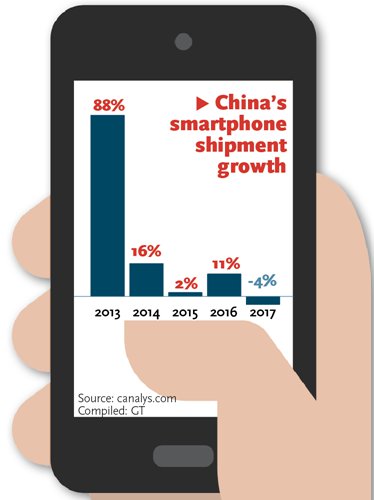 Chinese smartphone makers will continue to face a market downturn in 2018, but an inflection point will occur in the second half of 2019 when gadgets with faster fifth-generation (5G) capability come out, industry analysts forecast on Monday.  A report from market consultancy Canalys suggested that the growth story of the world's largest smartphone market has ended. Sales posted their first annual decline, falling 4 percent year-on-year in 2017 to 459 million units, according to the report.The drop was partly due to the worst-ever year-on-year performance in the fourth quarter, when shipments plummeted more than 14 percent, the report noted. "The decline was due to overall sluggish demand," Mo Jia, an analyst at Canalys, told the Global Times on Monday. Since the second quarter of 2017, customers have cooled on buying the latest smartphone models, he said. The shrinking market will have a detrimental impact on major Chinese vendors such as OPPO and Vivo, which have been heavily dependent on the home market, the Canalys report said. It will affect their cash flow and profitability, limit their global expansion and even bring into question their survival. Vendors are likely to see the market pick up by the end of 2019, Mo forecast. Customers "will be encouraged to buy new models following major technology breakthroughs. For example, 5G promises faster gadgets," the analyst said.Some Chinese vendors are already on track to have commercially ready 5G smartphones in the near future. Huawei Technologies Co will unveil chipset supporting 5G networks and 5G smartphones in 2019, the company said in a note sent to the Global Times during the 4th World Internet Conference, which ran from December 3 to 5 in Wuzhen, East China's Zhejiang Province. ZTE said it will launch 5G mobile devices in late 2018 or in 2019. "5G tablets, customer premises equipment, and smartphones are all under development and will be launched as leading carriers around the world provide 5G services to consumers," it said in a statement sent to the Global Times on Monday.Other Chinese vendors - Lenovo, OPPO, Vivo, Xiaomi, ZTE and Wingtech - have teamed up with US chipmaker Qualcomm recently, with the aim of introducing 5G New Radio (NR) standard-compliant commercial devices expected to be available as early as 2019, the US company said on Wednesday. 5G NR is the foundation of this next-generation cellular network, according to Qualcomm. "Some new features such as dual cameras and full-screen displays won't provide a  fundamental impetus for customers to purchase new smartphone models," Xiang Ligang, chief executive of domestic telecom industry portal cctime.com, told the Global Times on Monday. Still, Chinese vendors will see increasing profits despite sluggish shipment in 2018, Xiang noted. "Prices will keep rising. The average price of a smartphone went to 2,200 yuan ($348) in 2017 from 1,500 yuan years ago," he said. But while major smartphone makers will become increasingly profitable, small and medium-sized vendors will suffer more from the current downturn. "We expect the shipment volume will be down about 10 to 15 percent in 2018, and firms such as Gionee and Meizu will face bigger challenges," Xiang noted. For Chinese smartphone makers that have been expanding actively in oversea markets, their globalization plans may also be hindered by tepid domestic growth, said Mo at Canalys. The expansions of Oppo and Vivo into the Indian market have been slowing in recent months, as they cut their profit margins for Indian mobile phone retailers by over 40 percent over profitable concerns, according to media reports. "Shrinking business at home will affect their growth in foreign markets in 2018," Mo said.