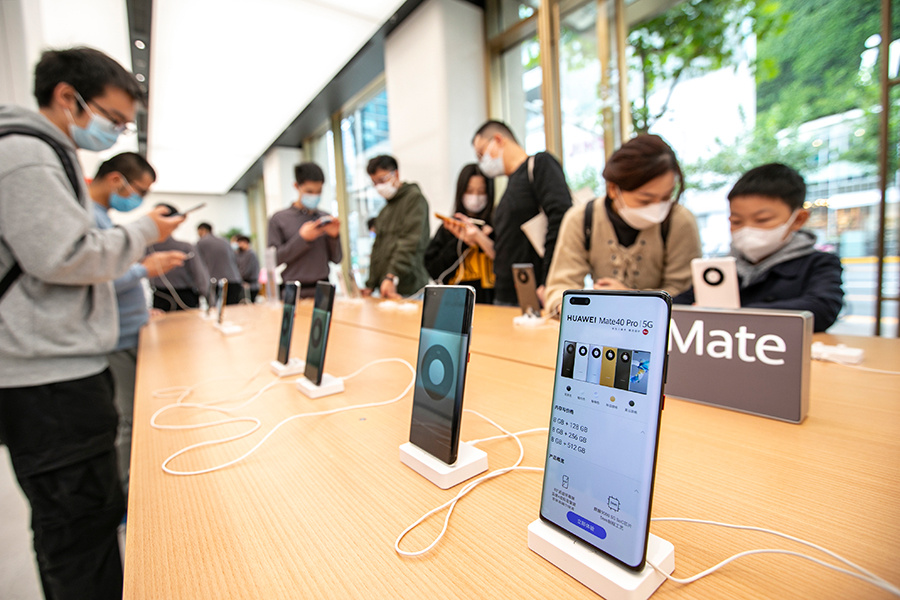 Chinese smartphone vendors are ramping up their push to convince consumers to embrace 5G devices during the May Day holiday, as competition intensifies to a new high after Huawei Technologies Co's smartphone business was crippled by US government restrictions.

The revived battle also came after the Chinese mainland smartphone market recorded its first growth in four years in the first quarter of 2021, with shipments increasing 27 percent year-on-year to 92.4 million units, according to a new report from market research company Canalys.

Eager to attract consumers to upgrade their smartphones to 5G units, companies such as Vivo, Oppo and Xiaomi are offering discounts and trade-in initiatives in online and offline retail stores across the nation during the five-day May Day holiday, which ends on Wednesday.

In sharp contrast, traffic at Huawei's retail stores has decreased due to the shortage of smartphones for sale. "Now we have only two to three models in stock, and some stores even have only one model in stock," a salesman at a Huawei authorized store in Beijing said.

Such a shortage became increasingly evident after the US government restricted companies that supplied chip-related technologies and materials to Huawei in September.

Yu Chengdong, CEO of Huawei's consumer business group, which includes smartphones, tablets and other consumer electronics, said earlier that in less than two years, the United States government imposed four rounds of restrictions on Huawei, pushing the company's consumer business into an extreme predicament and making it unable to deliver goods.

Huawei's presence in the Chinese high-end smartphone and tablet market was lost to Apple, and business in the mid-range and low-end segment went to Oppo, Vivo and Xiaomi. Meanwhile, Huawei's overseas smartphone market share went to Apple, Samsung and its Chinese counterparts, Yu added.

Such a shift was apparent in the latest smartphone report published by Canalys. From January to March, Huawei lost its crown in the Chinese mainland smartphone market to Vivo, which recorded 79 percent year-on-year growth, shipping 21.6 million units, Canalys said.

Oppo chased Vivo as a close runner-up, with 20.6 million shipments. Huawei, which divested its smartphone brand Honor in November, slipped to third place with 14.9 million units shipped in the first quarter of 2021. (Honor took sixth place with nearly 5 million units). Xiaomi was fourth with 13.5 million units and Apple fifth, with 12.0 million units.

The Chinese mainland smartphone market "has returned to prosperity in the first quarter of 2021", said Amber Liu, an analyst at Canalys. "Leading vendors are racing to the top of the market, and there was an unusually high number of smartphone launches this quarter compared with Q1 2020 or even Q4 2020."

The US government's restrictions on Huawei and the company's decision to sell Honor have been hallmarks of this new market growth, as consumers and channels become more open to alternative brands, added Liu.

"The real battlefield is in the highend ($500 and above) segment, where Huawei still held a solid position among Android vendors this quarter, with products such as Mate 40 Pro, and Nova 8 Pro. But we cannot overlook how fast Oppo, Vivo and Xiaomi are catching up in this lucrative segment with their competitive flagship portfolios," Peng added.