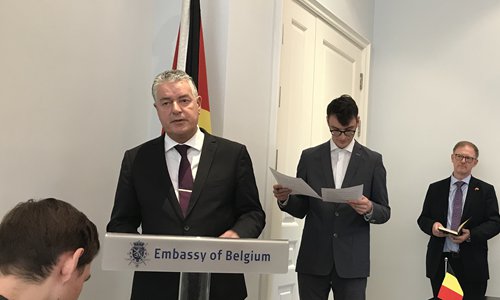 Belgium is sending its largest-ever business delegation to China to shore up economic and diplomatic ties and identify areas for further economic cooperation - especially in e-commerce.

Led by Princess Astrid of Belgium, a 632-person delegation will pay a six-day visit to Beijing and Shanghai starting from Sunday, the Belgian Embassy in China announced at a press conference in Beijing on Tuesday.

Impressed by the huge success of the just concluded Chinese Singles' Day shopping spree, which represented the advanced development of China's e-commerce industry, Belgian officials said at the conference that Princess Astrid of Belgium will hold a meeting with top executives of Chinese e-commerce giant Alibaba during her visit. The delegation will also visit another Chinese e-commerce platform, JD.com.

"[Belgian] companies who are on e-commerce platforms, SMEs sometimes, are very much impressed by the absorption capacity of the Chinese market, and they have started developing a marketing strategy toward Chinese consumers," Marc Vinck, the Belgian ambassador, told the Global Times after the conference on Tuesday.

In order to do this, however, Belgian companies must come to China and better respond to market demand, Vinck said, "so e-commerce also brings new SMEs to China."

China's growing middle class will offer new chances for Belgian products beyond chocolate, beer and other foods, Vinck said, noting that the diamond sector is also doing well in China.

There are various Belgian cookies and chocolates selling well on Chinese e-commerce platforms, and some brands also participated in the promotion activities for China's Singles' Day shopping festival.

Alibaba signed a memorandum of understanding with Belgian authorities at the end of last year, which was the first step in the company's Electronic World Trade Platform project launch in Europe, the Xinhua News Agency reported in April.

As part of the project, Alibaba's Cainiao Smart Logistics NetWork signed a digital hub program with Belgian Liege Airport, which will improve the logistics efficiency for goods transported between China and Europe, said Xinhua.

This economic mission is the largest ever in Belgian history, with an impressive delegation of 632 participants, of whom 465 are business representatives, according to a statement sent to the Global Times from the Embassy of Belgium.

With this large delegation, it is clear that the Belgian business is highly interested in the huge economy that China represents, Vinck told the Global Times.

The mission will focus on showcasing Belgian know-how in a large variety of sectors, including clean technology, healthcare, and life sciences, food products, lifestyle, and sports, said the statement.

More than 70 contracts are expected to be signed during the visit, Vinck told the conference.