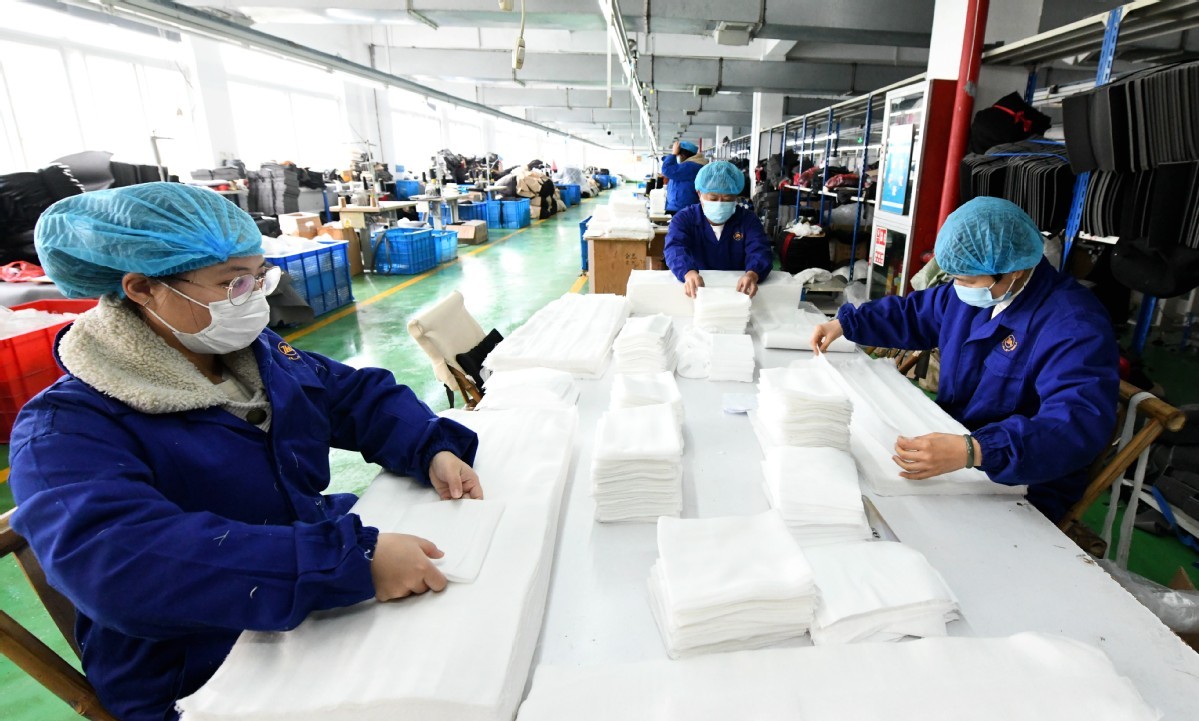 Employees work on the production line of a surgical mask company in Taizhou, Zhejiang province, on Feb 14. (Photo: Xinhua)

As the country continues to battle the novel coronavirus, small and medium-sized enterprises in Zhejiang province have been busy normalizing their operations to pave the way for an anticipated pickup once the epidemic ends.

To prepare for the upcoming busy spring plowing season, Quzhou Bangnongfeng Agricultural Products－a dealer of fertilizers, pesticides, agriculture equipment and chemical raw materials－resumed operations on Feb 13. All the company's 16 trucks and 23 employees are once again available for duty. In less than two weeks, the company has delivered and stored up a total of 900 metric tons of fertilizers and 950 tons of pesticides for the local market.

The timely return to full capacity can be largely attributed to the company's cooperation with over 100 domestic firms that Bangnongfeng has strengthened ties with over the past 11 years. However, some raw materials are still in short supply, said the company's supervisor Feng Quangang.

"Hubei province is a key provider of phosphorus, which is widely used in fertilizers. It is yet not clear when the suppliers will resume operations," Feng said.

Although economic principles say that prices go up when supplies are inadequate, Feng has done just the opposite. Bangnongfeng has lowered prices by 15 percent on more than 40 percent of their products, which amounts to 2.4 million yuan ($346,000).

"Profit is not our top priority at the moment. At a time of difficulty, we are just fulfilling our duty, which is to make sure that farmers have enough supplies for the busy season," Feng said.

According to the Department of Commerce of Zhejiang province, the province's total export volume reached 2.31 trillion yuan in 2019, up 9 percent year-on-year, which was the highest annual growth rate nationwide. The number of export-oriented companies in the province also grew 7.3 percent year-on-year to 82,960 by the end of last year. To sustain the development of these exporters, the local government introduced in February a number of favorable policies covering taxes, financing and market exploration.

"The Zhejiang government has been extremely supportive, as always. That is why local companies can take quick action," said Pan Jian, director of the president's office at Zoy Home Furnishing Co Ltd.

On Feb 16, Zoy sent a chartered bus to pick up its employees across Zhejiang province. By Feb 29, the company was operating at 70 percent capacity and 2,400 of its employees－equal to 80 percent of its total head count－had returned to work.

Listed on the A-share market's main board in 2018, Zoy sells its products to more than 100 countries and regions around the world, including the United States, Europe and Asia.

The company has not lowered its target this year despite the epidemic. The annual growth target remains at 50 percent in order to aim for 10-billion-yuan sales revenue in 2025, Pan said.

"Some companies may have to take the rest of the year to recover their losses. But we are confident we can recover by the end of March," he added.

The capital market seems to have as much confidence. When the benchmark Shanghai Composite Index shed 7.72 percent on Feb 3－the first trading day after the unexpectedly extended Spring Festival－Zoy also saw its price drop by the daily limit of 10 percent to close at 21.32 yuan. But on March 10, its price closed at 24 yuan. In that sense, the loss has been recouped in a month.

The confidence of these export-oriented enterprises in Zhejiang is partly a result of their realistic attitudes. Cai Yongzhen, general manager of Huzhou Damon Suzuki Industrial Equipment, said they had to turn down several overseas orders in the past month because they couldn't keep up with clients' production schedules.

"The basic rule is not to incur losses for our clients. Of course we will bear some loss in that way, but it is within our control," Cai said.

She admitted that it was quite difficult to operate as usual when they set their machines running again on Feb 11. Parts and materials were in very limited supply. But with the help of the local government, such suppliers restarted operations the following week.

Given Huzhou Damon's recovered capacity, a US client which Damon has worked with for five years placed an order for 300,000 rollers in late February.

But that order is not the biggest achievement for Damon during the epidemic. An enterprise resource planning system, which can monitor 80 machines simultaneously, was launched before Spring Festival and continued test running throughout the holiday (Jan 24-Feb 2). The system largely improves automation and reduces unnecessary contact between people, which is of great help during the epidemic, Cai said.