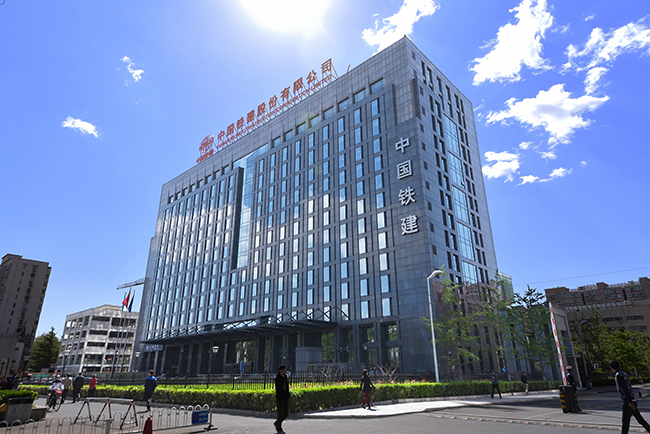 Despite disruptions to industrial chains due to COVID-19 resurgences and external uncertainties, State-owned construction firms, backed by many supportive measures, have been ramping up efforts in infrastructure this year, answering the nation's call for the sector to improve livelihoods and keep the economy running on a stable growth track.

Above a bridge along the Guangzhou-Maoming Railway, a T-shaped beam is being slightly rotated, waiting to be expertly positioned in support of another railway line－the Maoming East-Bohe Port Railway.

"A twist of 43 degrees for a gymnast is elegant, but for a beam, it's a different story," Tan said. "Preparation for the 80-minute rotation work costs six teams from different departments days of preparation, let alone the time spent on carrying out on-site measurements."

The toughest part in the rotation, the manager said, is to ensure safe operations for both the construction work and the operating work involving the neighboring line.

"The shortest distance between the bottom part of the beam and the lightning conductor of the bridge along the Guangzhou-Maoming Railway is only 26 centimeters, but we let them perfectly pass each other and had the beam settled," Tan said, adding that the rotation work is completed during the hours when no trains are expected to pass by.

According to the SOE, the Maoming East-Bohe Port Railway, which is 49.8 kilometers long and is expected to begin operations this year, is a key infrastructure project aiming to give Bohe Port a bigger role in trade, especially within Belt and Road Initiative-involved markets, by having it linked with sea-rail transportation.

The operation of the rail will also improve connectivity between Maoming with inland provinces and regions, including Hunan, Hubei and the Guangxi Zhuang autonomous region.

Many of CR24's peers are also ramping up their efforts in infrastructure nationwide, such as China State Construction Engineering Corp and China Communications Construction Co.

The increasing participation of players in infrastructure construction this year can be seen not only from more online announcements of project breakthroughs of late, but also from official figures. The National Bureau of Statistics said that in mid-June, China's investment in infrastructure was up 6.7 percent year-on-year, with transportation projects, however, contributing the least among the three traditional infrastructure sectors to the growth, which experts attributed to "diminishing interest in public transportation affected by COVID-19 resurgences this year".

"Take a look into the growth, and one may find that the rise was mainly driven by investment in the warehousing sector, and that rail, highways, aviation and pipelines all saw falls in the first five months－as transportation has taken several severe hits from the pandemic," Liu Xiaoguang, associate professor at the university's National Academy of Development and Strategy, was quoted by China Economic Times as saying.

"The driving force of infrastructure in the economy can be and should be stronger, considering its key role when consumption and exports are faced with greater challenges," Liu said.

China's public capital stock per capita, comprising economic and social infrastructure, is still much lower than that in developed economies. There is still great potential to tap into this area, said Fan Ruoying, a researcher at Bank of China.

"As the nation seeks high-quality development in various sectors, and with infrastructure shouldering many key tasks this year, including expanding domestic demand, helping job seekers, and giving impetus to the economy, it's even more urgent and necessary to enhance the infrastructure, both in traditional and 'new infrastructure' sectors, to support and gather speed for the transformation process," Fan said.

Improved infrastructure will also push forward the nation's urbanization progress and smoothen domestic circulation, paving the way for the building of a unified market, she added.