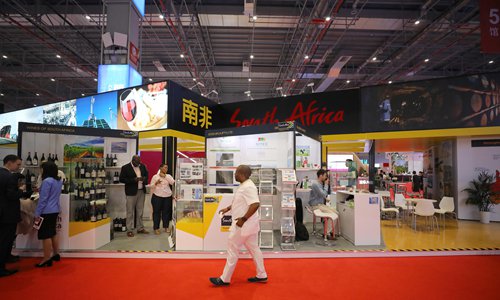 South Africa has made inroads toward the investment environment, and the country has been working to ensure policy certainty and consistency, South African Minister of Trade and Industry Rob Davies said at a forum held in the main venue of the China International Import Expo (CIIE) on Tuesday.The minister said his country's "strategic geographical position, at the tip of Africa, makes it a lucrative investment destination, both for opportunities that lie within its borders and as a gateway to Africa."He said there are 58 Chinese companies that have made capital investments in South Africa, covering sectors including vehicles, electronics, metals, building and construction, and financial services. South African companies see the CIIE as a good opportunity to let more Chinese consumers know about them. "We welcome open and free trade and we are glad that we can bring products to the market for Chinese local consumers. For us, it means new opportunities," Fleetwood Grobler, executive vice president of SASOL, a chemicals and energy company based in South Africa, told the Global Times at the forum on Tuesday. He added that as a global chemical company, SASOL has to focus on Asian markets, particularly in China. He mentioned that's also the reason why the company invested in a facility in Nanjing, East China's Jiangsu Province. Since 2017, total investment in this project has reached 600 million yuan ($86.67 million).He said that SASOL set up its first sales office in China in 1992, and it sees the market growing in terms of demand and opportunities."We see that ... the middle class is increasing, their buying power is increasing, their demand for more advanced, special and high-end goods is increasing. This is good, because it's a great market and opportunity."