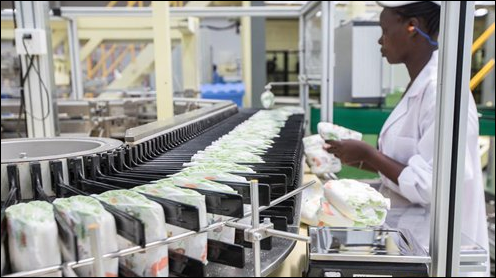 Given the sound political foundation for the bilateral relationship, Chinese businesses are strongly welcome to invest in South Africa, David Mabuza, deputy president of the Republic of South Africa, said in Shanghai on Saturday.

"The South Africa-China relationship is based on mutual interests, trusts, and respect between the two countries and people ... and the two leaders, our President Cyril Ramaphosa and Chinese President Xi Jinping have established a sound footing," Mabuza told reporters on the sidelines of the South Africa-China business roundtable on Saturday. "We are confident that trade and investment between the two countries will grow day by day," he added.

Against the background of a comprehensive strategic partnership between the two countries, China has been South Africa's largest trade partner for 10 consecutive years, while South Africa has been China's largest trading partner in the African continent for nine consecutive years. In 2018, the bilateral trade reached $43.5 billion, up 11.18 percent year-on-year. In the first three quarters of this year, bilateral trade already exceeded $32 billion, according to data from the Ministry of Commerce.

In his speech delivered at the business meeting on Saturday, the deputy president said Chinese business leaders should seize the investment and trade opportunities that are offered by the existing relations between the two countries, adding "We hope Chinese companies can prioritize South Africa as their investment destination."

Echoing similar views, Fikile Majola, deputy minister of Trade and Industry of South Africa, noted that for Wath's hopes to be a reality, they need to seek Chinese investment in the first place.

In his speech, Mabuza also mentioned about the 2nd China International Import Expo (CIIE), which is scheduled in Shanghai from November 5 to 10.

"Through this participation, South Africa hopes to develop export markets for products and services, and to attract new foreign direct investment into South Africa," the deputy president said. "This is an open international cooperation platform for the two countries to showcase their products as well as discuss major issues like foreign trade and world economy," he added.

A total of 49 South African companies will participate in the 2nd CIIE, up sharply compared with last year's 18.

At the invitation of the Chinese Vice-President Wang Qishan, Mabuza is currently paying a visit to China from October 30 to November 3. The visit will focus on strengthening economic, trade and cultural exchanges, and promote Chinese investment in South Africa.