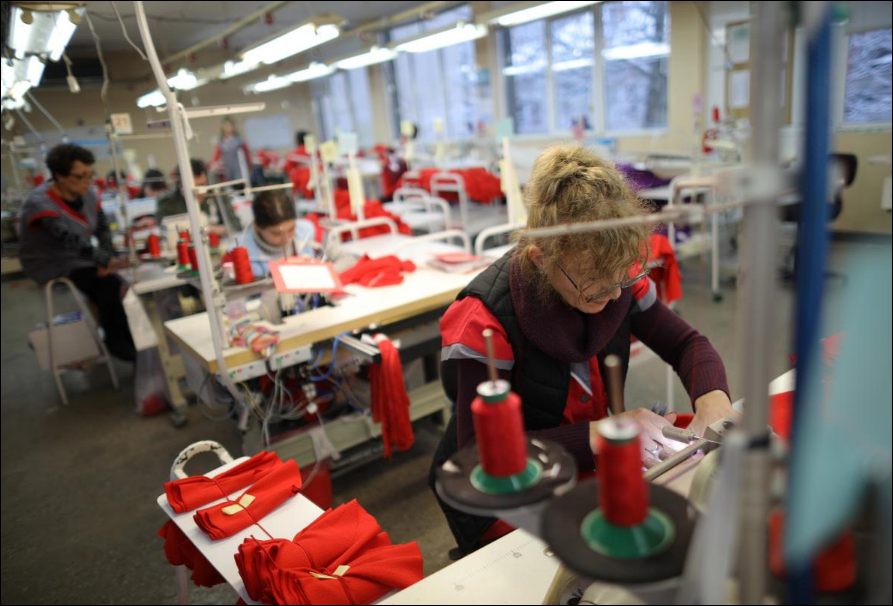 Miglena Hristova’s factory near the Danube is among a growing number in southeastern Europe positioning themselves to help top brands adjust to faster fashion cycles.

Bulgaria, Romania and other countries in the Balkan region have established a foothold in the luxury market and fashion houses from Paris and Milan are quietly building a bigger presence as they feed demand for a quicker turnover of styles.

More affordable labels have long produced bags, scarves, clothes and shoes in southeastern Europe, but margins are becoming slimmer as Balkan companies jostle for that business with China, Turkey and, increasingly, Africa.

The luxury sector is expected to grow up to 5 percent this year, outpacing fashion as a whole, encouraging southeastern Europe to focus its efforts on attracting more upmarket clients alongside competitors such as Portugal.

“In the more luxury segment you make fewer pieces but they are more profitable, which is why we are now targeting them,” Hristova said at her factory in Rousse, where some 40 workers stitch dresses, women’s tops and trench coats.

She said orders and inquiries from top brands were increasing and she has invested in machines to do the specialized stitches, buttons and ironing they demand alongside hand sewing, which is sometimes done through contractors.

She is also installing a fitness room, new bathrooms and renovating the canteen to hold on to workers tempted by higher paying jobs elsewhere as Bulgaria’s economy grows.

For the brands, the cost advantage of nearby countries with the lowest wages in the European Union is not the only factor in an era where word of lapses in quality or poor working conditions spreads fast.

“Convenience and proximity are only two of the precise criteria used by the Group to pick its suppliers; the essential requirements are quality, reliability and the respect of company conduct codes,” said Italy’s Armani, which confirmed it had some suppliers in eastern Europe.

While top French and Italian luxury houses have experimented with manufacturing outside their home base for years now, it is often for more basic garments such as branded T-shirts.

But the need for small batches of work, done fast, to exacting standards, is growing.

Gone are the days when everything was geared towards a few pre-seasonal catwalk shows giving them months to roll out their collections. Now they depend on social media influencers whose audience is spoilt for choice and hungry for something new.

Almost 80 percent of 200 luxury industry executives it surveyed saw proximity sourcing as a growing trend. It said luxury fashion is expected to grow four to five percent this year, compared with 3.5-4.5 percent rise for fashion as a whole.

“This is benefiting local producers in the southeastern European region,” Berg said.

Contracts for the assembly of parts or all of more intricate or big ticket items are on the increase, but brands are not always open about what, and how much, is produced abroad.

Italian down coat maker Moncler MONC.L, which is pioneering faster production times in the luxury world with monthly launches of limited editions, invested around 5 million euros to set up its own manufacturing plant in Romania in 2016.

It accounts for some 20 percent of its puffer production and will be a research and development centre, CEO Remo Ruffini said.

Hristova declined to give details of what she produced, citing confidentiality agreements. The website of her company, MIK-BG, lists Givenchy and Kenzo, two labels owned by Paris-based luxury conglomerate LVMH’s (LVMH.PA). LVMH did not respond to requests to comment.

It was two years ago, she said, when designer brands, often working through French agents place, began placing small orders on more basic items and conducting spot checks on workmanship.

“There is no way to jumpstart with the luxury brands. You start with the lower end, once you prove yourself and deliver on the quality they demand, then you start to receive a higher class of clothes,” she said, citing production times of four to six weeks.

Prada declined to comment while Maison Margiela said 90 percent of its products were made in Italy with the rest elsewhere, including Romania.

Tincu said his was not the only firm working on the luxury front. “There are other, smaller production outlets in the (northeastern) Botosani county that produce everything from shirts to suits for the world’s majors.”

Clothing exports have been growing strongly in Romania and Bulgaria for years but cost pressures are showing.

In Romania they were 2.6 billion last year, Eurostat data shows, a seven percent dip from a record high the previous year, while Bulgaria exported 1.5 billion euros-worth, a slight dip from its record high a year earlier. Exports from Croatia and Slovenia were much smaller but on the rise.

Bulgarian Association of Apparel and Textile Producers and Exporters chief Radina Bankova said salaries were becoming less competitive, a problem for the textile industry across Europe.

In the first six months of last year, 4,000 people quit the sector, leaving around 88,000, just over half the number a decade ago. “It is called light industry but it is not light at all. People need a lot of skills. And the people with the right set of skills are getting close to retiring age,” Hristova said.

Hence the drive upmarket where margins were better.

“If a dress takes 100 minutes to make, the cost is 16 euros for mid-range and 40 euros for luxury brands, she said, adding the mantle of cheap clothing supplier, once held by Bulgaria, had long since moved to China and would shift again. “The next Bulgaria will be somewhere in Africa, most probably,” she said.

Bankova listed Armani, Versace and Hugo Boss as companies producing in Bulgaria. Versace said some of its Versus and Versace Collection products were manufactured through suppliers in countries including Bulgaria and Romania. Hugo Boss said it was working with six suppliers in Bulgaria.

Portugal also targets the luxury end. Its clothing exports rose some three percent last year to an all time high of 3.2 billion euros, according to Eurostat.

The head of the Textile and Clothing Association, Paulo Vaz, said while Portuguese salaries were higher than in eastern Europe they were half those in France or Italy and cited lead times of two to five weeks.