BUSINESS Southern-dominated tea industry takes off in the north

Southern-dominated tea industry takes off in the north 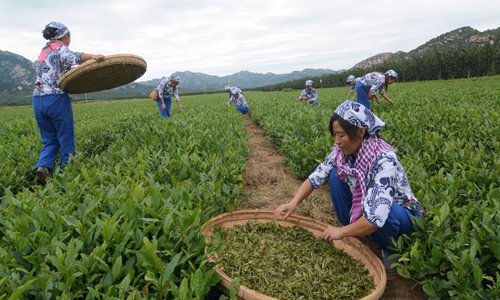 As the spring tea picking season starts, workers at a tea plantation deep in Taihang Mountains in Lincheng county, North China's Hebei Province, are working around the clock picking and drying tea leaves."In the past, people saw planting southern tea in North China as a daydream. But we made it," said Qu Baomin, 42, a tea-planter who successfully brought southern tea to Taihang Mountains and started mass production.Tea has been planted for thousands of years in South China. In the 1950s, China began to explore tea planting in the north of the country, but the latitude and cold weather were always an obstacle.In 2012, Qu and his wife contracted two hectares of land to plant tea in Tonghua village on Sanfeng Mountains, which is nearly 1,500 meters above sea level, with rivers flowing through it.The longjing-43 tea introduced by Qu is very resistant to cold weather. But for southern tea, the most difficult days are still winter in northern China, especially in Taihang Mountains, where temperatures can drop to as low as -20 C."The key factor for the survival of the tea plant is to keep warm in winter, and we chose to grow the plant in a greenhouse," Qu said, adding that it should not be too cold or too hot in the greenhouse. He always opens the window when the sun comes out in case the temperature in the shed gets too high.Since planting tea in 2012, Qu has spent almost all of his time in the tea garden on the mountains. Finally, his hard work paid off.In 2014, the Tea Quality and Supervision Testing Center, Ministry of Agriculture recognized the shape, color, aroma and taste of the Tonghua tea produced by Qu as being of high quality."This proves that the north can produce good-quality tea," said Wu Xun, a researcher from the Tea Research Institute, Chinese Academy of Agricultural Sciences. "The sunshine duration is long and the temperature difference is large in the north. Once we solve the problem of 'surviving' using greenhouses and other facilities, it's possible for the quality of the tea to surpass that of the south."High qualityAlthough the tea from Taihang Mountains is not yet well-known, Qu's tea has already earned a reputation for its good quality in the middle to high-end tea market. About 100 grams of tea can be sold for 1,000 to 3,000 yuan ($145 - 435) depending on the grade."Investment in tea planting is mainly in its early stages. As long as you survive the first five years, the benefits are considerable," Qu said. "The economic age of tea plants is 40 to 70 years. If they are well planted, the financial returns will be several thousand yuan per mu per year."Qu's tea planting business has helped almost 100 farmers shake off poverty. It has also spread to other areas of the Taihang Mountains, and Shijiazhuang and Baoding cities.Gong Qiugen, a 63-year-old farmer from Tonghua village, has been working in Qu's tea garden since he started."The people who work here are all from our village. Each month, I can earn 2,000 yuan ($290) and during the three-month tea picking season, I can earn up to 10,000 yuan ($1,447)," Gong said."My next goal is to lead more people to plant tea trees in Taihang Mountains and lift more people out of poverty, so Taihang Mountains can be evergreen with the fragrance of tea fragrance spreading in the air," Qu said.