BUSINESS Soybean imports from US surge in October

Soybean imports from US surge in October 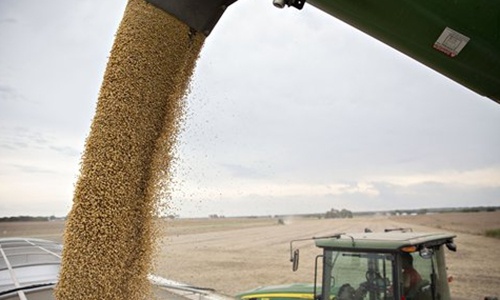 China's soybean imports from the US surged almost 200 percent year-on-year in October as the phase-one trade deal moved forward, experts said. The rise also reflected a lower base last year when the two countries were in the middle of an intense trade fight.

As soybean growers in North America usher in the harvest season, China may continuously increase imports from the US in the near future, spurred by domestic demand and as a goodwill gesture to the incoming Biden administration, they said. A full rebound, however, still relies on the removal of tariffs.

According to customs data, China's soybean imports from the US reached 3.4 million tons in October, up 196.4 percent year-on-year. In September, imports totaled 1.17 million tons.

China's total soybean imports reached 8.68 million tons, up 40.6 percent year-on-year, in October. For the first 10 months of this year, imports increased by 17.7 percent, according to customs data.

"The surge was mainly due to shipments that followed the signing of the first phase China-US trade deal arriving in China, combined with last year's lower base," Jiao Shanwei, editor-in-chief of cngrain.com, a website specializing in grain news, told the Global Times on Thursday.

The rise in imports is a positive sign that the phase one trade deal is still moving forward, experts said.

The China-US phase one trade agreement has been "actively advancing" over the past year, and it will go on as per the agreement text under the incoming Biden administration, Gao Lingyun, an expert at the Chinese Academy of Social Sciences in Beijing, who's closely following the trade talks, told the Global Times on Thursday.

Although some targets set in the agreement still haven't been met due to reasons such as the pandemic, there's no doubt that China's striving to meet the goals, including soybeans, Gao said.

Under the initial trade deal, China will buy an additional $32 billion worth of US agricultural products over two years above a baseline reflecting 2017 figures.

North American soybeans are in the harvest season, which ends in March, so China may purchase more US soybeans, as well as wheat and corn, as a goodwill gesture to the incoming Biden administration, said Jiao.

However, Jiao cautioned that due to tariffs, the price of US soybeans remains less competitive compared with crops from Brazil, thus preventing China's vast private sector from buying an even larger amount.

China, the world's largest soybean buyer, has been diversifying its sources amid trade friction with the US - its top supplier - and Brazil has been a major beneficiary.

If the US wants its soybeans to "regain dominance" in the Chinese market, removal of tariffs would be a positive first step, Jiao said.