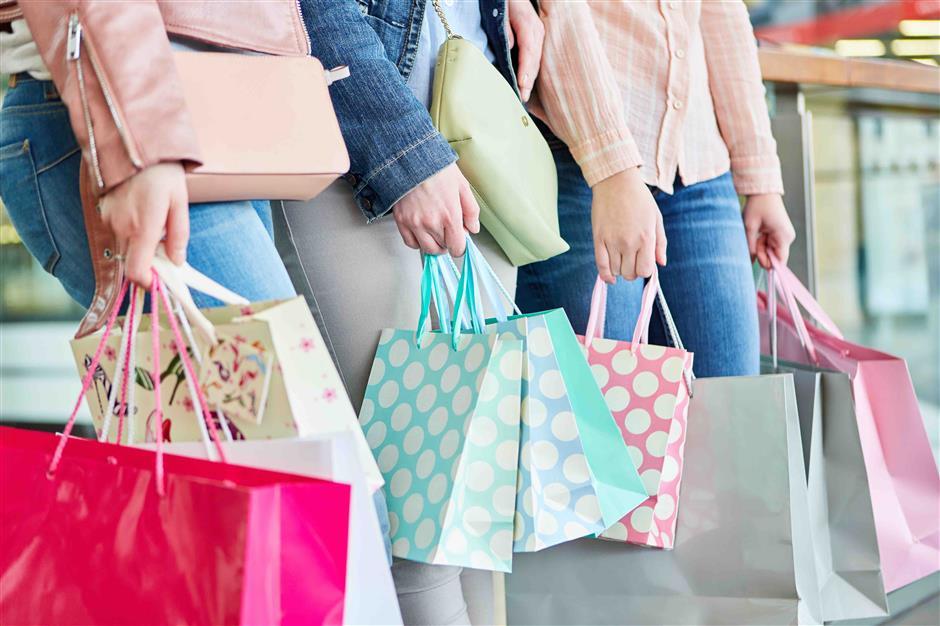 Spending boomed during the holiday with department store sales jumping 12.5 percent across the country.

Booming online spending during the golden week holiday pointed to further signs of an economic rebound and strong consumption momentum.

China UnionPay's network said it handled 2.52 trillion yuan (US$371 billion) of payment over the eight-day break, adding 8.3 percent from the same period a year ago.

Department store sales jumped 12.5 percent across the country with the fastest growth in Jiangsu, Shanxi and Gansu provinces.

In the first three days of the holiday, WeChat said payments related to tourist attractions and the hospitality industry jumped 83 percent and 71 percent compared with the Labor Day holiday period.

Guangdong, Shandong and Jiangsu were the provinces with the highest number of WeChat payment transactions.

The total amount of payments at hotels and restaurants were up 71 percent and 30 percent respectively.

The number of visitors of duty-free shops in the first three days of the eight-day break was more than double that in May.

China's online retail sales in the first half of the year had risen by 7.3 percent year on year to exceed 5.15 trillion yuan (US$758.5 billion), according to the National Bureau of Statistics.

Online sales of physical commodities accounted for 25.2 percent of total retail sales of consumer goods over the period with the digital economy becoming an indispensable part of consumption recovery.

According to Alibaba's travel site Fliggy, the number of users who purchased family travel packages (including at least three return flight tickets) grew 160 percent compared with the last long weekend in June.

Home-stay bookings added 68 percent from a year earlier with family getaways attracting those seeking a break from urban life.

Nationwide, the number of hotel bookings jumped 50 percent from a year ago and about a third of travelers were under 25 years old.

Tourism revenue improved over previous holidays such as the three-day Dragon Boat Festival, according to the Ministry of Culture and Tourism.

The number of online payments at caterers and diners from October 1 to October 4 jumped 78 percent compared with Labor Day.

The number of tickets sold at tourist attractions surpassed 5 million on a single day on October 3.

The most attractive cities for domestic travelers were Beijing, Shanghai, Chengdu, Xi'an and Chongqing.

In the first half of the holiday, online reservations for tourist ticketing and admissions jumped 61 percent from a year earlier and that of catering services surged 166 percent compared to Labor Day.

Local lifestyle services were also the choice of elderly people. For those above 60, Meituan said their most frequent used services were catering, movie ticketing, ticketing at tourist sites, payment at hotels and supermarkets.

Total holiday spending jumped 30 percent from a year ago in Hubei Province.

Travel review website Mafengwo said on Friday that there had been a spike in the average price of minsu (B&Bs) during the holiday, growing 32.97 percent from the same period last year.

The price of hotel accommodation surged 25.67 percent during the holiday over last year.

"The higher demand of tourists on safety and quality following the pandemic has boosted the upgrade of tourism consumption," said Ma Yutao, a tourism analyst with the travel platform.

Some less known destinations gained in popularity among young tourists during the holiday and the Qingxi Countryside Park in Shanghai, Danjing Mountain scenic area in Chengdu and Daguan Wetland Park in Guangzhou were on the list, Mafengwo said.

Hot springs and amusement parks were favored by families and vehicle rental were more favored due to the pandemic, it said.

Online travel operator Tongcheng Yilong said on Friday that its bookings for air, railway and ship tickets had grown by 27 percent as of October 7 during the holiday from the same period last year and domestic hotel bookings soared 43 percent.

The average price of hotels at popular long-distance tourist destinations such as Sanya, Xiamen, Chengdu, Chongqing, Dali and Xi'an surged between 140 and 300 percent during the holiday from early September, it said.