BUSINESS Spending boom in US Black Friday not ‘sustainable'

Spending boom in US Black Friday not ‘sustainable' 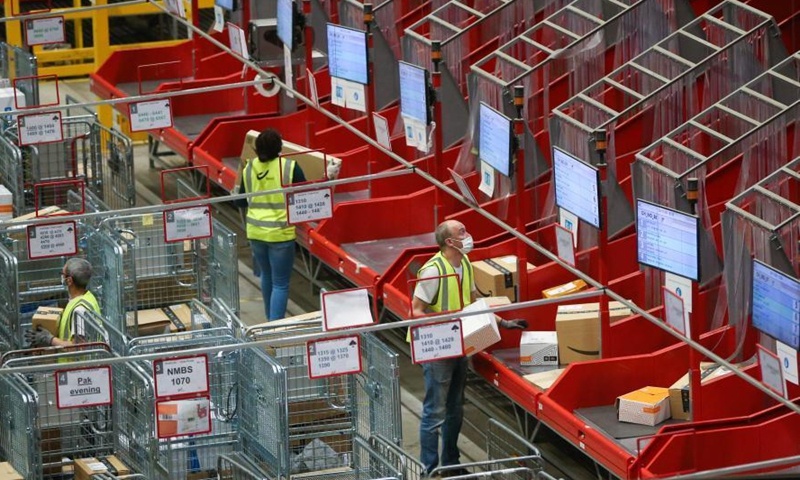 Although this year's Black Friday online sales are expected to set a record high, as the US economy tanks and offline traffic sees a significant reduction amid coronavirus case spikes, it is likely that Black Friday sales could remain flat compared to last year, or even post a small drop, analysts said.

According to estimates by Adobe Analytics, Black Friday is projected to generate $10.3 billion in online sales, a 39 percent bump from a year ago. The Economist estimates that the share of online shopping could close to half of total sales, or $20.6 billion this year.

While the Black Friday sales could offer help to the US economy, analysts noted that consumption could be worse than expected.

"Most of the money American consumers spend on Black Friday is for household items, which is spurred by the country's fiscal and monetary policies. This is not sustainable because once the subsidies are cut, they will immediately halt spending," Tian Yun, a vice director of the Beijing Economic Operation Association, told the Global Times on Friday, noting that such model compares to spending expansion driven by income gains, which leads to "genuine consumption growth."

The US unemployment rate shot up faster than any other developed economies during the pandemic. Jobless claims in the US rose last week to 778,000, underscoring how the COVID-19 could hamper employment in the nation and deprive its residents of income.

A New York-based white-collar worker surnamed Qu told the Global Times on Friday that she bought home appliances, furniture and electronic products online, which cost about $2,000.

"Last year we went out shopping, and I bought shoes, bags, clothes and toys. But this year, the shopping malls are not as busy as last year. The pandemic trapped us at home, which subdued our holiday mood and sank our enthusiasm for shopping," Qu said.

The tariffs imposed on Chinese products during the year-long trade war, which retailers tend to pass on to consumers, also drove up the cost of spending, observers noted.

According to a research paper published by the American Action Forum, US President Donald Trump's tariffs are increasing annual consumer costs by roughly $57 billion annually.

Analysts are also pessimistic on US consumption ability next year as the fallout of the pandemic lingers on. "The chance that Washington will soon release another batch of fiscal stimulus policies is very slim, as the fight for leadership of the Senate between the Democratic Party and the Republican Party is turning white-hot," Tian noted.

In the third quarter, the US GDP grew at a 33.1 percent annualized rate.

For overseas brands that are faring poorly offline during the Black Friday period, the Chinese market that quickly recovered after the epidemic is particularly important, and the improved digital cross-border supply chain network helps reduce cross-border trade costs, which helps overseas brands accelerate their entry into China.

Tmall International said more than 80 US outlet malls entered its overseas direct purchases, and a large number of US retail brands are accelerating their expansion in China. The company said these 80 American outlet stores brought more than 5,000 luxury brands, and more than 120,000 items were stocked at overseas warehouses, and they can arrive to the customers in 72 hours. The turnover of overseas direct purchase of imported goods has increased by more than 120 percent year-on-year since the promotion started.

Jane Zhang, head of marketing operations at DHgate, a B2B cross-border e-commerce of marketplaces in China, told the Global Times that "online sales this Black Friday are expected to reach a record high, given the pandemic restricts offline shopping, and more people stay at home rather than travel."

Due to the pandemic, in-house products are the most popular items, such as fitness machines, mobile phone accessories, kitchenware, and game consoles, and the top five growth categories are toothbrushes, sports toys, towels, wallpaper, and kitchen storage, the company added.