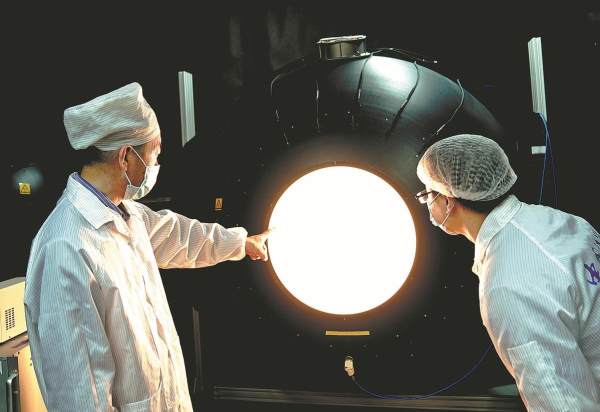 China spent a record 3.09 trillion yuan ($443 billion) on research and development in 2022, a 10.4 percent year-on-year increase that came from the nation's accelerated efforts to enhance its innovation capability for more breakthroughs.

The National Bureau of Statistics said on Friday that China's R&D expenditures accounted for 2.55 percent of the GDP last year, which is 0.12 percentage point higher than the previous year.

That percentage of R&D spending is close to the average of 2.67 percent among OECD (Organization for Economic Cooperation and Development) economies. It moved China to the 12th place globally, ahead of France's 2.35 percent and the Netherlands' 2.32 percent.

Last year, the country spent some 195.1 billion yuan on basic research, a year-on-year increase of 7.4 percent.

"Accelerated efforts will be made this year to again beef up R&D expenditure, especially in some self-developed innovations, and meanwhile to improve the quality of the overall R&D, so as to offer stronger support for tech breakthroughs," Li said.

According to China's 14th Five-Year Plan (2021-25), the country will scale up spending on R&D by more than 7 percent annually during the period to drive more technological breakthroughs.

Consultancy McKinsey and Co said in a report that such a growth target will set the country on the path to becoming the world's largest spender on R&D.

"R&D investment will remain a priority for CATL. We will continue to invest heavily in the R&D of power batteries for more innovations to help drive the electric vehicle sector," said Meng Xiangfeng, an assistant to the company's chairman.

Earlier this week, the State Council, the nation's Cabinet,together with several ministries,rolled out a number of measures to encourage foreign investors to set up R&D centers in the country.

Related departments and provincial-level authorities were also urged to pave the way for introducing overseas talent.

"China has had a very clear and focused strategy over the past decade of investing in high-level research and development," said Maximilian Foerst, president and CEO of Zeiss Greater China, a unit of German optics company Zeiss.

"In other parts of the world,research budget cycles often change with economic conditions.When the economy is not good, the government pulls back," Foerst said.

But in China, there has been constant R&D investment, he said,adding that this may be one of the reasons why companies would like to increase investment in China.