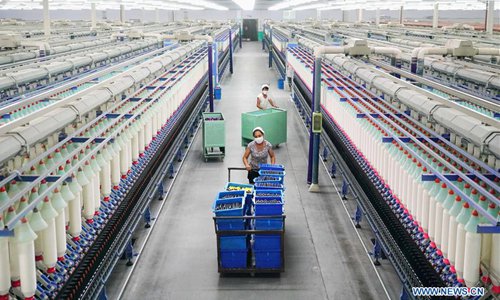 Workers are seen at a spinning factory in Luannan county, North China's Hebei Province on September 12, 2018. There are 58 spinning enterprises in the county, furnishing employment to more than 10,000 people. (Photo: Xinhua)

Recent news reports of layoffs by some Chinese and foreign companies have garnered a lot of attention. Though some of the reports have proven to be inaccurate or exaggerated, the widespread attention has nonetheless underscored persistent concerns over unemployment in China amid domestic and foreign pressures.

Although there are certain challenges in the job market, mostly stemming from an accelerated industrial upgrading, China, with a slew of major policy initiatives, is well positioned to tackle those issues and overcome the potential impact of hiked tariffs on China's exports to the US, analysts said Sunday.

Last week, reports that US technology giant Oracle Corp was shutting down its research and development center in China and laying off nearly 1,000 employees were widely circulated online in China.

While analysts said Oracle's closure might be mainly due to the company's struggling business in China amid rising competition from local players, the news adds to employment concerns as it followed a series of similar reports.

"Even if these were true, they are just individual cases rather than a systemic issue," Sun Lijian, an economist with the China Center for Economic Studies in Shanghai, told the Global Times on Sunday. "There is some pressure but I think the overall employment situation is stable. And we have many policies in place to tackle these issues."

Since the end of last year, Chinese policymakers have focused a lot of attention on the job market.

"This year, for the first time, we are elevating the employment-first policy to the status of a macro policy. This is to increase society-wide attention on employment and support for it," reads this year's Government Work Report delivered in March by Chinese Premier Li Keqiang at the second session of the 13th National People's Congress. The report noted that pressure on job creation is "unabated" and structural issues will be "more pronounced."

Under such a policy tone, Chinese policymakers have adopted a multifaceted approach, with a series of direct and indirect measures to tackle the challenges.

Arguing that maintaining stable economic growth is the key to maintaining employment levels, China has taken measures, including massive stimulus packages and huge tax and fee cuts directed at corporations to help them cope with pressure.

"If we keep growth stable, then we will be able to keep employment stable," Li Daxiao, chief economist at Shenzhen-based Yingda Securities, told the Global Times. "So far, I think things are looking promising."

China's economy grew at a better-than-expected rate of 6.4 percent year-on-year in the first quarter, and several other economic indicators also showed sound recovery.

In the first quarter of 2019, China added 3.24 million urban jobs in the first quarter and registered urban unemployment rate was at 3.67 percent, well below the government target of below 4.5 percent for 2019, according to data from the Ministry of Human Resources and Social Security.

Chinese policymakers have also taken measures to support the private sector, particularly small and medium-sized enterprises, in a bid to stabilize both growth and employment. For example, China vowed to reduce companies' contributions to employee social insurance and cut taxes, totaling 1 trillion yuan ($146.6 billion), to ease their tax burden and to help boost their financial position.

"Though state-owned enterprises are big tax revenue contributors, private companies, including small and medium-sized enterprises, account for more than 90 percent of the total employment, so it's of paramount importance to keep these companies stable," Sun said.

He pointed out that unemployment is mostly related to the fast-paced economic upgrade process that requires more skilled workers rather than hard labor. "It's not that jobs aren't being created. The problem is that some companies can't find suitable skilled talent," he said.

To tackle this issue, China has announced it will invest 100 billion yuan in a massive vocational training program, which is aimed at funding skill training for more than 15 million people this year and 50 million over the next three years.

"I think these are well-thought policies that will not only help keep employment stable in the short term but actually prepare for the long term," Li said. "It's now all about implementation, especially with rising external challenges such as the trade war."

After a truce of a few months and optimism that an agreement to end the trade war was close, the US on Friday escalated tensions by increasing tariffs on $200 billion worth of Chinese goods and threatened to slap duties on more Chinese goods, drawing an anticipated firm response from China.

Analysts said that while the tariff hikes could add to employment pressure in China, the impact will be limited and controllable. "The tariff increase might affect some labor-intensive jobs in the manufacturing sector, but it will not be a major disruption," Sun said.

Arguing that stable economic growth and employment at home are keys in dealing with the US, Liang Haiming, dean of Hainan University's Belt and Road Research Institute, said that China can withstand the renewed tensions.

"China will fight the trade war while also pursuing talks, if we stabilize our economy and employment, then we will be ok," Liang said.