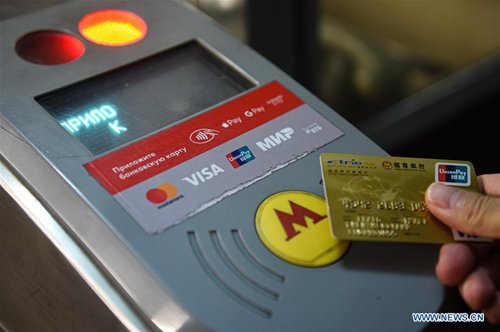 A man uses a China UnionPay card with the "QuickPass" signage to pass through a fare gate during a presentation at a metro station in Moscow, Russia, on Oct. 11, 2019. (Photo: Xinhua)

The Standard Bank of South Africa launched the UnionPay card, both virtual and physical form on the bank's Shyft app, to local account holders on Thursday.

The Shyft app allows for pre-loaded South African rands to be exchanged into multiple currencies and then loaded onto either a physical UnionPay card. Transactions can be made virtually or physically either at South African merchants or in China.

Zhang Luping, general manager of the UnionPay International Africa branch, said the payments company is excited to work with Standard Bank, which is the first African bank to receive the license to issue UnionPay card in the country.

"With the UnionPay card, transacting in China becomes both easier and safer for South African tourists and visitors on business," said Ethel Nyembe, head of card issuing at Standard Bank.

"They can go about their activities and purchase goods from suppliers, for example, in a cashless manner, reducing some of the previous risks involved," she added.

She said the UnionPay card is accepted through most mobile payment apps, which are hugely popular in China.

Nyembe said Standard Bank values South Africa's relationship with China as a trade partner and believes that the signed agreement with UnionPay will allow for further expansion of the Africa-China capabilities corridor.

The UnionPay global acceptance network has expanded to 177 countries and regions so far, covering over 56 million merchants and over 4.6 million ATMs. Outside the Chinese Mainland, UnionPay is accepted at over 28 million merchants and more than 1.7 million ATMs. About 8 billion UnionPay cards are issued in 58 countries and regions, among which over 130 million are issued outside mainland China.