Shanghai's STAR Market is set to change the global competitive landscape of capital-raising hubs, given its fundamental reforms which are friendly to tech companies, but the rising STAR Market still has a long way to go to become a real Nasdaq-like market, experts said. 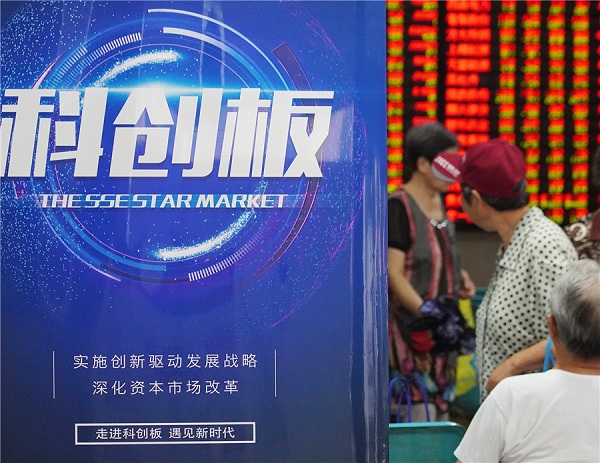 On Tuesday, the first 25 public firms on the new STAR Market retreated after the US Treasury labeled China "a currency manipulator", with only one of them ending higher with the rest registering losses ranging from 4 to 15 percent.

But such considerable losses could not erase the profits the new listings had earned for investors－share prices of the 25 companies rose by an average of 29 percent from their offer prices as of Tuesday.

This happened despite that escalations in trade tensions triggered by the US administration's new tariff threat had weighed down major global stock markets, including China's A-share market.

The benchmark Shanghai Composite Index ended lower for the fourth consecutive trading session on Tuesday, down 1.56 percent at 2777.56 points, the lowest since late February.

Relatively robust gains of the STAR's new listings have led to heated discussion among investors about whether future world-class high-growth tech firms are among them and later peers, changing the scenario that overseas markets had captured most floats of Chinese tech giants, such as Tencent and Alibaba.

These reforms, with registration-based initial public offering reforms as the core, may pose a "challenge" to the growth in overseas IPOs of mainland-based firms, many of whom may choose to go public at home on the STAR Market, said Ge.

"There has already been some shake-up, with several IPOs set to list in Hong Kong canceling their applications to instead float in Shanghai," said law firm Baker Mckenzie's report, citing the example of biomedical storage equipment producer Qingdao Haier Biomedical Co Ltd, whose IPO application was accepted by the Shanghai Stock Exchange in April.

"For mainland-based companies seeking IPOs, they are likely to receive higher valuations on the STAR Market than on bourses outside the mainland, giving the board a big advantage," said Zhu Ning, deputy dean of the National Institute of Financial Research at Tsinghua University.

A higher valuation of an IPO means that stocks are offered to investors at a higher price and that the company raises more money from the IPO.

The valuation premium comes from investors' higher recognition and the preference of local enterprises, as well as the paucity of investment targets－a large amount of domestic funds chase a rather small number of high-tech listed firms, said Zhu, who is also a professor at the Shanghai Advanced Institute of Finance at Shanghai Jiao Tong University.

Being a public company on the STAR Market may also mean receiving more policy support than on overseas markets, as the country tries to facilitate development of the STAR Market and technological innovation, Zhu said.

Nevertheless, the STAR Market may be eclipsed by some overseas peers when it comes to promoting a company's globalization, such as improving corporate governance in accordance with international standards, according to Zhu.

Xue Yi, a finance professor at the University of International Business and Economics in Beijing, echoed Zhu's views and said, "For Chinese tech companies regarding financing as the main purpose of going public, the STAR Market is attractive given its valuation premium."

For companies seeking the enhancement of their reputation through IPOs, however, the Nasdaq might be, at this stage, a better choice than the brand-new STAR Market, Xue said, adding that the IPO standards of the STAR Market may still be too strict for some innovative startups.

For instance, the expected total market capitalization of a new applicant at the time of listing must be at least HK$150 million ($19.15 million) for Hong Kong's growth enterprise market for small-and medium-sized enterprises, well below the 1 billion yuan for the STAR Market.

"Despite the debut of the STAR Market, many mainland-based firms will still seek overseas IPOs, partly as the new board does not allow overseas institutional investors to take part in the IPO process," said Li Qiang, regional co-managing partner of Asia at DLA Piper.

The absence of overseas institutional investors, especially those from the United States, not only restricts companies' access to funds but dents their pricing efficiency during IPOs, according to Li.

"US institutional investors, experienced with registration-based IPO systems, would require high-quality information disclosure and be capable of understanding them to price a stock," Li said, adding that introducing overseas institutional investors to the IPO process will help boost the STAR Market's attractiveness to tech companies.

For the STAR Market to become a real Nasdaq-like market that attracts quality tech firms and fosters them into world-class leaders, it must generate long-term investment returns and maintain ample liquidity, which requires minimizing administrative intervention in price formation and strengthening investor education, said Zhu.

As of Tuesday, the SSE has accepted 149 IPO applications on the STAR Market, with 28 of them having got final approval from securities regulators.