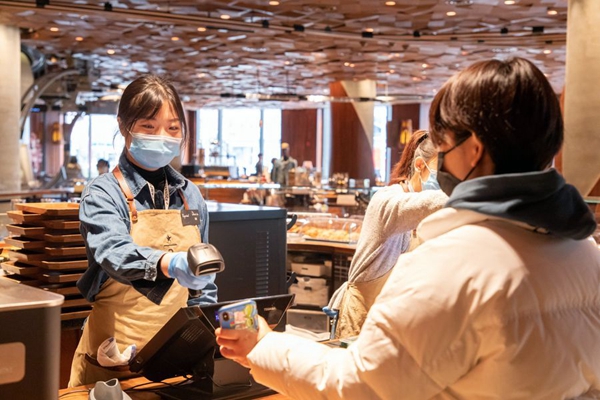 Zero-contact ordering and mobile payments are adopted in the store in Shanghai, Feb. 26, 2020. (Photo: Xinhua)

Chinese people are eating more meat than ever before. As the world's most populous country and second largest economy, China is an enormous consumer of meat, devouring almost a third of global supply. Meat consumption has quadrupled in the country over the last 30 years and is predicted to carry on increasing.

However, a growing number of Chinese consumers, motivated by environmental concerns, animal welfare issues and health incentives, are choosing to reject a meat-based diet. According to Xinhua, there are now over 50 million vegetarians in China.

With vegetarian diets gaining traction, Starbucks has teamed up with Beyond Meat, Inc. to bring plant-based menu items to the Chinese mainland for the first time, hoping to tap into a rising demand for meat-free options. Each dish features Beyond Beef, which replicates the taste and texture of minced beef, and will be offered in pasta, a lasagne, and a spicy and sour wrap.

"Our new menu items make it easy and enjoyable to explore new lifestyles that are good for the planet," explained Leo Tsoi, chief operating officer of Starbucks China in a statement.

Founded in 2009, Beyond Meat, Inc. is a U.S. producer of plant-based meat substitutes. The company's products are made from simple plant-based ingredients and designed to deliver the versatility and juiciness of real meat.

"We mark an important milestone as Beyond Meat launches in China, advancing our goal of increasing accessibility to planet-based protein globally," said Ethan Brown, Beyond Meat, Inc. founder and CEO, in a statement.

For Starbucks, the new menu items could play an important role in helping the business recover from the adverse impact of COVID-19. Most of the company's Chinese stores have now reopened, but sales remained relatively modest as of their most recent update.