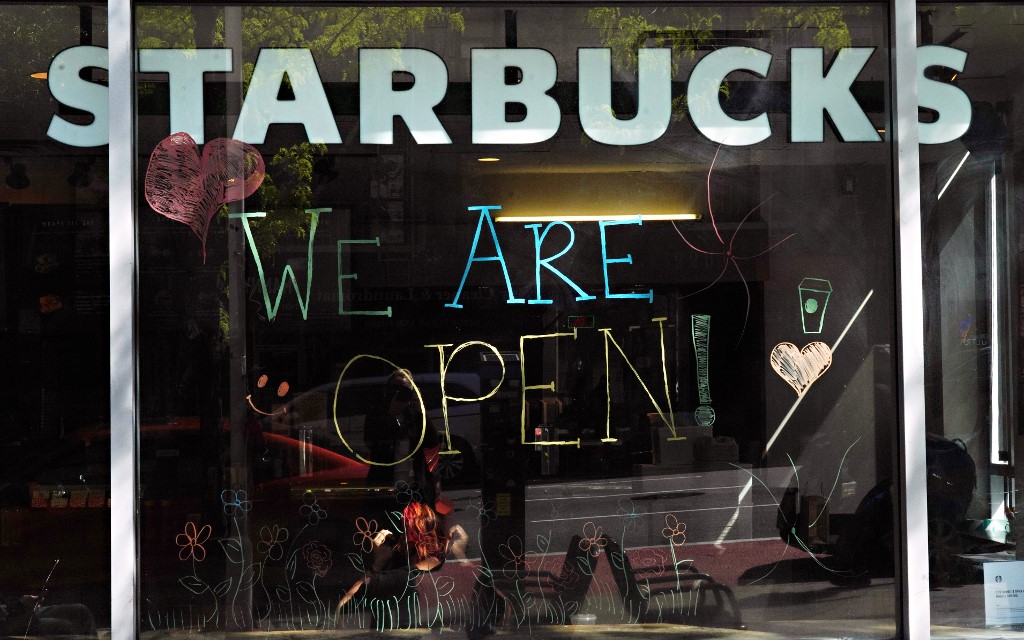 In this file photo taken on May 10, 2020, a window at Starbucks reads 'WE ARE OPEN!' during the coronavirus pandemic on in New York City. Starbucks reported a drop in quarterly profits on January 26, 2021. (Photo: AFP)

Starbucks reported a drop in quarterly profits Tuesday as it staged a partial recovery from the most severe stretch of Covid-19 restrictions.

The coffee giant continued a gradual recovery from an unprofitable quarter in the middle of 2020 as it returned to comparable sales growth in China and suffered a smaller decline in the United States compared with the year-ago period, but revenues nonetheless lagged analyst estimates.

"Our results demonstrate the continued strength and relevance of our brand," said Chief Executive Kevin Johnson.

"We remain optimistic about our robust operating outlook for fiscal 2021 as well as our ability to unlock the full potential of Starbucks to create value for our stakeholders."

The company reported fiscal first-quarter profits of $622.2 million for the quarter ending December 27, down 29.8 percent from the year-ago period on a 4.9 percent drop in revenues to $6.7 billion.

Starbucks lifted its full-year profit forecast, but projected second-quarter profits below Wall Street analyst expectations, placing more of the expected improvement for later in the year.