The central government has intensified measures to stabilize prices of key farm produce after consumer prices rose at their fastest pace in almost eight years, with experts calling for the establishment of long-term mechanisms to protect farmers' interests. 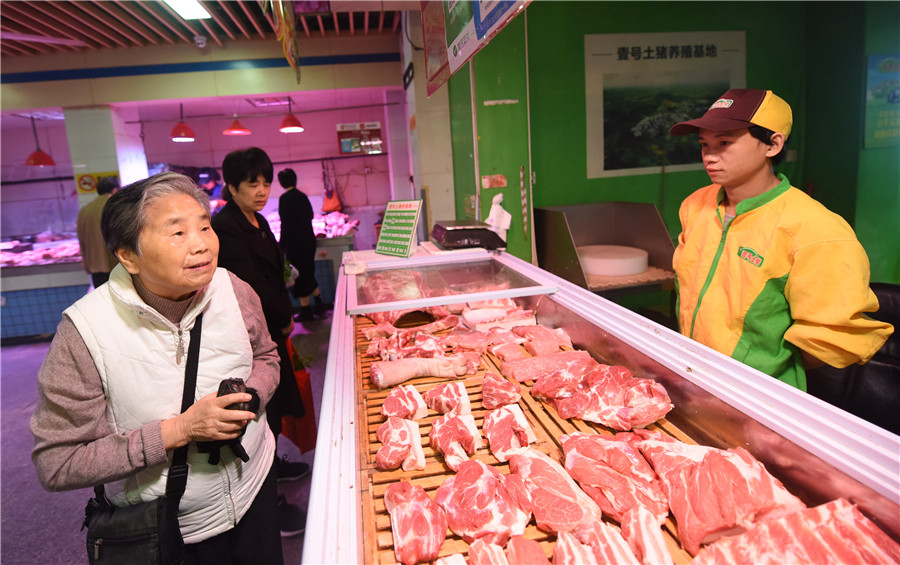 The State Council, China's Cabinet, said in a statement following an executive meeting on Wednesday that it will introduce more measures to restore hog production, including steps to remove unjustified bans on pig farms.

It was the fourth executive meeting in three months at which the Cabinet has adopted steps to address surging pork prices, as African swine fever ravaged the country's hog herds and drove up pork prices.

The bureau said the rise was driven largely by steep climbs in the prices of pork and other meats, with pork prices more than doubling year-on-year in October.

Soaring pork prices contributed 2.43 percentage points to the CPI growth, and spilled over to the prices of beef, mutton and chicken. The wholesale pork price reached 51.18 yuan ($7.31) a kilogram on Friday, the Ministry of Agriculture and Rural Affairs said.

Premier Li Keqiang said at the meeting that stabilizing commodity prices is a key factor in ensuring macroeconomic stability and highlighted the importance of adopting methods in keeping with market principles.

The Cabinet decided at the meeting to boost the production of poultry, beef and mutton, and to tap into food reserves to ensure supplies of key farm produce and curb price hikes.

It also urged local governments to activate a mechanism that links social assistance with price increases and to issue subsidies in a timely manner to ensure the basic needs of those living in poverty are met.

Zhu Zengyong, a Chinese Academy of Agricultural Sciences researcher who focuses on the pork sector, said the shortfall in domestic pork supply this year underlined the importance of long-term mechanisms to stabilize hog production and protect the legitimate interests of farmers.

"A major concern of the hog business was uncertain policies and lack of consistency in policy implementation," he said, adding that it is important for the authorities to correct the misconception that restoring hog production conflicts with protecting the environment.

The spread of African swine fever has slowed in recent months, but increased hog production will bring about heightened risk, he said, meaning disease prevention remained a daunting task.

"The establishment of an effective disease prevention system is a key to restoring hog production," Zhu said.

He warned the impact of the surge in pork prices on the CPI could peak before the Spring Festival celebrations in January, a period of peak demand for the country's most popular meat.

Pork prices were not expected to drop until the second half of next year, when hog production was expected to slowly recover, Zhu said.

Data from SCI International, a provider of commodity market information, shows China's pork prices are now at a historic high that has dented consumer demand, with only 15 percent of the country's slaughterhouses open for business.

The Cabinet meeting also underscored the need to continue with unrelenting efforts to ensure grain production to guarantee the country's full self-sufficiency in grain supply.

It set a goal of developing 67 million hectares of high-quality farmland by 2022, enough to ensure annual grain production capacity of over 500 million metric tons.

The Ministry of Agriculture and Rural Affairs said in September that the country's grain output from all farms last year was 657.89 million tons.