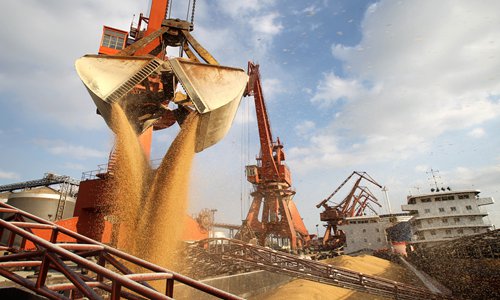 Recent trade talks between China and the US have yielded positive results, laying the foundation for reaching a deal before the March 1 deadline and sending out positive signals to global markets. State-owned grain trading company COFCO said Saturday that it had again purchased millions of tons of US soybeans, a move to implement the consensus reached by the two countries' top leaders, according to a statement published on its website. The latest round of China-US trade talks made "important progress" for the current stage the two sides had "candid, specific and constructive discussions," the Xinhua News Agency reported.  Global markets were cheered up on Friday over progress reached in the latest talks between the world's two largest economies, as the escalated trade war had sent turbulence through the markets and darkened economic outlook worldwide. Stock markets posted mixed gains Friday, with US futures set for a modestly higher open, but European shares gave back early gains, according to US financial site thestreet.com. Soybean futures on the Chicago Board of Trade (CBOT) rallied almost 2 percent on Friday to a seven-week high after China's commitment to buy more US agricultural products, like 5 million tons of soybeans which US President Donald Trump described as "a tremendous purchase."This development lowered the expectation for some major soybean exporters such as Brazil, according to an industry representative. "Soy prices in CBOT tend to reflect a more balanced scenario, in which US products will not be undervalued compared to other sources, like Brazil and Argentina," Daniel Furlan Amaral, chief-economist of the Brazilian Association of Vegetable Oil Industries (ABIOVE), told the Global Times.Brazil's association of vegetable oil producers has cut its estimate of soybean exports in 2019 by 5 percent.It has been the most constructive discussion between the two sides since the trade war began, which showed sincerity on both sides, said Wei Jianguo, former Chinese vice minister of commerce. "Delegations from China and the US had looked into trade issues and thoroughly studied them to find a way of reaching a concrete deal before the deadline in March," he said. If China and the US fail to come up with a deal before the 90-day truce ends, tariffs on Chinese goods will increase to 25 percent, which, as many exporters believe, will have a significant impact on bilateral trade. Increasing tariffs will also weigh on American business, which purchases a sigificant amount of Made-in-China products every year.The International Monetary Fund cut its global economic outlook and warned of the risks of trade disputes in January, and said failure to resolve trade tensions could further destabilize a slowing global economy, Reuters reported. "Proper handling of the divergence between China and the US not only impacts the two countries but also global economic recovery," Wei said, noting that the two sides felt the urgency to defuse tensions. During the latest round of trade talks, the two sides touched on the trade balance, technology transfer, protection of intellectual property rights, non-tariff barriers, the services sector, agriculture and an enforcement mechanism.As China-US relations are reciprocal, the US needs to make some good gestures to China to make sure a trade deal will be reached, said Mei Xinyu, a research fellow at the Chinese Academy of International Trade and Economic Cooperation."While Beijing promises to buy more American goods and to expand market access to US firms, Washington should move forward on some issues, such as tightened export controls to China," Mei added.Besides the purchase of more US soybeans, there is more room to buy additional US goods such as energy products, aircraft and automobiles as part of efforts to reduce the US trade deficit with China. More containmentNotwithstanding the good momentum of trade talks, the US seems to be hastening its offensive against China in various sectors. In a Saturday article, CNN said US intelligence warned that China was using "student spies" to steal secrets from the US. Unnamed lawmakers and intelligence officials were quoted as saying that the Chinese are "notorious" for their patriotism and nationalism that could allegedly "coerce them into carrying out acts of espionage." On Friday, the Wall Street Journal reported that the US Energy Department said it would ban its scientists and employees from participating in talent-recruitment programs sponsored by China and other countries.The department oversees 17 national laboratories conducting advanced research in such areas as nuclear physics and supercomputing.This is not the first time US officials have accused Chinese students of espionage, while Chinese students, based on official US data, accounted for over 30 percent of the country's international students in 2018. China has repeatedly denied such accusations, urging a more rational and objective perspective on normal people-to-people exchanges. Meanwhile, the recent arrest of Huawei executive Meng Wanzhou by Canadian authorities on the request of the US remained an unresolved issue, casting a shadow over the future development of China-US relations.With the Trump administration highlighting competition with China and calling China the top security threat and rival, more containment actions are expected to come from the US this year, said Li Haidong, a professor at the Beijing-based China Foreign Affairs University.Instead of allowing 2019, which marks the 40th anniversary of China-US diplomatic ties, to be defined by conflicts primarily triggered by the US, China is eyeing more constructive efforts for mutually beneficial relations, Li said.The greatest achievement of China-US relations during the past decades is that the two sides maintained stable and cooperation-driven ties, and that there is no reason for it not to be sustained, Li added.