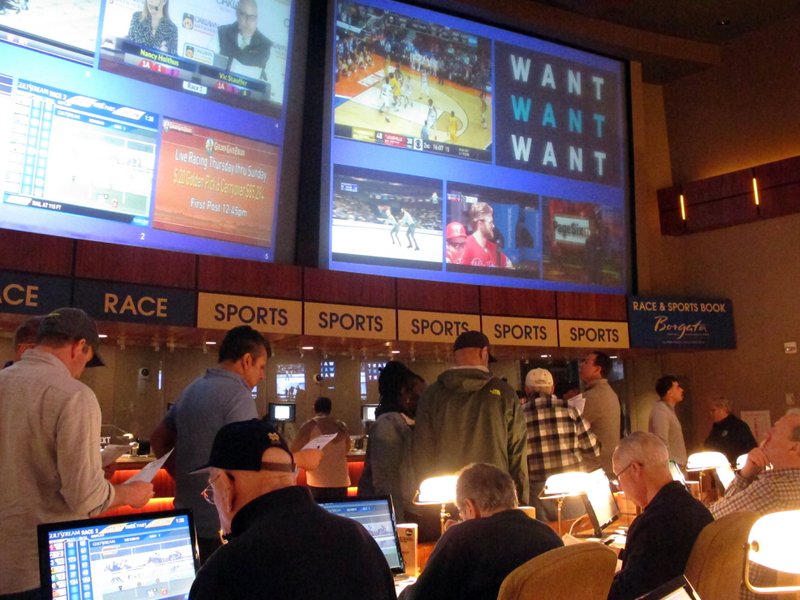 Gamblers line up to place bets on the NCAA men's college basketball tournament at the Borgata casino in Atlantic City N.J, March 21, 2019. This is the first March Madness tournament since legal gambling expanded last year in the U.S. The spread of legalized sports betting is largely following regional boundaries. (Photo: AP)

In the year since the US Supreme Court cleared the way for every state to legalize sports betting , a regional divide has opened as states decide whether to expand their gambling options.

By year’s end, legalization is possible in a dozen states in the Northeast and Midwest. But most states in the Deep South and far West — SEC and Pac-12 territory in college sports — are staying on the sidelines, at least for now.

State lawmakers are weighing the benefits of a slight boost in state revenue and the ability to add consumer protections against concerns about the morality of allowing another form of gambling. Sorting out complex business interests and opposition from some casino-operating tribes also has emerged as thorny challenges.

It’s not clear whether legalization will happen in all corners of the country over the next few years or if opposition will keep it concentrated in the regions where it’s already taken root.

With just two exceptions, the Deep South states have been among the most resistant to legalizing sports betting. In Louisiana, a legalization bill passed the Senate earlier this year but died in the House.

“We have all of the ills of gaming,” Martiny said during a committee hearing, “but none of the benefits.”

Opponents such as Rep. Valarie Hodges, also a Republican, said gambling preys on the poor and that the state should find a better way to pay for early education.

“What we legalize, we legitimize,” she said.

Hodges’ side prevailed in the legislative debate, aided by a dispute among gambling interests over whether sports betting should be limited to the state’s 16 casinos and four racetracks or also available at 2,800 truck stops and other locations with video poker terminals.

Before the May 2018 Supreme Court ruling that allowed sportsbooks across the country, full-service ones were running legally only in Nevada. Last year, they opened in seven more states. So far this year, sports books have been legalized but haven’t yet begun operating in another five, plus the District of Columbia.

Bills are awaiting signatures from the governors in Illinois, Maine and New Hampshire. Colorado voters will decide the matter for that state in November. In Oregon, the state lottery is working on regulations with the plan of launching sports betting under existing law in time for the start of the NFL season.

Four more states are considering legalization during their current legislative sessions, but most legislatures have wrapped up their work for the year. Lawmakers in 18 states rejected sports betting legalization bills for 2019, according to a tally of legislation by The Associated Press.

There are several other states where lawmakers might have an appetite for legalization, but there isn’t agreement in the complicated and tightly regulated gambling industry on how or whether to do it.

A common factor in those places, including California and Florida, is the prevalence of casinos operated by Native American tribes. Agreeing to allow sports betting might mean the tribes would face increased competition.

Chris Grove, a gambling industry strategist at Eilers & Krejcik, said he expects several states — mostly in the Northeast and upper Midwest — to legalize sports betting in the next year, and then for the spread to slow because the remaining states are reluctant to allow gambling generally or because of tribal influence.

“As you move farther west, the more complex the stakeholder picture and the harder it is to get anything done,” he said.

But Bill Pascrell III, a lobbyist for some gambling companies, expects that even some states that have been traditionally reluctant to legalize gambling will allow sports betting in the future. He points to Tennessee, a state without any casinos, deciding to legalize online sports betting.

The absence of sports gambling in California, Texas and Florida, the nation’s most populous states, leaves a gaping hole in the industry. They are home to more than a quarter of the teams in the four major professional sports and have about the same combined population as all the states that have adopted legalized sports betting, including those where bills have been sent to governors but not signed into law.

Other states, including Utah and South Carolina, are unlikely to welcome sports betting anytime soon because it’s difficult to sell any form of gambling there.

Over the past year, states with legal sportsbooks have reported about $9 billion in bets being made. But sportsbooks are a relatively low-margin business for their operators, who pay taxes only on how much they win, not how much is gambled.

According to their most recent financial reports, three of the states with legal sportsbooks are on pace to bring in far less than they expected in taxes their first fiscal year. Mississippi is bringing in about half of what it needs each month to reach an informal state target. Rhode Island and West Virginia are both on pace to bring in 20% to 30% of their expected revenue, according to an AP analysis.

Even in New Jersey, where mobile betting has caught on quickly , sports betting taxes amount to far less than 1% of all state revenue.

Washington state Rep. Derek Stanford, the Democratic chairman of a committee overseeing gambling activity, said he thinks the state is not ready for sports betting, and that’s a reason none of the three bills to legalize it there gained traction this year.

He said the state needs to work through concerns ranging from the effects of legalized sports betting on public health to figuring out how it would affect tribal casinos.

“My sense is that we don’t want to be the ones breaking new ground here,” he said. “If other states are doing this, we can see what experience they have.”