BUSINESS Stock crashes in US, Europe signal end of boom

Stock crashes in US, Europe signal end of boom 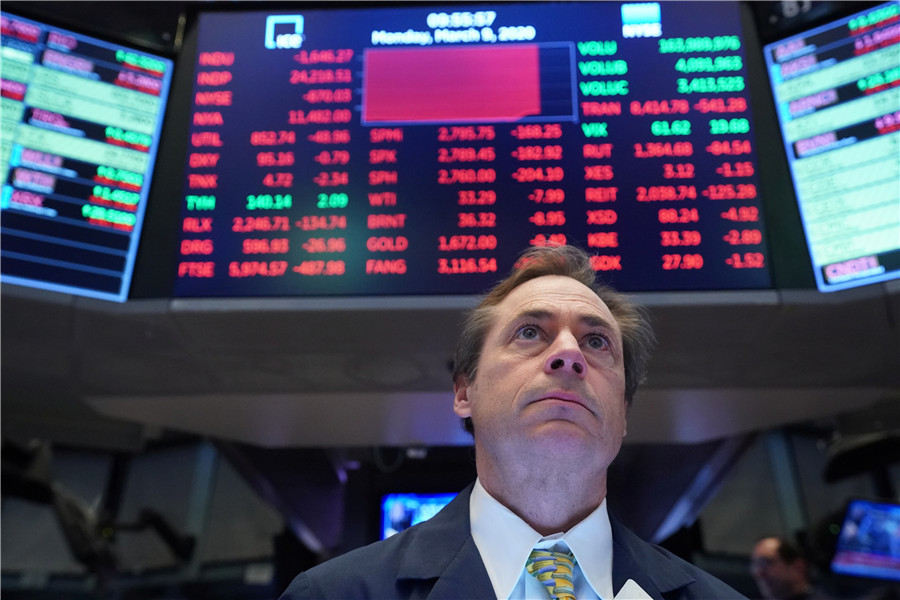 A company's stock market valuation should, at least theoretically, reflect the expected discounted value of the future profits of that company. But, even worst-case scenario predictions of the expected direct short-term economic effects of the novel coronavirus outbreak on company profits come nowhere close to explaining the extreme volatility and net sharp declines of the United States and European stock markets of the last two weeks. Instead, the markets are signaling that investors fear there are deep systemic problems with Western macroeconomic policies.

Is the US Federal Reserve Banks' 20-year policy of very low interest rates and extreme liquidity reaching the point where it can no longer stimulate the real economy? Will high consumer debt finally stop the long boom? Will the rapid rise in the elderly population strain government budgets so much that the long dependence on government borrowing will become untenable?

We are likely seeing the start of a long-term reduction in Western economic growth rates and a long period of very poor stock market performance.

In a March 12 research note, JPMorgan Chase predicted that the US economy would decline 2 percent in the first quarter year-on-year and 3 percent in the second while the eurozone would decline 1.8 percent and 3.3 percent in the same periods. Most other forecasters are less pessimistic. If followed by a recovery in the second half and a permanent return to normalcy, these numbers would indicate relatively small reductions in the future profitability of large listed corporations in most sectors. (Small companies might be hit much harder.)

As of the market close on Wednesday, US stock markets had declined about 30 percent from all-time highs reached less than a month ago. In a surprise Sunday evening announcement, the Fed announced that it would cut its target interest rate to zero and also would carry out a huge $750-billion quantitative easing program. Ordinarily, stock prices would rise in response to such a massive liquidity injection.

Instead US stocks fell about 13 percent on Monday, with much smaller drops in other markets. They recovered 6 percent on Tuesday but fell more than 5 percent on Wednesday. This sharp net fall, which was contrary to expectations, shows that market participants have lost confidence in the ability of the Fed's monetary policy to solve economic problems.

The Shanghai Composite Index is an outlier in that it fell about 10 percent during the time of the virus. The index fell sharply during the first week of the crisis from Jan 22 to Feb 4, but then recovered through February and early March, indicating confidence in the government's virus containment and economic recovery policies. But it fell again after March 11 when it became clear that the US and European economies would be heavily impacted by the epidemic. On net, the Chinese stock markets have roughly been flat over the last year, even after the beginning of the outbreak. This indicates that investors believe that the virus has not significantly reduced the long-term value of Chinese listed companies.

How would a significant slowing of the US and European economies affect China? Certainly, Chinese exporters to these regions could be affected since they each receive about 19 percent of Chinese exports. However, China's exports to the Asia-Pacific region are 38 percent of total exports, about equal to the US and Europe combined. The US/Europe slowdown will push China's manufacturers to continue their reorientation toward domestic consumers and toward African, Asian and other Belt and Road participants.

The relatively good performance of the Chinese A-share market since the epidemic started may also attract foreign investors fleeing the disastrous performances in their home markets. In the past few years, Chinese regulators have taken big steps to further open their financial markets to international players, so Chinese companies will likely become a larger part of international portfolios.

This US-European crisis has been a long time coming.

The US stock markets had a very long and unprecedented bull run for the past 11 years. The S&P 500 index rose 4.6 times from December 2008 to February of this year. During last year alone, it rose almost 20 percent, but the epidemic has wiped out more than two years of increases.

No one believes that the huge increases in the US markets actually reflected real increases in company productivity. A market correction was coming and the epidemic was just a trigger. The big question is: Are we seeing a normal market correction or are we seeing a fundamental re-evaluation of the economic policies that have driven the US economy over the last 20 years?

European losses since the start of the virus are even greater. The FTSE index of the London Stock Exchange was down 32 percent in the past month (Feb 19 to March 18) and the Frankfurt DAX index was down 38 percent, indicating extreme concern about the future of European economies. Both the FTSE and the DAX were largely flat for the five years preceding the epidemic, so these declines represent huge declines in the long-term wealth of investors in these markets.

In March 2001, the US tech markets collapsed. The Nasdaq index fell more than 50 percent. The Fed responded with interest rate cuts. Despite some halfhearted attempts to slow money growth, this low interest rate policy continued throughout the 2000s. In a surprise to economists, inflation remained low, but the additional money flowed into the housing and consumer debt markets－leading to the 2008 financial crisis.

To solve that crisis, the Fed further lowered interest rates and began a long program of quantitative easing－directly buying bonds and other assets. This money again flowed into stocks and housing－creating the 11-year boom in the US markets. The market response to the Fed announcement on Sunday reflects long-standing doubts about the sustainability of this liquidity-driven boom.

By increasing the price of assets, primarily stocks and residential real estate, the 20-year low interest rate policy has been fantastic for already-affluent people, who saw the value of their portfolios soar. But average working people in the US have seen stagnant wages, except for small raises in the last three years, and have little if any savings. Consumer debts have risen sharply, healthcare costs have soared and young people have been hit by debt caused by dramatic increases in university tuition. Again, the consumption-driven US boom could not be sustained.

Demographic changes are also causing a long-term economic shift. In the next few years, the last of the post-World War II baby boomer generation will retire－causing a rapid rise in European and US government payments for pensions and healthcare. The US and other governments have taken advantage of the low interest rate period to increase their borrowing. This allowed the government to ease short-term problems and avoid hard choices. But it cannot be sustained indefinitely.

The eurozone economic model depends on international debt. Since 2011, Germany has run a current account surplus exceeding 6 percent of GDP, even though doing so violates European Union rules. A trade surplus may sound like a good thing, but what it actually means is that Germany is lending money to other countries, largely Southern European countries, to buy its products. This cannot last forever. The direct impact of the novel coronavirus pandemic is likely to be relatively small, but the impact on the already very fragile Italian economy is likely to provoke another Eurozone financial crisis. It could be the tipping point that stops an unsustainable system.

Stein's Law, named after Herbert Stein－chairman of the US Council of Economic Advisers under presidents Nixon and Ford－famously stated: "If something is unsustainable, it will stop."

The 20-year macroeconomic policy of very loose monetary policy, debt-driven consumption and rising inequality driven by asset price increases was unsustainable. The boom had to stop at some point－we just didn't know when.

The 2020s are going to be difficult years for the US and European economies anyway. The stunningly large drops in the stock markets are signals that people are realizing that the long boom is over.