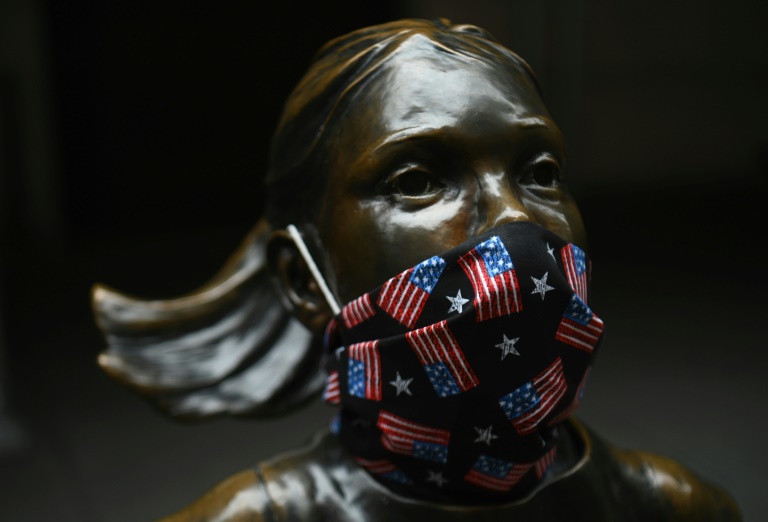 A symbol for the markets' pain: The 'Fearless Girl' statue near the New York Stock Exchange. (Photo: AFP)

Stock markets struggled on Friday as hopes of quickly finding a treatment for coronavirus were dashed, analysts said, and more crushing economic data delivered a body blow to confidence.

Reports said initial trials of the remdesivir coronavirus drug being developed by Gilead Sciences had flopped.

"This was a ray of hope earlier this week and already we're learning the pitfalls of getting too excited about these cures at the early stages of testing," Erlam told AFP.

Key European markets were all lower at the close, while Wall Street trod water throughout the morning session in New York.

Michael Hewson, at CMC Markets UK, said markets would probably be "swinging around" in coming weeks on the success or failure of antiviral and vaccine trials "as investors look for crumbs of comfort".

European equities were knocked also by news that EU leaders are divided over the size of a financial rescue package to stimulate the bloc's economy, left battered by the pandemic.

"They seem to have agreed on the idea of a recovery fund while leaving the details for a future date," Erlam said.

The United States has approved nearly half a billion dollars in new stimulus but European leaders were split on their own measures as the world sought to salvage economies hammered by the coronavirus pandemic.

German business confidence plummeted to a record low in April as firms fret over the COVID-19 fallout, the closely-watched Ifo survey said, describing morale as "catastrophic".

The institute's monthly business climate index tumbled to 74.3 points, down from March's 85.9 points.

JP Morgan Asset Management strategist Hannah Anderson warned that while some countries were moving to ease lockdowns and the virus was growing at a slower rate, dangers remain ahead.

"It is important to not conflate medical and economic data," she said in a note.

"Obviously a deceleration in infection rates is a positive development for the economy, but progress in combating this awful disease is not the same as returning the economy to the place it was" in late 2019.

"Investors need to understand that the risks associated with lifting public health measures too early could further exacerbate market pain," she added.

Oil was volatile, following a 20-percent surge for WTI on Thursday triggered by a new flare-up between Washington and Tehran.

Iran warned the US of a "decisive response" after President Donald Trump said he had ordered the US Navy to destroy Iranian boats that harass American ships in the Gulf.

But storage facilities are near to bursting with demand almost non-existent -- a situation that sent the May contract for WTI to minus $40 this week.

On currency markets the pound fell against both the euro and the dollar after the EU's chief Brexit negotiator accused Britain of stalling in ongoing post-Brexit negotiations.

A round of talks on Friday brought scant progress, raising the possibility that the current transition period will end without a deal on crucial areas such as trade and fishing.