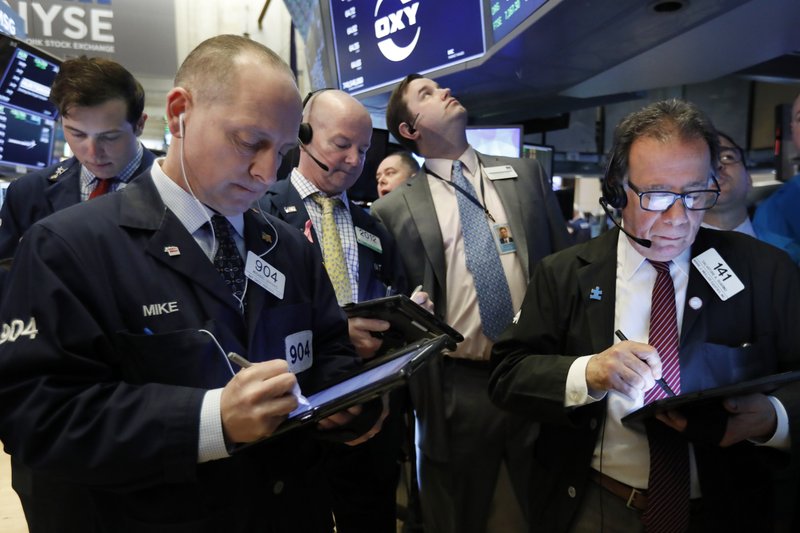 The wave of selling knocked 460 points off the Dow Jones Industrial Average and gave the benchmark S&P 500 index its worst day since Jan. 3. The Russell 2000 index of smaller company stocks fell more than the rest of the market as traders offloaded risker assets.

Worried investors shifted money into bonds, which sent yields much lower. The yield on the 10-year Treasury dropped to 2.43 percent from 2.54 percent late Thursday, a big move.

The slide in bond yields hurt bank stocks which, along with technology companies, accounted for much of the broad decline in stocks. The utilities sector was the only one to eke out a gain.

Smaller company stocks are often the first to be sold by investors looking to reduce risk, which explains why the Russell 2000 was down more than the rest of the market. Small companies, which are more dependent on the U.S. economy than big multinationals, tend so suffer more in economic downturns.

“When investors feel nervous about the economy and the outlook for the stock market, they want to sell the riskiest types of stocks, and that would definitely be small caps,” Kravetz said.

Despite wavering from gains to losses throughout the week, the S&P 500 index is still up more than 11 percent so far in 2019, which still counts as a blockbuster start to a year.

The fear that gripped investors Friday was fueled by a steadily dimming outlook for the global economy. China, the world’s second-largest economy after the United States, is weakening. And other economies that depend heavily on purchases in China have suffered as a result.

Factory production in the euro currency alliance, for instance, has fallen at its steepest rate in about six years. In Germany, Europe’s largest economy, a survey of purchasing manager manufacturers posted its sharpest production drop in nearly six years. Orders to German factories have also tumbled.

Key bond yields fell this week to their lowest levels in more than a year after the Federal Reserve said it was seeing slower growth in the economy and no longer expected to raise interest rates this year.

The yield on the benchmark 10-year Treasury note, which is used to set rates on mortgages and many other kinds of loans, is now sharply lower from its recent high of 3.23 percent in early October.

In another worrying sign, the yield on the 10-year Treasury note fell Friday below the yield on the three-month Treasury bill. When that kind of “inversion” in bond yields occurs, economists fear that it can signal a recession within the coming year. That signal isn’t always correct, however.

The prospects of slowing global economic growth has motivated investors to rebalance their holdings as they “digest the new reality,” said Marina Severinovsky, investment strategist at Schroeders. “We’re sort of coming back to Earth.”

Central banks have been positioning themselves to deal with the slowdown, she said, and that includes the Federal Reserve’s expectations for no rate increases this year.

Earlier this month the European Central Bank said it would push back the earliest date for interest rate increases. It also said it would offer ultra-cheap loans to banks, supporting their ability to keep lending.

“It’s very positive that, not just the Fed, but other policy makers have acknowledged the situation is kind of dangerous on the global slowdown and are taking action,” Severinovsky said.

Boeing dropped 2.8 percent after Indonesia’s flag carrier became the first airline to seek to cancel an order of 737 Max 8 jets, which have been involved in two fatal crashes in the past six months.

Nike stumbled 6.6 percent after disappointing sales in its vital North America market fell short of analysts’ forecasts and it warned of a sales slowdown.