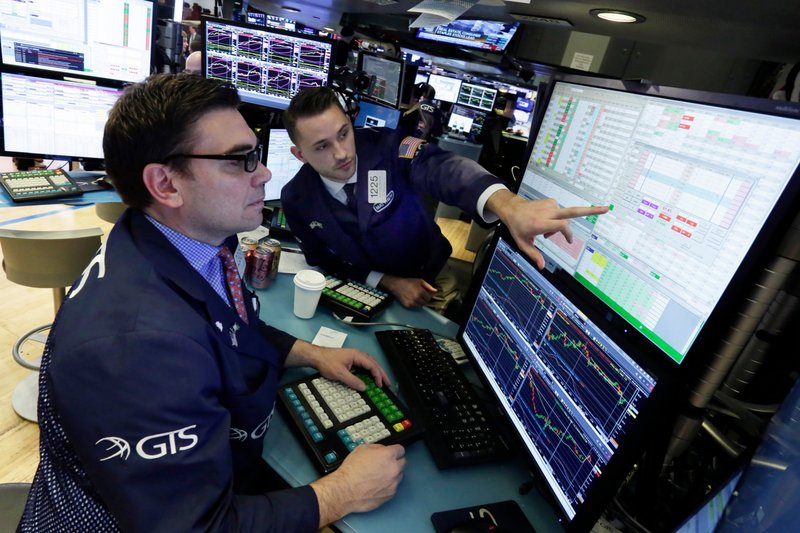 Stocks are ending the week the way they began it: tumbling as investors worry that tariffs and harsh words between the US and China will touch off a trade war that derails the global economy. That came with the US considering duties on an additional $100 billion in goods imported from China.

The stock market has changed direction again and again this week as investors tried to get a sense of whether a trade dispute between the two nations will escalate. Technology companies, banks, industrial and health care stocks are sinking. The market didn’t get any help from a March jobs report that was weaker than expected.

The administration spent the past few days reassuring investors that it’s not rushing into a trade war, and China’s government has done the same. But late Thursday, President Donald Trump ordered the US Trade Representative to consider placing tariffs on an additional $100 billion worth of Chinese imports. China said it would “counterattack with great strength” if that happens.

Stocks dipped further after Trump criticized the World Trade Organization on Twitter Friday morning and the losses worsened in the afternoon.

The Dow average, which contains numerous multinational companies including industrial powerhouses Boeing and Caterpillar, has swung dramatically this week, with about 1,300 points separating its lowest point Monday afternoon from its high late Thursday. It’s down 1.3 percent for the week.

At the start of the week, the US announced plans to put tariffs on $50 billion in goods imported from China, and the Chinese government responded with measures of equal size. Stocks plunged on Monday, but they rallied over the next few days as officials from both countries said they were open to talks and that the tariffs might never go into effect.

With administration officials sounding conciliatory one day and more hostile the next and the president always quick to fire off another tweet, investors simply don’t know what the US wants to achieve, said Katie Nixon, chief investment officer for Northern Trust Wealth Management.

“The process itself seems to be quite chaotic,” she said. “We’re not quite sure what the long term strategy is.”

Still, she said businesses support the idea of making changes in America’s trade relationship with China. Even though investors are optimistic about the state of the global economy and company profits continue to grow, Nixon said the administration is creating the thing investors hate the most: uncertainty.

Technology companies make a lot of their sales in Asia and they have struggled as Wall Street worries about a slowdown in global economic growth. Optimism about the world economy has helped many tech companies make huge gains in the last year. Industrial companies might face the worst pain from tariffs, as they could find themselves dealing with higher costs for components imported into the US while the duties on their goods in China harm their sales.

Employers added 103,000 jobs in March, which is weaker than the last few months. The Labor Department also said fewer jobs were added in January and February that it initially estimated. The unemployment rate remained low and the job market looks fundamentally healthy, but it’s possible some employers are struggling to find workers.

Benchmark US crude dropped $1.48, or 2.3 percent, to $62.06 a barrel in New York while Brent crude, used to price international oils, lost $1.22, or 1.8 percent, to $67.11 per barrel in London. Oil prices fell almost 5 percent this week as investors wondered if an increase in trade tensions will reduce demand for oil by slowing down the global economy.

Bond prices rose, sending yields lower. The yield on the 10-year Treasury fell to 2.78 percent from 2.83 percent. The lower yields mean banks can’t make as much money from lending, and that send bank stocks lower.