BUSINESS Stocks down on fears over second wave as lockdowns ease

Stocks down on fears over second wave as lockdowns ease

Fears of a second wave of coronavirus infections in some parts of the world weighed on equities Tuesday, bringing a dose of hard reality to markets after weeks of rallies fuelled by the easing of lockdown measures and hopes for economic recovery. 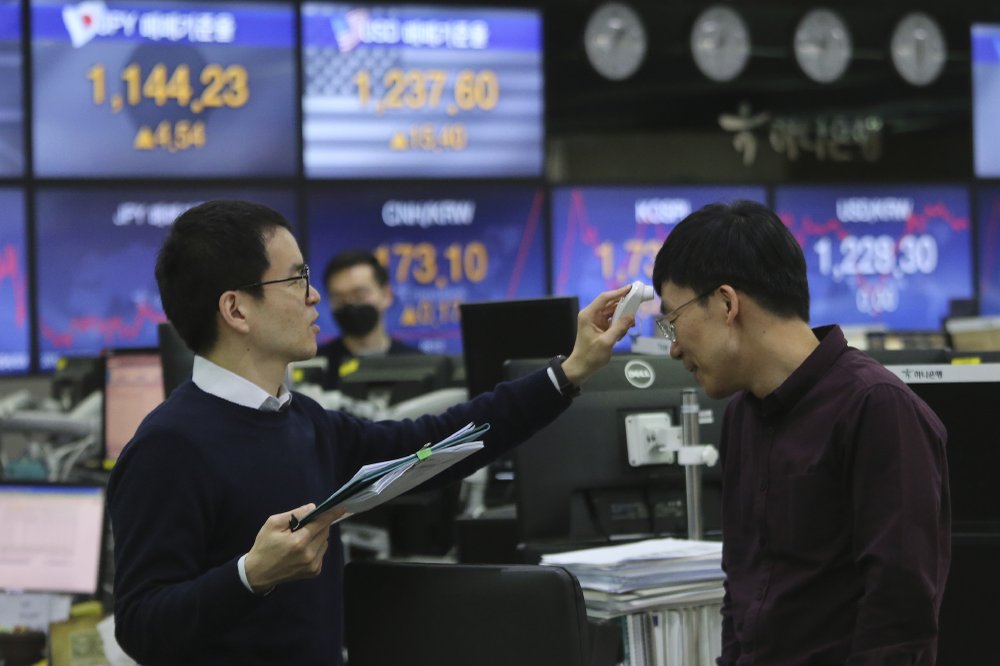 A currency trader checks the temperature of his colleague at the foreign exchange dealing room of the KEB Hana Bank headquarters in Seoul, South Korea, Friday, April 3, 2020. (Photo: AP)

As some of the worst-hit countries including Spain, Italy and France take heart from slowing death and infection rates, they are gradually allowing businesses to open up and try to get back to some semblance of normality.

However, after weeks of no new cases, China's Wuhan reported six new infections in two days and South Korea announced its biggest spike in new cases for more than a month.

The news jolted confidence on trading floors and weighed on regional markets Tuesday.

Manila and Jakarta also fell, though Wellington edged up slightly.

"Indications abound that increased mobility will lead to re-occurrences of the virus, which will change the slope of the recovery," said AxiCorp's Stephen Innes, noting that news reports had generally emphasised the negative elements of reopening.

"While markets may eventually desensitise to mini-cluster outbreaks, provided death statistics remain static... at this stage, it does not lessen fears of a significant secondary spreader, which will undoubtedly weigh on consumer sentiment and hurt the rebound."

He added that investors would have to expect such uncertainty until a vaccine is available.

How long to recover?

The losses come after a healthy rally across equity markets from troughs reached in March as the disease began to take hold around the world and forced nations to lock down, effectively closing the global economy and pushing it into an expected recession.

And, while there are forecasts that growth will bounce back, there is discussion over how quickly that will happen.

"It's well and good to say 'OK, we've contained the disease', but how long does the recession last?" Chris Rands, at Nikko Asset Management, said.

"Typically when you look at unemployment spikes they take years to fix, they don't fix themselves in three months."

Oil prices edged up, taking some joy from news that Saudi Arabia would slash an extra million barrels per day from its June output, leaving it with just short of 7.5 million, which ANZ said would be the lowest since 2002.

Top crude producers agreed last month to slash output by 10 million barrels a day from May 1 after prices crashed to below zero as lockdowns to contain the coronavirus pandemic sapped global demand and supplies swelled.