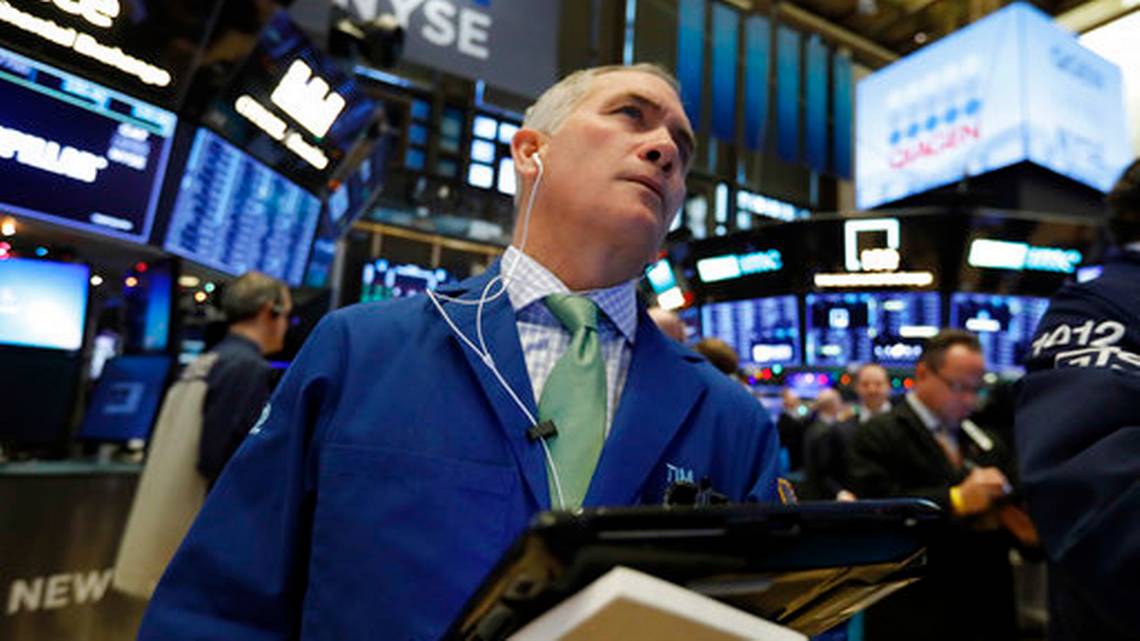 Major US indexes fell about 2 percent and the Dow Jones Industrial Average dropped as much as 563 points. On the benchmark S&P 500 index, health care and technology companies absorbed the worst losses.

Johnson & Johnson plunged by the most in 16 years after Reuters reported that the company has known since the 1970s that its talc Baby Powder sometimes contained carcinogenic asbestos. The company denied the report.

China said industrial output and retail sales both slowed in November. That could be another sign that China's trade dispute with the US and tighter lending conditions are chilling its economy, which is the second-largest in the world. Meanwhile, purchasing managers in Europe signaled that economic growth was slipping.

Sameer Samana, senior global market strategist for Wells Fargo Investment Institute, said investors are concerned that weakness will make it way to the US They're wondering if the US economy is likely to run out of steam sooner than they had thought.

"Market consensus has been that the next recession is probably in 2020 or beyond," he said. Now, he said, the market is "really testing that assumption and trying to figure out whether it's sooner."

Rising interest rates and tighter credit conditions are adding to investors' nervousness because they both tend to slow down economic growth. This week the European Central Bank said it is ending a bond-buying program that has pumped trillions into Europe's economy. The Federal Reserve is expected to increase US rates again on Wednesday, as it's been doing for the last three years. It may also shed light on whether it plans to raise rates further in 2019.

For more than 20 years, China has been one of the biggest contributors to growth in the global economy, and when investors see signs the Chinese economy is weakening, they expect it will affect other countries like the US that sell things to China.

In Europe, the index of purchase managers fell in France, which is racked by protests, to a level that points toward economic contraction. Germany's reading still pointed to growth, but it fell to its lowest level in four years.

Those reports canceled out some potential good news on trade: the Chinese government announced a 90-day suspension of tariff increases on US cars, trucks and auto imports. It's part of a cease-fire that China and the US announced earlier this month to give them time to work on other issues.

December is typically the best month of the year for stocks as a "Santa Claus rally" often adds to the year's gains. With 10 trading days left this month, however, the S&P 500 is down 5.8 percent. That followed a small gain in November and a steep 6.9 percent drop in October.

Reuters reported that court documents and test results show Johnson & Johnson has known for decades that its raw talc and finished Baby Powder sometimes contained asbestos, but that the company didn't inform regulators or the public. The company called the story "false and inflammatory."

In July the company lost a lawsuit from plaintiffs who argued that its products were linked to cases of ovarian cancer and mesothelioma. A St. Louis jury awarded plaintiffs $4.7 billion. Johnson & Johnson faces thousands of other lawsuits.

Oil prices again turned lower, as a slower global economy would weaken demand for oil and other fuels. Benchmark US crude fell 2.6 percent to $51.20 a barrel in New York. Brent crude, used to price international oils, dropped 1.9 percent to settle at $60.28 a barrel in London.

European Union leaders rejected British Prime Minister Theresa May's request to make changes to their deal covering Britain's departure from the EU on March 29. British legislators aren't satisfied with the terms May negotiated, and she canceled a scheduled vote earlier this week because it was clear Parliament wouldn't approve it. Britain's economy and financial markets across Europe face severe disruption without an agreement.