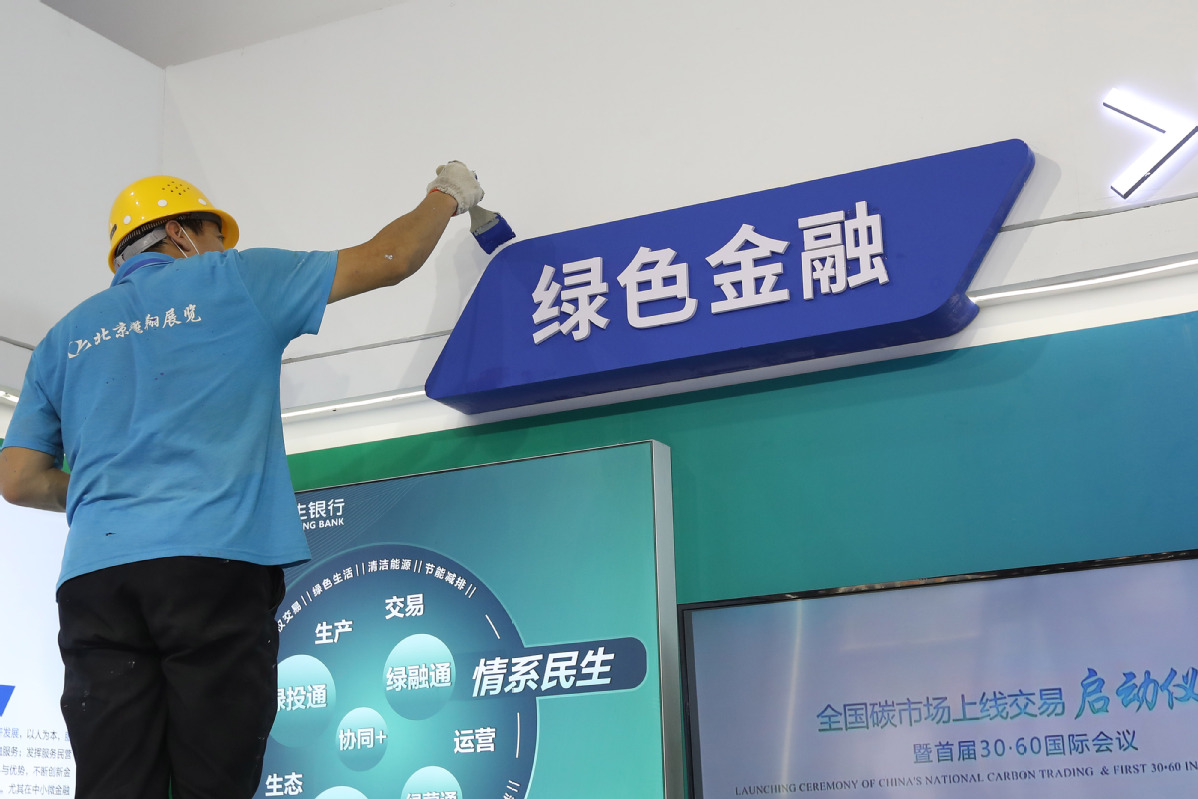 A booth promoting green finance is prepared at the China International Fair for Trade in Services in Beijing on Sept 1. (Photo: China Daily)

China has streamlined climate-related information disclosure standards for financial institutions, an important part of its policy system to foster the transition to green development by effectively leveraging financial resources.

The People's Bank of China, the central bank, published guidance for such disclosures recently, marking the nation's first set of standards requiring the reporting of an annual operating overview, environment-related governance structure, environmental risks, the impacts of financing activities and green finance innovations.

Following the guidance, more specific standards for commercial banks, insurance businesses and asset management and trust fund companies will be issued, according to a PBOC document that China Daily viewed.

It was a remarkable step as financial regulators recognized climate risks may influence investment results or even the macroeconomic growth picture.

Based on information disclosure requirements, it is suggested that financial institutions conduct a climate stress test and scenario analysis, build a governance and management system and also improve climate risk assessments before and after issuing loans, said Ma Jun, chairman of the Beijing-based Green Finance Committee of China Society for Finance and Banking.

Some six years ago, the Financial Stability Board, a global organization of financial regulatory bodies, created the Task Force on Climate-related Financial Disclosure, or TCFD. This program was under the chairmanship of Michael Bloomberg, the former mayor of New York, aiming to promote and achieve the goal of the United Nations' Paris climate agreement.

This year, the TCFD has provided new guidance to help companies disclose more consistent metrics and more about their plans for the transition to a low-carbon economy, their targets and progress over time.

The task force found that disclosure in line with the TCFD's recommendations has accelerated over the past year, up by 9 percentage points from 2019 to 2020, compared to the 4 percentage point growth from 2018 to 2019.

It reviewed more than 1,650 company reports, from 69 countries and jurisdictions in eight industries. About 83 of the world's largest 100 companies now support or report in line with the TCFD's recommendations, the report said.

"The support base has grown by over a third, with more than 1,000 new organizations becoming supporters in the past year," said Mary Schapiro, head of the TCFD and former chairwoman of the US Securities and Exchange Commission. TCFD supporters have grown to 89 countries and nearly all sectors of the economy, with a market capitalization of over $25.1 trillion, a 99 percent increase since last year.

"Forward-looking investors have long requested climate risk information, recognizing that they cannot make well-informed capital allocation decisions without understanding the financial implications of climate change on the companies they seek to invest in," Schapiro said.

As an expert who has participated in the TCFD program for six years, Liu Ruixia, chief expert of the Task Force of Climate Risk Management at the Industrial and Commercial Bank of China, witnessed the efforts and progress made by the Chinese banking industry in green and low-carbon transitions.

Chinese regulators encourage financial institutions to support TCFD. ICBC, the country's largest bank by assets, is one of the first supporters of TCFD, and other banks, including China Construction Bank, Bank of China, Bank of Communications and Postal Savings Bank of China, have announced their support of the project this year, according to Liu.

"In order to promote TCFD guidance among Chinese institutions, we have helped translate TCFD documents into Chinese, and provided our suggestions to TCFD in order to better implement its guidance in China," Liu said.

More financial institutions have incorporated climate risk into enterprise risk management and worked on optimizing their credit portfolio. More institutions are improving their climate-related disclosure under the "four pillars of governance"－strategy, risk management, metrics and targets－laid out in TCFD recommendations.

"When companies disclose clear, consistent and accurate information on the risks they face from climate change, investors and business leaders can make more informed and sustainable financial decisions. That strengthens our global economy, improves health and helps address the climate crisis," said Bloomberg, chairman of the task force and founder of Bloomberg LP and Bloomberg Philanthropies.