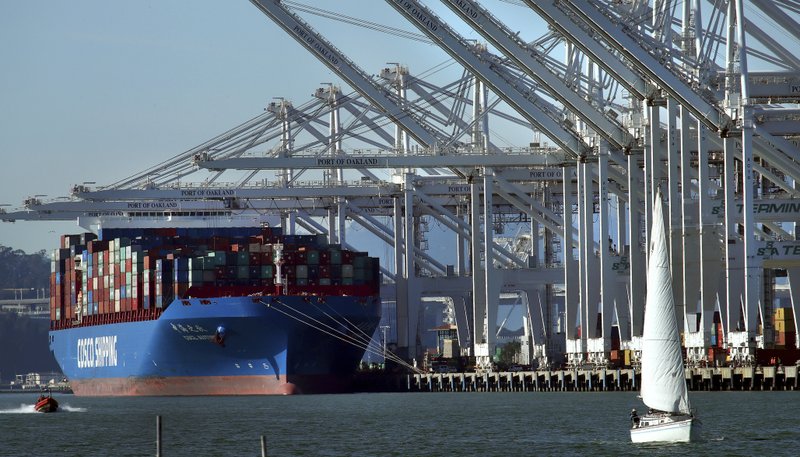 The US economy has turned in a stellar performance this year. But mounting problems, from trade tensions to jittery financial markets and political gridlock in Washington, are expected to sharply slow growth in 2019.

The Commerce Department estimated Friday that the economy, as measured by the gross domestic product, grew at a brisk 3.4 percent annual percent rate in the July-September quarter. That was barely down from an estimate of 3.5 percent that the government made a month ago. That performance followed a sizzling 4.2 percent annual growth rate in the April-June quarter.

And analysts have said they think growth has remained solid in the current October-December quarter, with many forecasting annual growth of around 2.5 percent to 2.8 percent.

That would put the economy on track to record growth for all of 2018 of around 3 percent. It would be the best performance since 2005 and well above the tepid annual growth rates of roughly 2 percent that have prevailed since the recession officially ended in 2009.

President Donald Trump has often cited the upturn in growth this year as evidence that his economic program is succeeding. Economists agree that the $1.5 trillion tax cut Congress passed a year ago, along with a boost in defense and domestic spending approved by Congress in February, helped fuel growth this year.

But an array of risks lie ahead. They range from a slowing global economy, disruptions caused by the tit-for-tat trade war between the United States and China, higher borrowing costs for consumers and businesses as the Federal Reserve raises interest rates to control inflation and the potential shock to business and consumer confidence shaken from steep declines in stock prices.

Adding to those problems was a new element of uncertainty. A fight between Trump and Democrats in Congress over providing money for Trump’s proposed wall along the US-Mexico border appeared to be a harbinger of battles ahead as Democrats take control of the House in January.

“We have a dysfunctional government in Washington, and that is just adding to all the uncertainty about the economy,” said Sung Won Sohn, chief economist at SS Economics. “The political fights are coming on top of uncertainty over how the trade fight with China will get resolved and where the Fed goes next with monetary policy.”

The Fed raised its key policy rate on Wednesday for the fourth time this year but reduced its estimate of the number of rate hikes for 2019 from three to two. Still, the Fed’s actions and a news conference by Chairman Jerome Powell failed to ease fears on Wall Street that the central bank may overdo its rate tightening and end up pushing the economy into a recession.

Stocks plunged this week, extending a slide in which the major US indexes have shed more than 11 percent in December.

John Williams, the president of the Fed’s New York regional bank, sought to ease those concerns Friday. Williams noted that the Fed had changed the wording in its policy statement this week to say it “judges” that “some” further rate hikes will be needed, instead of saying that it “expects” further hikes. Williams said this was an effort to underscore that the Fed will be watching to see how the economy performs before deciding to boost rates next year.

Sohn said he expects growth to slow to around 2.3 percent next year.

“I don’t expect we will have a recession, but there will be a significant slowdown,” he said.

Mark Zandi, chief economist at Moody’s Analytics, said he expects growth to slow only slightly to 2.7 percent in 2019. But then he foresees a much sharper slowdown to around 0.9 percent growth in 2020.

“I think the economy will come to a virtual standstill by the spring of 2020,” Zandi said. “The government stimulus in the form of tax cuts and extra spending will have faded by then, and the economy will be struggling with higher interest rates.”

The Trump administration foresees a rather sunnier economic future. It projects that after reaching 3 percent growth this year, the economy will achieve sustained annual growth rates of around 3 percent over the next decade.

Treasury Secretary Steven Mnuchin called the market’s sell-off on Wednesday after the Fed’s rate hike “completely overblown.” He noted that the US economy was still growing “significantly higher” than in Europe and other parts of the world.

In a statement Friday noting the one-year anniversary of Congress passing the $tax cut, Mnuchin said, “Tax cuts and regulatory relief actions by the Trump administration have led to more investment in America, strong economic growth, higher wages and more Americans going back to work.”