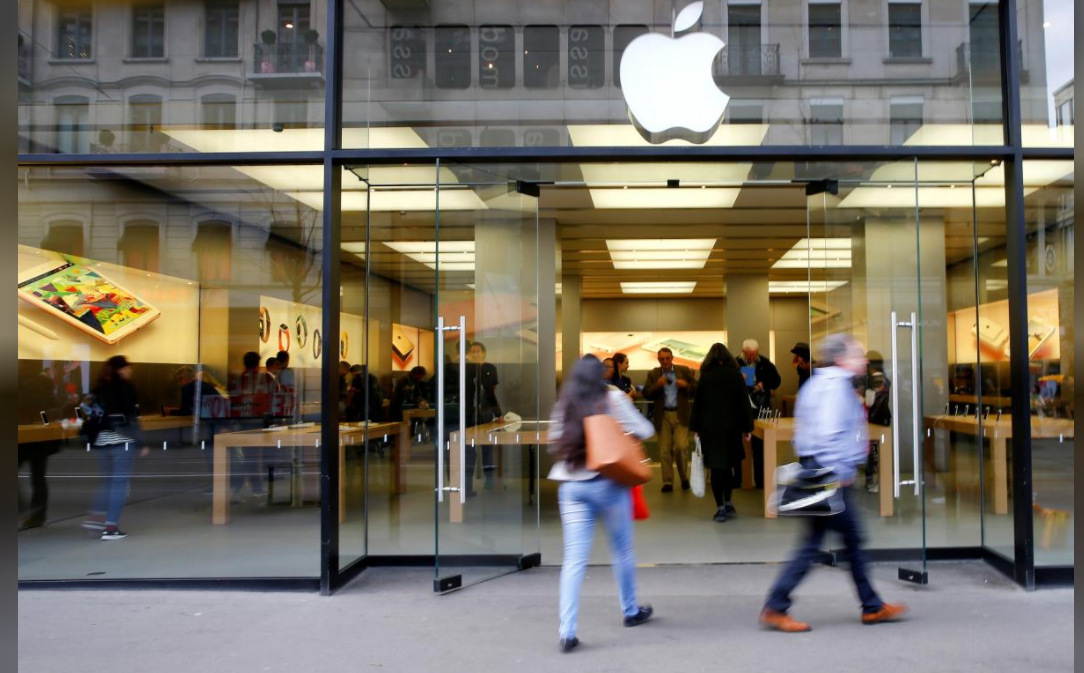 People walk in front of a branch of US technology company Apple in Zurich, Switzerland April 5, 2016. Photo: Reuters/Arnd Wiegmann

Apple Inc on Thursday gave a disappointing revenue and profit forecast for the first three months of 2018 and its sales of iPhones over the holiday quarter missed Wall Street’s expectations, deepening concerns that enthusiasm for the iPhone has permanently waned since its 2015 peak.

Apple forecast revenue of $60 billion to $62 billion and gross margins of between 38 percent and 38.5 percent for its fiscal first quarter ending in March. Analysts were expecting $65.7 billion in sales and a gross margin of 38.9 percent for the March quarter, according to Thomson Reuters I/B/E/S, though some had forecast sales as low as $60 billion. The stock had declined to its lowest point since November in recent weeks.

Bright spots in the fiscal first quarter ended Dec. 30 included average selling prices for the iPhone that topped Wall Street expectations, driven by demand for newer models like the iPhone X. Apple’s shares, after initially falling, ticked up about 1 percent to $169.50 in after-the-bell trading.

The company’s chief financial officer, Luca Maestri, hinted at what Apple will do with its cash pile. At the end of the December quarter, Apple had about $285 billion in cash, cash equivalents and short- and long-term marketable securities.

In an interview with Reuters, Maestri said Apple plans to balance its cash and debt.

“Over time, we are trying to target a capital structure that is approximately net neutral. We will have approximately the same level of cash and debt on the balance sheet,” Maestri said. “We’re going to take that balance down from $163 billion to zero,” he said, referring to Apple’s current level of cash net of debt.

Maestri did not say whether the reduction in net cash would come in the form of returning capital to shareholders or capital expenditures.

The restrained revenue forecast comes after Wall Street analysts widely agreed that Apple had trimmed its expectations for the March quarter for the $999 iPhone X, the first major rework of the company’s best-selling product since 2014. Analysts said the iPhone X had come into supply-and-demand balance - meaning that Apple was able to keep the phone in stock on store shelves - earlier than they had expected.

The weak expectations for the March quarter could signal that while Apple’s diehard fans are willing to pay the iPhone X’s steep price, the new phone remains too expensive to tempt mainstream shoppers, especially in countries like China. Those customers may opt instead for older, cheaper iPhone models that Apple has kept in its lineup.

The holiday quarter is typically Apple’s largest, accounting for more than a third of its revenue as fans line up for its newest offerings, but Wall Street often looks to the March quarter for clues about how well products launched during the holidays will carry over to mainstream buyers.

However, average selling prices for iPhones were stronger than Wall Street expected during the holiday - $796 versus expectations of $756.

“It was really driven by the success of the iPhone X and also the iPhone 8 and iPhone 8 Plus,” Maestri told Reuters in an interview. “The new lineup has done incredibly well.”

Analysts are counting on increased selling prices for iPhones as one factor that will help Apple continue to increase revenue even as unit sales flatten out.

Apple’s services business, which includes Apple Music, the App Store and iCloud, grew 18 percent to $ 8.4 billion, missing analyst expectations of $8.6 billion. Maestri said the lower services revenue was because the holiday quarter was only 13 weeks rather than 14 weeks. He also said Apple’s installed base of active devices reached 1.3 billion, 30 percent higher than two years ago and representing an expansion of potential customers for the services business.

The company has focused on expanding services as the smart phone market has matured, improving margins along with sales.

Apple said it expected its tax rate for the March quarter to be 15 percent following changes in US tax law. The company said last month it plans to make a one-time tax payment of $38 billion on its overseas cash and has a five-year, $30 billion US capital expenditure plan. Unlike many companies that took large one-time charges under the US tax law, Apple had set aside cash for years ahead of time to fund the $38 billion payment.

The company did not say how much of its overseas cash it would bring back to the United States in the short term and gave no new information about its capital return program, which it typically updates each April.