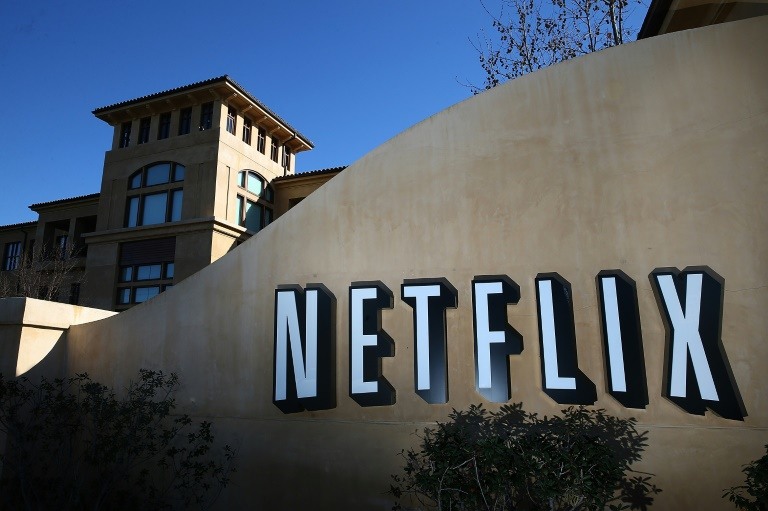 California-based Netflix reported it now has 125 million worldwide subscribers, as it boosted revenues and profits in the first quarter (Photo: AFP)

Netflix added 7.4 million new subscribers in the past quarter as the global television giant ramped up profits with its strongest-ever revenue growth since launching its streaming service.

In its quarterly update Monday, Netflix reported profits grew 63 percent from a year ago to $290 million, while revenues jumped 43 percent to $3.7 billion.

The California-based video giant, which has been on a tear with original programs including "The Crown" and "Stranger Things," saw its shares surge 6.5 percent in after-hours trade on the stronger-than-expected results.

Netflix has raised its subscription fees as it expands globally to nearly 200 markets and invests heavily in original programming.

The company plans to invest up to $8 billion this year in new TV series, films, documentaries and other programs in several languages "to serve the diverse tastes of our growing global membership base," the company said in its letter to shareholders.

Recently released programs include the sci-fi thriller "Altered Carbon" and "A Series of Unfortunate Events."

Earlier this month, Netflix pulled out of the Cannes film festival in a dispute over rules for French media releases.

The move came in response to a new Cannes rule banning from the competition movies that are not first released in French cinemas.

In its letter Monday, Netflix said the decision was made because of a stipulation that if a film is in competition at Cannes, it can not be watched on Netflix in France for the following three years.

"We would never want to do that to our French members," the letter said.

"We will continue to celebrate our films and filmmakers at other festivals around the world but unfortunately we will have to sit out Cannes for now so that our growing French membership can continue to enjoy our original films."

Netflix added 1.96 million new US members in the quarter and 5.46 million internationally.

The international segment now accounts for 55 percent of memberships and 50 percent of revenues.

Netflix this year won its first Academy Award this year for the documentary "Icarus" on doping in sports.

"We're thrilled when the creators with whom we partner are recognized for their exceptional work," the statement said. "The Oscar win helps to reinforce that Netflix is a great home for both documentary lovers and creators."