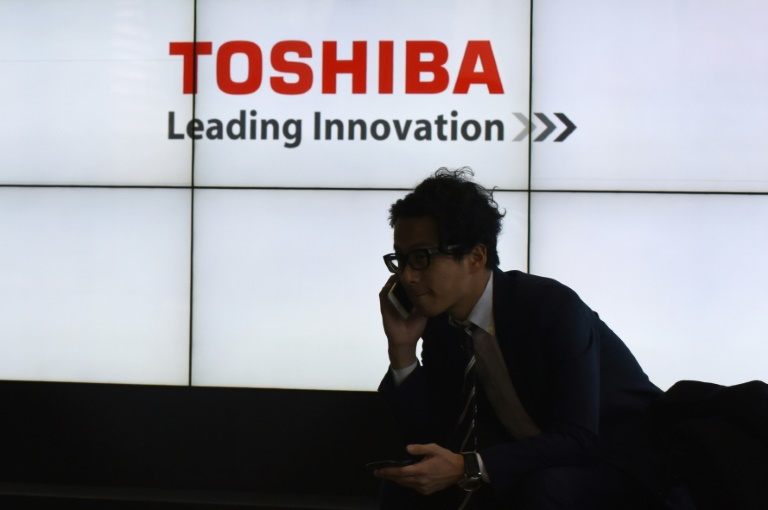 Toshiba is bouncing back after a terrible year.(Photo: AFP)

Struggling Japanese conglomerate Toshiba said Tuesday it had bounced back into the black after a disastrous year and will avoid a humiliating delisting from the Tokyo stock exchange.

"We were able to exit from a critical situation by eliminating excessive debt at the end of March," Toshiba's new chief executive Nobuaki Kurumatani told a news conference.

"I personally regard it as the starting line for us... for transforming into an excellent company that can survive competition with global excellent companies," he said.

That marks the first net profit for the firm in four years and was helped by one-off revenue from tax cuts linked to the sale of its nuclear units.

Toshiba had been on the ropes after its disastrous acquisition of US nuclear energy firm Westinghouse, which racked up billions of dollars in losses before being placed under bankruptcy protection.

Those losses came to light as the group was still reeling from revelations that top executives had pressured underlings to cover up weak results for years after the 2008 global financial meltdown.

In order to survive and avoid delisting, the cash-strapped group decided on the multibillion-dollar sale of its prized chip business to a consortium led by Bain Capital.

The chip unit brought in around 90 percent of Toshiba's total operating profit in the first six months of the fiscal year 2017 and was the crown jewel in a vast range of businesses ranging from home appliances to nuclear reactors.

At the time the deal was seen as crucial to keeping it afloat after multi-billion-dollar losses.

On Tuesday, Toshiba said it was still waiting for Chinese antitrust authorities to approve the key sale but denied speculation that it was considering reversing course in the deal.

In November, Toshiba said it planned to raise 600 billion yen by issuing new shares, a move aimed at avoiding delisting even if the chip business sale is delayed.

The firm said it expected a net profit of 1.07 trillion yen for the current year to March 2019, up 33.1 percent from the previous year, on sales of 3.6 trillion yen.

Investors cheered the results, with Toshiba shares closing up 3.46 percent at 299 yen in Tokyo.

Hideki Yasuda, an analyst at Ace Research Institute in Tokyo, warned that the sale of the chip business would be crucial.

"We are paying close attention to the fate of its memory chip business. The cancellation of the deal will change the company's strategy significantly," Yasuda told AFP.

"Toshiba needs to create a fresh source of profit, but it is likely to take two to three years to find and foster it."