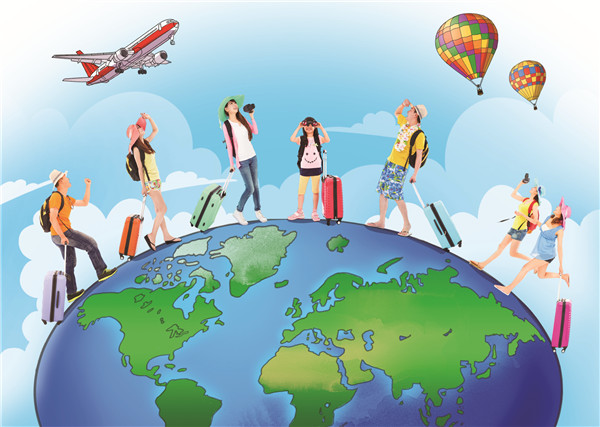 As graduation season gets underway in June and July, graduates are departing to different destinations to celebrate the start of a new chapter in their lives.

For graduation trips, Chengdu in Sichuan province, Guangzhou in Guangdong province, Chongqing, Shenzhen in Guangdong and Hangzhou in Zhejiang province were listed as the top five most popular destinations for domestic tours. Thailand and the United States are popular among overseas destinations, according to a recent report by Qunar, a domestic rival that was acquired by Ctrip, the largest online travel agency in China, in 2016.

The agency surveyed those who were born between 1995 and 2005, and found that making trips and taking stylish photos are now standard practice to mark graduation. It is reported that the market scale of graduation tours has exceeded 15 billion yuan ($2.34 billion).

"Young people are good at using travel apps to get more information and their decision-making is quite fast. It's possible that just because of a song, a book, a TV drama, or a chat with someone, they may decide to take a trip somewhere," said Shao Jihong, senior director of the flight tickets department of Ctrip.

Compared with those who were born in the 1980s, and usually like to plan ahead carefully, the younger generations are deemed more free and casual. According to Qunar's statistics, 56 percent of customers who were born after 1995 book accommodation on the day they need to stay there.

Besides, 1.12 percent of students buy plane tickets after they arrive at an airport. They have also become less price sensitive, and look for higher quality trips. Most trips involve groups of two to five people, according to Qunar.

Last year, students who had just finished their college entrance examinations favored Shanghai, with many visiting the city's Disneyland. Kunming, Yunnan province, and Beijing are also popular, the report said.

Taking an in-depth trip to one destination is the preference of the young, and those born after 1995 have abandoned group tours with travel agencies. Most of them would prefer to stay at the same hotel for three to seven days, and the number of those who stay in one place for five days consecutively rose by about 30 percent year-on-year.

Meanwhile, themed tours such as trips to deserts, cruises, camping, those involving cosplay or getting married, are all hot elements that the young would like to try.

On average, students plan to spend between 3,500 yuan and 7,000 yuan on their graduation tours per person, and the money comes from savings, income from selling secondhand items, part-time jobs, and support from parents, according to the report.