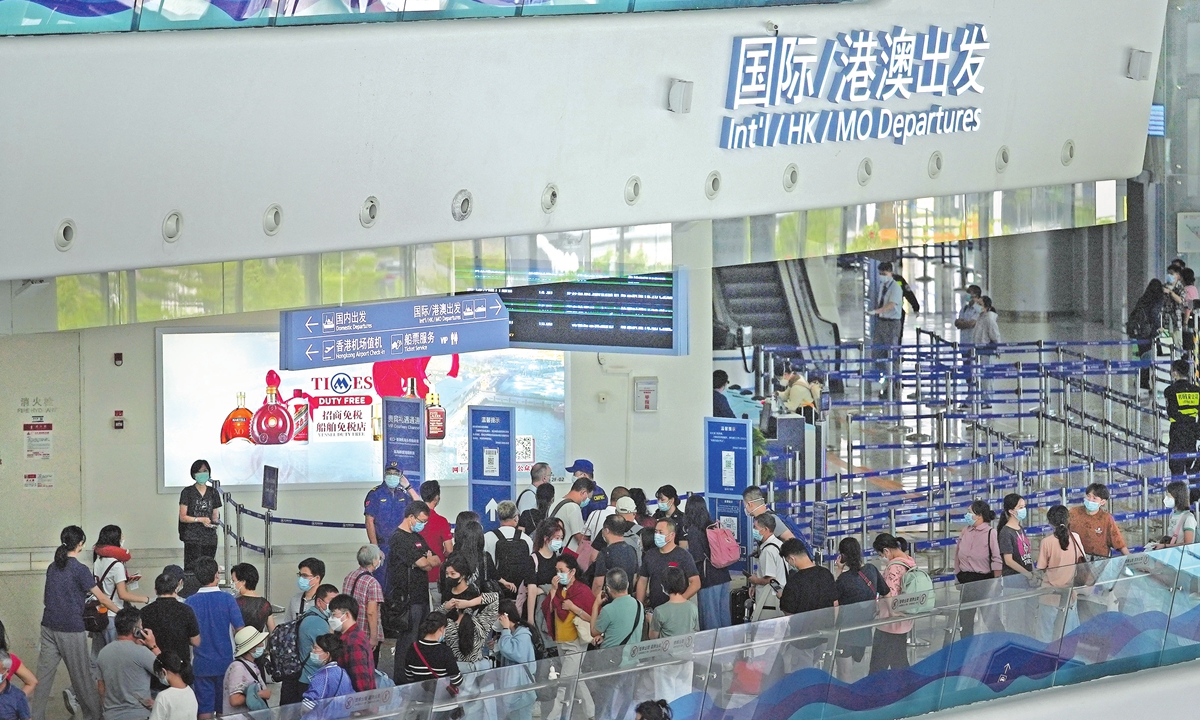 Students and travelers check in at the Shekou Cruise Home Port in Shenzhen, South China's Guangdong Province, and depart to Hong Kong International Airport by ferry on September 22, 2022. Photo: IC

Against the backdrop of the protracted impact of COVID-19 and geopolitical uncertainties including growing China-US tensions, the Hong Kong Special Administrative Region (SAR) has once again become a hot destination for mainland students pursuing further studies, with platform data showing that the consulting volume for studying in Hong Kong soared 41.5 percent year-on-year in the first seven months of 2022.

Industry insiders and education experts said that this is mainly driven by Hong Kong's improved social stability after the National Security Law for Hong Kong took effect, further integration with the Chinese mainland and its long-standing advantage as an international financial center, especially that the Guangdong-Hong Kong-Macao Greater Bay Area brings new opportunities for people from all walks of life in the region.

Between January and July, the consulting volume for studying in Hong Kong grew by 41.5 percent on a yearly basis, according to a report by EIC Education, a Beijing-based educational consulting agency. It said the amount of enquires had risen by 120.2 percent year-on-year in February after mainland postgraduate admission closed.

Liang Zeyue, co-founder of Qingruiedu, an education application agency in Beijing told the Global Times on Tuesday that Hong Kong had become a hot destination for overseas study among students from the Chinese mainland since the pandemic. "Distance and attitude of local communities to Chinese students have become two vital factors that may affect university applicants," Liang said, noting that the leading rank of universities in Hong Kong is another point of attraction.

She said there are about one million Chinese students applying for overseas universities to improve their education credentials each year. "Due to the better quarantine control and similar culture environment, many students have shifted to Hong Kong and Singapore from North America and Europe," she said.

Due to the high application volume, universities in Hong Kong are raising the benchmark for granting offers and tuition rates.

According to the official website of University of Hong Kong (HKU), the tuition fee for its Business School has soared to a maximum of HK$460,000 ($58,599.49) for the one-year master degree program in 2023 fall semester from HK$420,000 in 2022, "Confronting the large application volume, the HKU will only consider the most competitive applications from Chinese students graduating from universities listed in the Double First-Class initiative," Liang said. 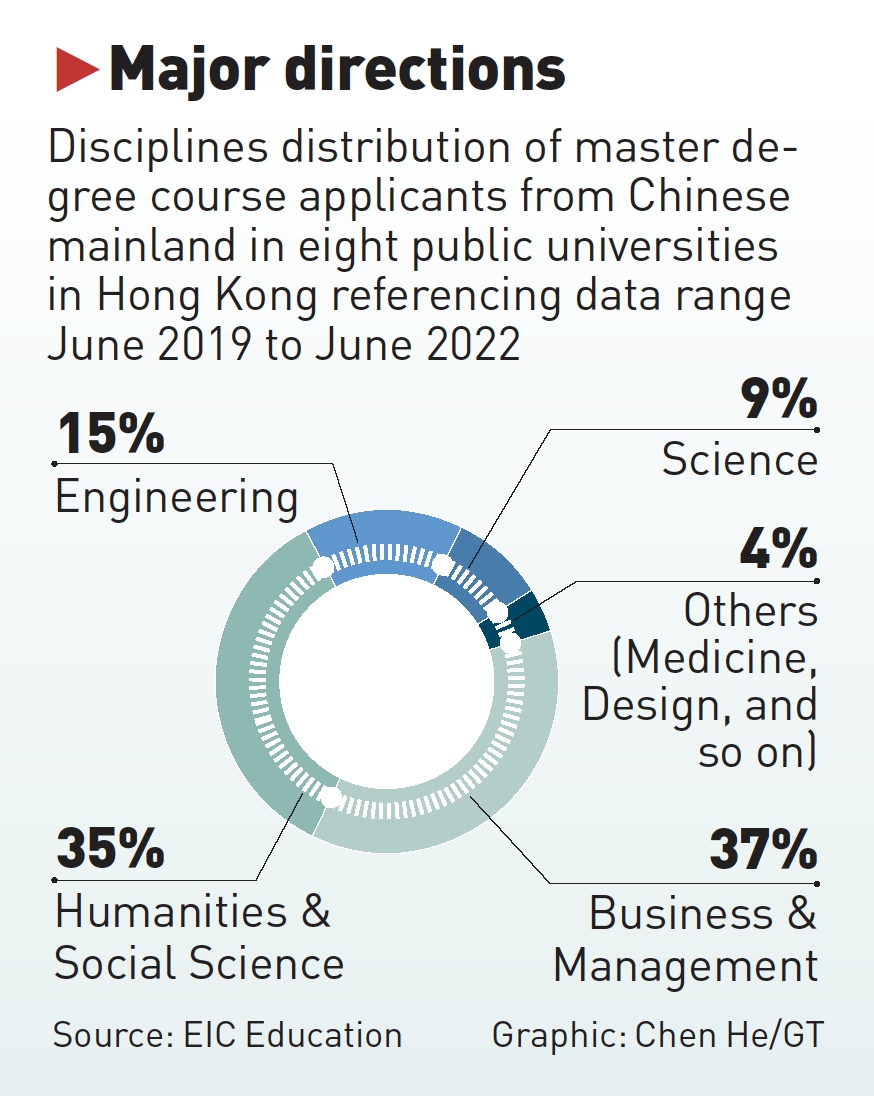 The inflow of university students to Hong Kong directly affects rental stock. Shiyun, a student from the Chinese mainland who is now studying at HKU, told the Global Times on Tuesday that good quality student accommodation was often rented out within seconds of being made available.

"I learnt from a local house agent that the rent fee for a three-bedroom house which can be shared by three tenants, has been lifted to HK$21,000 per month now from HK$19,000 per month days ago," she said.

Shrugging off concerns over attracting mainland students after the social unrest in 2019, Hong Kong has regained its reputation as peaceful after stability was restored, thanks to the implementation of the National Security Law for Hong Kong.

"On the one hand, Hong Kong's further integration with the Pearl River Delta region is attracting more mainland students from eastern and southern China. While on the other hand, the protracted global pandemic and geopolitical issues make mainland students who initially planned to pursue further studies in countries like the US switch to neighboring regions like Hong Kong," Chu Chaohui, a research fellow at China's National Institute of Education Sciences, told the Global Times on Tuesday.

Thanks to abundant financial resources as a southern gateway to the mainland as well as its flexible financial system, Hong Kong's status as an international hub for financial services, trade and shipping has made the city one of the hottest destinations for mainland students majoring in finance.

In addition, the HKSAR relaxed COVID-19 quarantine measures on Monday, meaning no mandatory hotel quarantine but only a 3-day self-monitoring period at home is needed for arrivals, which is expected to further raise the city's attractiveness for overseas higher education.

Looking ahead, Chu is taking a wait-and-see attitude for whether the trend for mainland students pursuing degree programs in Hong Kong would sustain in the wake of the COVID-19. "As the need for international education has been further segmented, Hong Kong should leverage its strength in higher education to roll out a variety of services to meet the needs of different groups of people," he said.

According to a statement on the SAR government's website, there is still room for post-secondary institutions in the city to admit more non-local students, including mainland students, saying the government will continue to review demand.