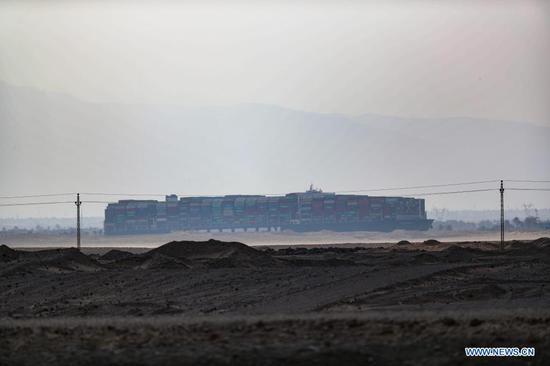 Photo taken on March 25, 2021 shows the grounded container ship Ever Given on the Suez Canal, Egypt. Egypt's Suez Canal Authority (SCA) said on Thursday that it has temporarily suspended navigation through the world's busiest shipping course until the grounded cargo ship is completely freed. (Photo: Xinhua)

Egypt's Suez Canal Authority (SCA) said on Thursday that it has temporarily suspended navigation through the world's busiest shipping course until the grounded cargo ship is completely freed.

As the rescue work continues, there are 13 ships which set sail on Wednesday from Port Said and has dropped anchor in the waiting area for the container ship Ever Given to be completely released, the SCA said in a statement.

Nine tug boats, with a towing power of 160 tons, and two dredges are continuing to free the 400-meter-long and 59-meter-wide vessel, the statement added.

Dozens of cargo vessels carrying vital goods remain stranded at both ends of the canal.

The Ever Given, coming from China to Rotterdam, ran aground on Tuesday morning in the new channel of the canal, which was operated in 2015, amid a strong sandstorm and 40-knot winds.

The SCA has reopened the old channel for traffic on Wednesday to ease the traffic, while the 224,000-ton vessel remained wedged across the waterway blocking transit in both directions through the key shipping channel, said Saleh Hegazy, a maritime expert.

The vessel is one of the world's largest container ship, which has prolonged the time of freeing it, Hegazy told Xinhua.

He expected that the ship could be freed in two days if the dredges succeeded in removing the sand and dirt from the grounded bow of it.

The revenues of the canal are would not be impacted largely because the world trade movement is slow because of the repercussions of the COVID-19, the expert noted.

About 30 percent of the world's shipping container volume transits through the 193-km Suez Canal on a daily basis, according to the official statistics.

Osama Rabie, chairman of the SCA, told independent extra news TV on Thursday that the Suez Canal, through which 18,000 ships pass annually, sees such accidents once or twice per year.

The canal will work around the clock once the salvage and refloating operations, in order to compensate for the waiting time of the ships, Rabie said.

But the exact time to release the giant ship is not known, he added.

The Suez Canal is the main source of foreign currency for Egypt, bringing in 5.6 billion U.S. dollars in revenues in 2020.

Egypt will lose a daily average of 15 million dollars in the canal's income, he noted.