Sustainable development to shine in China 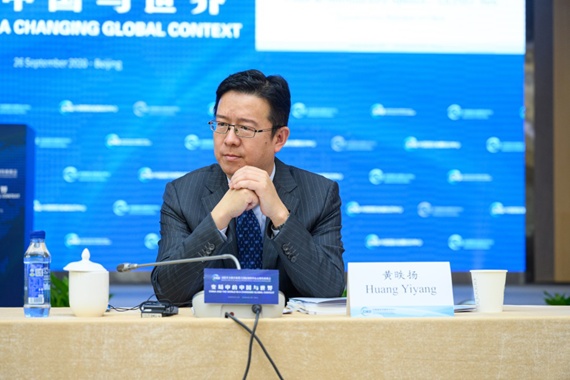 Huang Yiyang, deputy director-general of the Ministry of Foreign Affairs' Department of International Economic Affairs, attends a symposium hosted by the Center for International Knowledge on Development, titled "China and the World in a Changing Global Context", in Beijing on Sept 26. (Photos provided to chinadaily.com.cn)

China remains committed to the Sustainable Development Goals despite challenges brought by the COVID-19 global pandemic, a senior official said.

The country has been actively implementing the 2030 Agenda for Sustainable Development at home and promoting international development cooperation for the achievement of the SDGs in the past five years, aligning the 13th Five-Year Plan (2016-20) with the 2030 Agenda, said Huang Yiyang, deputy director-general of the Ministry of Foreign Affairs' Department of International Economic Affairs.

"I would assume the country's upcoming 14th Five-Year Plan (2021-25) would also feature a focus on achieving sustainable development and be highly consistent with the 2030 Agenda," Huang said.

Adopted by all UN member states in 2015, the 2030 Agenda is a collection of 17 goals intended to be achieved by 2030, such as no poverty, zero hunger and clean energy.

In face of rising protectionism amid the pandemic that has made achieving common and sustainable development more difficult, China will step up efforts to contribute to the 2030 Agenda, giving detailed roadmaps for fulfilling related national targets and coordinating domestic development with global goals, Huang said.

Huang stressed China's firm support for multilateralism and the UN as the core of the international system. He said China will match its words with actions to implement the important steps announced by President Xi Jinping at the UN several days ago to support the UN in playing its central role in international affairs and the implementation of the 2030 Agenda.

"President Xi Jinping also made an announcement at the general debate of the 75th session of the UN General Assembly that China aims to have a CO2 emissions peak before 2030 and achieve carbon neutrality before 2060," he said. "We will work hard to deliver on that with concrete actions, as always. We will break down the goals regarding energy conservation and carbon emission reduction into smaller sub-areas, and at the same time stay open and transparent."

Huang made the remarks on Sept 26 at a symposium on the fifth anniversary of the nation's announcement of establishing the Center for International Knowledge on Development, titled "China and the World in a Changing Global Context". 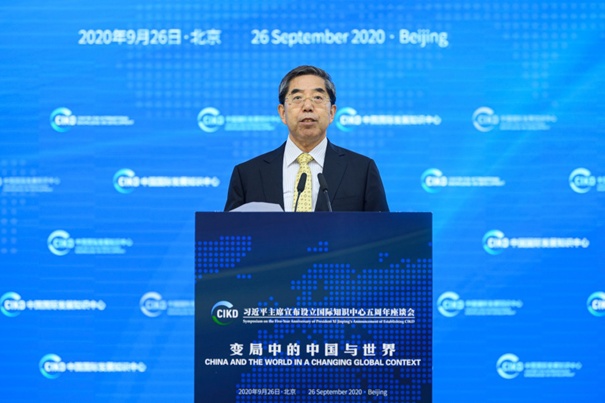 Ma Jiantang, president of the Center for International Knowledge on Development, addressed the symposium in Beijing on Sept 26.

Founded under instructions from the country's top leadership in 2017, the CIKD aims to research and communicate with other countries on development theories and practice, especially in terms of summarizing and sharing China's development knowledge, as well as promoting international development cooperation and global sustainable development, said Ma Jiantang, president of the CIKD.

To perform these roles, the CIKD has rolled out various reports about China's development experience in such areas as in reducing poverty and combating the COVID-19 outbreak, and organized a sustainable development forum to explore actions of relevant parties in implementing the 2030 Agenda, among other key moves, Ma said.

"The goal is neither to import development patterns of foreign countries nor to export China's mode, but to share development knowledge via two-way exchanges and provide developing economies with multiple choices and references," Ma said at the symposium.

Ma added the center will strengthen cooperation with international partners to share China's development experience. It has also started to compile its third report of assessing China's progress in implementing the 2030 Agenda, to be released next year.