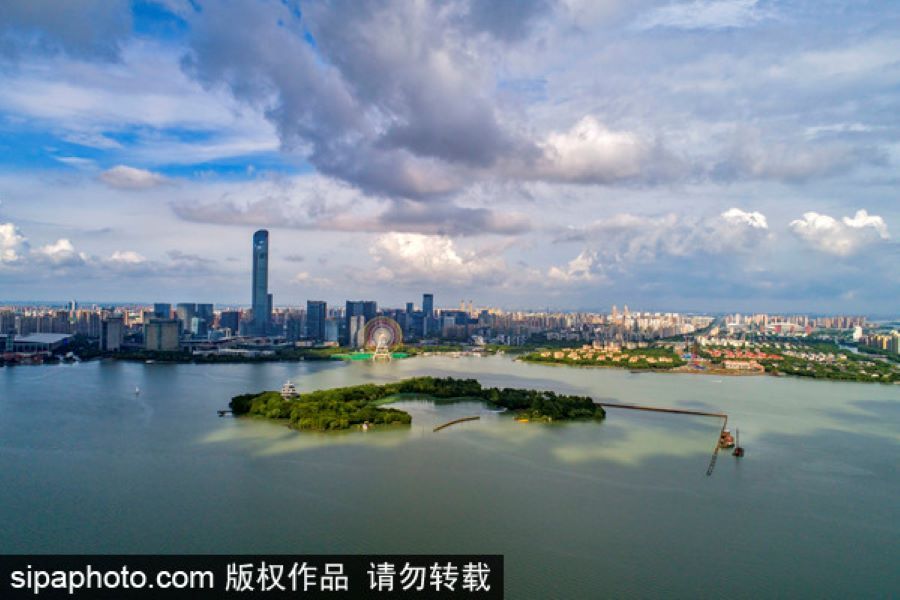 The financial center and other office buildings on the banks of Jinji Lake, on Sept 6, 2019, Suzhou, Jiangsu province. [Photo/Sipa]

NANJING -- As the global economy still wrestles with COVID-19, Suzhou, an economic heartland in east China's Jiangsu Province, reported a record-high $4.23 billion in foreign investments in the first quarter, up 163.3 percent year on year.

According to the municipal bureau of commerce, industrial investment in Suzhou during the three-month period rose by 13.3 percent year on year, among which the investment in emerging industries went up by 23.1 percent over the first quarter of last year.

The fiscal revenue of Suzhou continued to top the province, with its number of new market entities growing by more than 20 percent year on year.

Statistics showed that nearly 90 percent of the new foreign-invested projects in Suzhou came in at over $30 million.

Global coffee chain Starbucks in March announced a plan to invest $300 million in a coffee innovation park in Suzhou, which will be its largest productive investment outside the United States. With an initial investment of $130 million, the project is expected to go operational in the summer of 2022.

The city also saw settlements of regional headquarters of multinationals.

Japanese office furniture manufacturer ITOKI announced February in a video it would establish its China headquarters in Suzhou Xiangcheng economic and technology development zone, while Interroll Group, a Swiss provider of material handling solutions, declared that it will set up a new Asia-Pacific regional headquarters as well as a production and R&D base in the city.

Home to some 17,000 enterprises from 115 countries and regions, Suzhou saw its actual use of foreign investment reach $132.4 billion by the end of last year, next only to Shanghai and Beijing.

"Further opening up is the key to attracting foreign investment in this crucial phase," said Lan Shaomin, Party secretary of the city, noting that opening up is in the genes of Suzhou.

Suzhou unveiled a multilingual infographic guide for global investors in early January at the Conference on Further Opening-up, introducing the improved business environment and investment policies of the city.

It also maps out 230 development platforms and premises with a total area of 6.55 million square meters to accommodate new investments.

The city will further cut red tape, aiming at shortening the approval of new businesses to two days and the registration of real estate to three days.

Suzhou will never waver in its commitment to provide a fair business environment and preferential policies for foreign companies, said Lan, noting that the city will seek further opening up despite uncertainties in the latter half of the year.