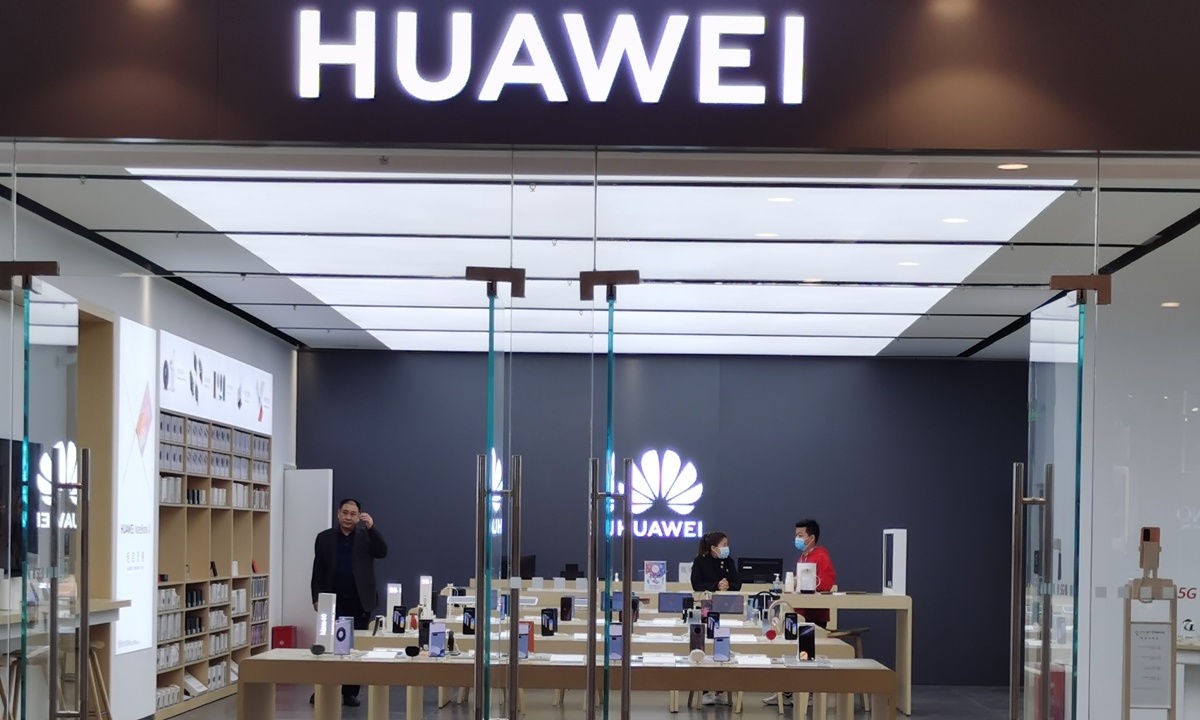 A view of a Huawei store in Central China's Henan Province in November 2020 (Photo: cnsphoto)

Swedish court has on Tuesday decided to uphold a ban on Huawei selling 5G network equipment in the country; the move, a purely politicized decision without any facts and evidence base, will not only delay global 5G progress as Huawei is a major contributor, but may also put the fate of Ericsson in danger, analysts said.

The remarks come as a Swedish court on Tuesday upheld a 5G sales ban against the Chinese telecommunications firm, giving the Swedish Post and Telecom Authority the right to shut the Chinese firm out from the country's 5G networks.

While reason for the ruling, is still the vague, citing possible "national security "risks.

The court's chairman Ulrika Melin said Sweden's security is a "weighty reason" and the administrative court has taken into account that only the Security Police and the Armed Forces together have an overall picture regarding the security situation and the threat against Sweden.

The Swedish telecom authority failed to produce any facts or evidence to demonstrate that Huawei's equipment has technical security issues, and the latest court ruling in the country against the Chinese company's 5G equipment is disappointing but the firm will continue pursuing its legitimate rights on the issue, Huawei told the Global Times on Wednesday.

The firm says it is currently reviewing the judgment and the court's reasoning to determine what further legal remedies to pursue to protect the company's legitimate rights and interests, and "our door remains open to constructive dialogues with relevant parties to work out practical solutions to mitigate any security concern," a Huawei spokesperson added.

Sweden itself is not a big market for Huawei, but it's critical for the firm to continue to appeal to the court for further decision to prove its "clean," Xiang Ligang, director-general of the Beijing-based Information Consumption Alliance, told the Global Times on Wednesday.

Xiang added that the ban is also a mixed result of US pressure, as well as the rivalry between various political forces in Sweden, and Sweden industry community surely doesn't want to see the result.

Cui Hongjian, director of the Department of European Studies at the China Institute of International Studies, told the Global Times on Wednesday that the lack of solid evidence for banning a single Chinese firm may also put Swedish firms such as Ericsson at risk.

"If Sweden can ban Huawei citing the vague national security grounds, China can do the same on Swedish firms," Cui said.

The Global Times exclusively learned from a source close to the matter on May 10 that Chinese mobile operators invited Swedish firm Ericsson to participate in their 5G equipment testing, offering the Swedish firm an opportunity for "interview" for access China's 5G market, which could be the last chance for Sweden to pull back its incorrect decision of excluding Chinese firms such as Huawei from participating in its 5G construction.

Chinese Ambassador to Sweden told Swedish media in mid-May that the ban on Huawei was not based on facts and had no legal support, but was a politicized decision that China resolutely objects to, urging the Swedish authorities to correct their mistake.

The Huawei decision is influenced by political considerations, while rising cost and a delayed 5G progress will be the result for countries who decided to ban Huawei, Xiang said.

"These countries will taste the 'bitter fruit' later when large scale 5G deployment began, and thus may turn back to Huawei and regretting the decision they made today," said Xiang.