The National Enquirer committed neither extortion nor blackmail by threatening to publish intimate photos of Amazon CEO Jeff Bezos, an attorney for the head of the tabloid's parent company said Sunday. 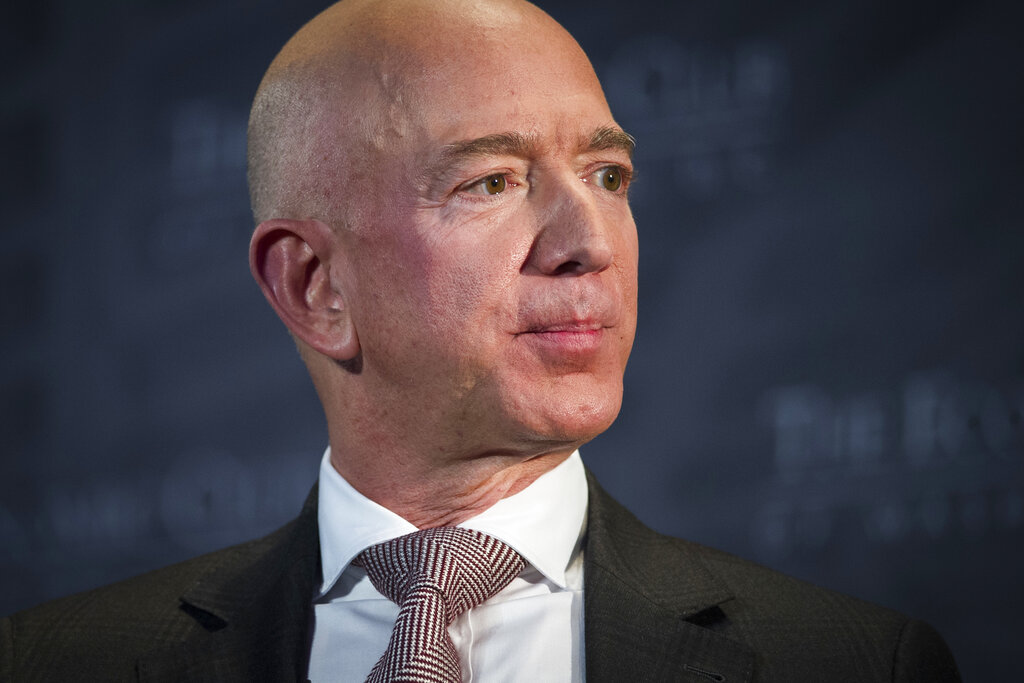 In this Sept. 13, 2018, file photo Jeff Bezos, Amazon founder and CEO, speaks at The Economic Club of Washington's Milestone Celebration in Washington. (AP)

Elkan Abromowitz, an attorney for American Media Inc. chief executive David Pecker, said on Sunday a "reliable source" well-known to Bezos and his mistress provided the story about the billionaire's extramarital affair.

Bezos has said AMI threatened to publish the explicit photos of him unless he stopped investigating how the Enquirer obtained his private exchanges with his mistress, former TV anchor Lauren Sanchez, and publicly declare that the Enquirer's coverage of him was not politically motivated. Bezos also owns The Washington Post.

Bezos' investigators have suggested the Enquirer's coverage of his affair was driven by dirty politics, and the high-profile clash has pitted the world's richest man against the leader of America's best-known tabloid, who is a strong backer of President Donald Trump. Trump has been highly critical of Bezos over his ownership of The Washington Post and Amazon, and the Post's coverage of the White House.

Federal prosecutors are looking into whether the Enquirer violated a cooperation and nonprosecution agreement that recently spared the gossip sheet from charges for paying hush money to a Playboy model who claimed she had an affair with Trump, two people familiar with the matter told The Associated Press on Friday. The people weren't authorized to discuss the matter and spoke on condition of anonymity.

But asked during an interview with ABC's "This Week" whether he was concerned the Bezos matter could jeopardize the noncooperation agreement, Abramowitz said: "Absolutely not."

Abramowitz defended the tabloid's handling of the situation as part of a standard legal negotiation.

"I think both Bezos and AMI had interests in resolving their interests," Abramowitz said. "It's absolutely not a crime to ask somebody to simply tell the truth. Tell the truth that this was not politically motivated, and we will print no more stories."

Bezos' affair became public when the Enquirer published story on Jan. 9 about his relationship with Lauren Sanchez, who is also married. Bezos then hired a team of private investigators to find out how the tabloid got the texts and photos the two exchanged.

Bezos' personal investigators, led by his security consultant Gavin de Becker, have focused on Sanchez's brother, according to a person familiar with the matter. The person wasn't authorized to discuss the matter publicly and spoke on condition of anonymity. Michael Sanchez is his sister's manager, a Trump supporter and an acquaintance of Trump allies Roger Stone and Carter Page.

Abramowitz would not comment when asked whether Michael Sanchez was the Enquirer's source but said that "Bezos and Ms. Sanchez knew who the source was."

Michael Sanchez has declined to speak with AP on the record. In a Jan. 31 tweet, he said without evidence that de Becker "spreads fake, unhinged conservative conspiracy theories."

Investigators working for Bezos have identified who they believe provided text messages to the Enquirer, the person familiar with the matter told the AP on Sunday. Bezos' investigators concluded their probe into the text message leak and turned over the results to attorney Richard Ben-Veniste for review and possible referral to law enforcement, the person said. Ben-Veniste had served as special prosecutor during the Watergate scandal.

In his blog post on Thursday, Bezos alluded to a possible relationship between Saudi Arabia and AMI, but Adel al-Jubeir, Saudi Arabia's minister of state of foreign affairs, said he had "no idea" about such a relationship and doubted the kingdom played any role in urging AMI to run negative stories about Bezos. Last year, the tabloid produced a glossy magazine that included 97 pages saluting Saudi Arabia, ahead of Crown Prince Mohammed bin Salman's arrival in the US on a public relations blitz to transform his country's image.

"It's like a soap opera," al-Jubeir said of Bezos' allegations during a roundtable on Friday with reporters in Washington.

Asked about AMI's recent $450 million debt restructuring, Abramowitz said "not a penny" of that money came from the Saudi kingdom. The company had sought financing from the Saudis but never received any, he said.

After Bezos on Thursday posted the exchanges with AMI in an extraordinary blog post on Medium.com, several celebrities and journalists posted on social media that they too had been threatened by AMI. Ronan Farrow said he and "and at least one other prominent journalist" involved in reporting on the tabloid had "fielded similar 'stop digging or we'll ruin you' blackmail efforts from AMI" and actor Terry Crews alleged the company tried to "silence him" by "fabricating stories of me with prostitutes."

Abramowitz said he didn't know of any AMI employees blackmailing celebrities or journalists or "committing any crime at all."

In recent months, the Trump-friendly tabloid acknowledged secretly assisting Trump's White House campaign by paying $150,000 to Playboy centerfold Karen McDougal for the rights to her story about an alleged affair with Trump. The company then buried the story until after the 2016 election.

As part of a nonprosecution agreement in that case, AMI promised not to break the law. The deal requires top executives, including Pecker and the Enquirer's editor, Dylan Howard, to cooperate with federal prosecutors. A violation of the agreement could lead to criminal charges over the McDougal payments.