BUSINESS Target, like other retailers, did not have a Merry Christmas

Target, like other retailers, did not have a Merry Christmas 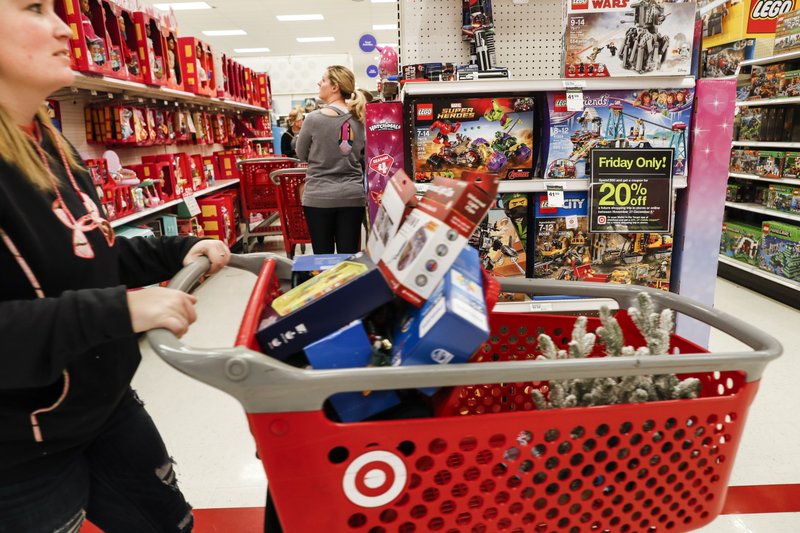 In this Nov. 23, 2018, file photo shoppers browse the aisles during a Black Friday sale at a Target store in Newport, Ky. (Photo: AP)

Target reported a rare shortfall in holiday sales, raising concerns about the challenges ahead for the traditional retail industry even as the economy remains strong.

Target’s disappointing growth of 1.4% percent for November and December, dragged down by toys and electronics, fell well below the previous year. Target joined a growing list of retailers reporting meager performances during the critical holiday shopping season.

Target cut its expectations for same-store sales growth for the entire quarter Wednesday. Shares fell more than 7% in afternoon trading, making it the biggest decliner in the benchmark S&P 500.

The latest evidence of weak numbers from a major retailer cast a pall over the entire sector, with investors leery of any hints that the consumer, a major driver of the US economy, is getting nervous. The retail sector declined while overall markets were up..

The report of weak toys and electronics sales also hit other companies like Hasbro and Best Buy.

However, analysts say the consumer remains financially strong, and some blamed increasing competition from not only Amazon but a slew of online competitors from mattress maker Casper to home goods purveyor Wayfair. Many believe that they are all starting to create material headwinds for traditional retailers.

“We are seeing a healthy consumer that is choosing different ways to spend the same amount of money,” said Joel Bines, managing director at consulting firm AlixPartners. “The consumer today is presented with an array of options for virtually every product you can think of from footwear to apparel to toys and games to electronics.”

Bines added that many of these online retailers are held to different standards for profitability compared to traditional large companies.

“Consumers can sign up for all these subscription services from pies to clothing,” he said. “That’s definitely siphoning off sales from traditional retailers.”

Target experienced weaker-than-expected sales of electronics, toys and home goods. Comparable sales of 1.4% in the November-December period contrasted with a very strong 5.7% increase a year earlier. Target’s toy sales were flat, while consumer electronics business fell more than 6%. Home goods sales were down more than 1%.

Jim Silver, editor-in-chief of TTPM.com, a toy review site, believes Amazon picked up market share in toys this past holiday season, based on his talks with toy manufacturers. He also noted that the demise of Toys R Us in 2018 has hurt impulse buying.

Target Corp., based in Minneapolis, said it now foresees fourth-quarter comparable-sales growth in line with the 1.4% increase it experienced during the holiday period. It had previously forecast a rise of between 3% and 4%.

Target and other discounters like Walmart have been among the strongest performers in retail even as Amazon continues to make inroads. They have reconfigured product lineups and improved delivery services with some success.

Other department stores, namely those in malls, have not had the same success. J.C. Penney, Kohl’s and L Brands, the parent company of Victoria’s Secret, all reported holiday sales declines. Macy’s reported a small decline in holiday sales, though it was better than what investors had expected.

The National Retail Federation, the nation’s largest retail trade group, forecasts that holiday sales will rise between 3.8% and 4.2% for November and December. The holiday sales forecast marks an increase from the disappointing 2.1% for the 2018 period. But it’s above the average holiday sales growth of 3.7% over the previous five years. The group is expected to release final holiday results Thursday following the government’s release of December retail sales.

Retailers post fiscal fourth-quarter results next month and that will certainly provide more insight into the mood of U.S. consumers through January.

Neil Saunders, managing director of research firm GlobalData Retail, said Target’s holiday performance wasn’t dire, as it was going to be tough for the chain to top its strong year-ago results. He also believes that the disappointing electronics and home sales were impacted by the timing of Black Friday, coming later this year.

“Overall, Target remains a good retailer on the right trajectory,”′ Saunders wrote. “It may have stumbled and slowed over the holidays, but it is still one of the most attractive runners in the retail race,.

That was largely the sentiment among industry analysts.

Seth Sigman of Credit Suisse agreed, saying that “there are many bright spots within that would point to this being more of a blip rather than the start of a new trend.”