BUSINESS Tariffs could be next on agenda after China, US hold first Biden-era call over trade

Tariffs could be next on agenda after China, US hold first Biden-era call over trade 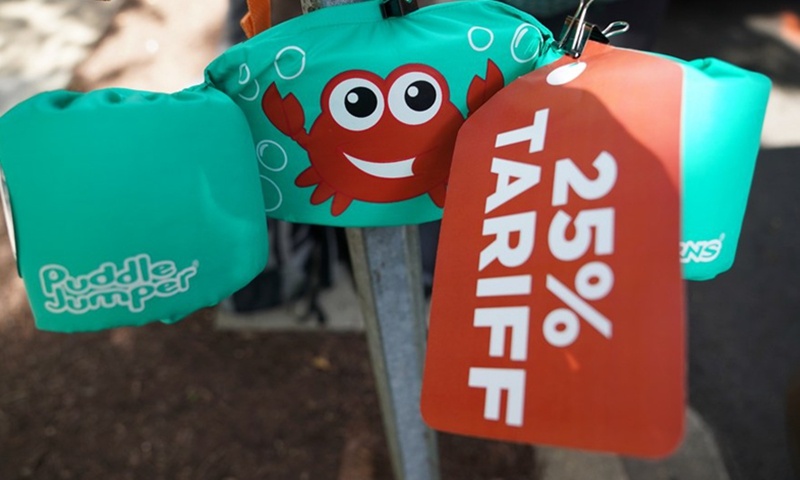 Anti-tariff posters are seen on a life vest outside the building of U.S. International Trade Commission in Washington D.C., the United States, June 17, 2019. (Photo: Xinhua)

Chinese and US senior trade officials on Thursday held what both sides described as "candid" discussions in their first phone call since US President Joe Biden took office, sending a positive signal that the world's two biggest economies are restarting communication amid growing uncertainties and lingering disputes over a wide range of issues.

The statements after the call also indicate that China and the US have agreed that trade is the ballast of the bilateral relationship, while also paving the way for deeper trade communications within and beyond the phase-one trade deal, analysts said.

Chinese Vice Premier Liu He held a phone call with US Trade Representative Katherine Tai, during which the two conducted "candid, pragmatic and constructive exchanges with an attitude of equality and mutual respect," the Chinese Commerce Ministry said in a statement on Thursday.

"Both sides believe that the development of bilateral trade is very important, and exchanged views on each other's issues of concern and agreed to continue to maintain communication," read the statement.

The statement did not offer any details, but its characterization of the conversation suggests a positive vibe for the discussions, compared with the often tense atmosphere in some recent encounters between Chinese and US officials.

For its part, the office of the US Trade Representative described the exchange as "candid" in a statement and said that Tai also raised some issues of concern.

This was the first phone call between Chinese and US trade officials under the Biden administration. The conversation came after Tai suggested earlier that she would meet her Chinese counterpart in the near future, and as the Biden administration continues to step up pressure on China in a wide range of areas, including cracking down on Chinese tech companies and leaving in place punitive tariffs.

Although the two sides still have significant differences on many issues, this call could still be viewed as a positive sign that the two sides can at least exchange views on issues of common concern, analysts said.

Lifting tariffs will be key issue to be discussed in later trade talks between China and the US, and while the process might be tough, the two countries are likely to reach consensus at least on an incremental removal of tariffs, Gao Lingyun, an expert at the Chinese Academy of Social Sciences in Beijing who closely follows trade issues, told the Global Times on Thursday.

Despite mounting pressure on the Biden administration to remove the tariffs that are badly hurting US businesses and consumers, US officials have maintained the tariffs and Tai has described the tariffs as "leverage" for the US in negotiations with China.

Removing the tariffs is also in the interests of the US, Song Guoyou, deputy director of the Center for American Studies at Fudan University, told the Global Times on Thursday, while noting that challenges and uncertainties are still "huge" given the current volatile bilateral relationship.

There are also different opinions about the progress of the phase-one trade agreement, with some in the US claiming that China is falling behind on commitments to purchase US products.

China and the US should work together to advance the implementation of the deal, a spokesperson for China's Commerce Ministry Gao Feng told a regular press conference in Beijing on Thursday afternoon.

"China has been pushing to fulfill its part of the phase-one deal, including further opening up its market, and better intellectual property protection," Gao said. "It has also been increasing purchases of US products, but supply on the US side has been seriously hindered during the pandemic."

China has bought about 9.5 million metric tons of US corn from the 2021-22 season as of May 19, according to a Bloomberg report, citing data from US Department of Agriculture. The agency expects China to import around 26 million tons from worldwide suppliers for the period that begins in September.

A senior industry representative told the Global Times in April that the US soybean sector is expecting record exports of about 36 million metric tons to China in the 2020/21 marketing year, as the China-US phase-one trade deal remains in force.

China and the US might have negotiations on specific categories when it comes to lifting tariffs and will set a specific agenda on fulfilling the phase-one deal in the second half of the year, as the epidemic situation is expected to improve in the US, Gao Linyun, the expert said.

The key point for further discussion is that China has to "hold on," and future talks cannot be dominated by the US and conducted based on "US standards," He Weiwen, a former senior Chinese trade official, told the Global Times on Thursday.

"It has to be equal and under a multilateral base," He said.

Chinese officials have also repeatedly stressed that the two sides should properly solve trade disputes but talks should be based on mutual respect and equality. They have also called on the US to stop cracking down on Chinese firms and remove tariffs.