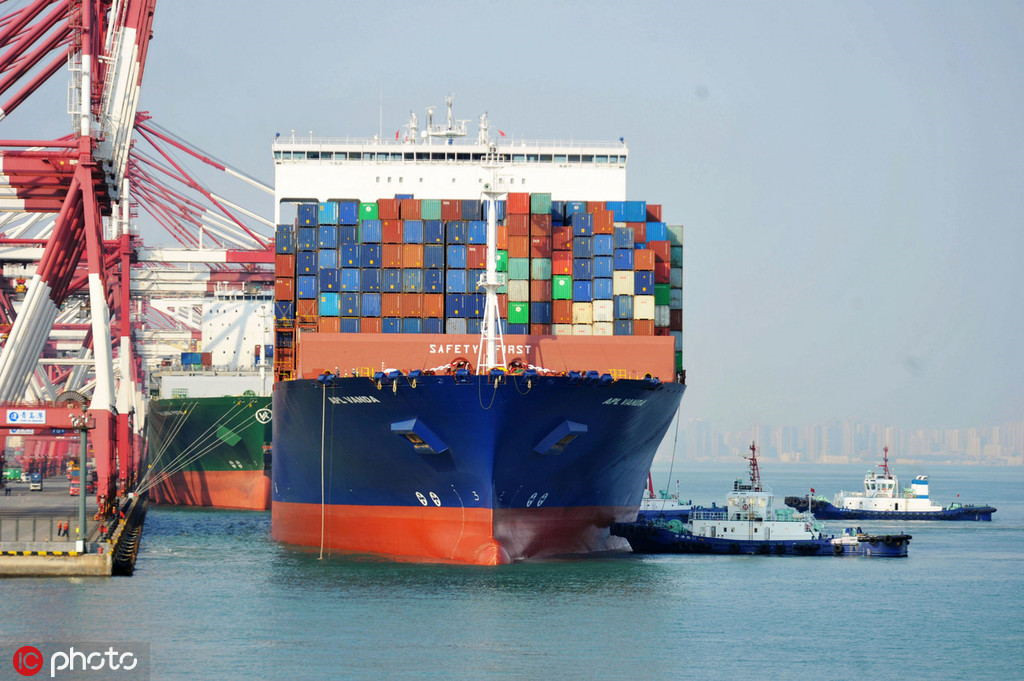 A US container ship is docked at a port in Qingdao, East China's Shandong province, on April 1, 2019. (Photo: IC)

A total of 661 US companies and associations have signed a letter to President Donald Trump, urging his administration to abandon tariff hikes and reach a deal with China, a US nationwide anti-tariff campaign said on Thursday.

According to a news release issued by Tariffs Hurt the Heartland, a bipartisan campaign against levies, 520 companies and 141 associations said in the letter that they "remain concerned about the escalation of tit-for-tat tariffs" between the US and China.

"We know firsthand that the additional tariffs will have a significant, negative and long-term impact on American businesses, farmers, families and the US economy," read the letter. "Tariffs are taxes paid directly by US companies."

The letter came as the US Trade Representative Office plans to begin a public hearing on June 17 to solicit public comments on and responses to proposed tariff measures.

US President Donald Trump last month raised tariffs on Chinese imports valued at $200 billion to 25 percent from 10 percent and threatened to impose tariffs on another $300 billion worth of goods. China responded by imposing tariffs totaling $60 billion on US goods.

Tariffs Hurt the Heartland said that combined with the impact of previously implemented tariffs and retaliation, the new tariffs on another $300 billion worth of Chinese imports, if imposed, would result in the loss of more than 2 million US jobs, add more than $2,000 in costs for an average American family of four, and reduce the US GDP by 1 percent.

"We urge your administration to get back to the negotiating table," signatories of the letter told Trump. "An escalated trade war is not in the country's best interest, and both sides will lose."

The ongoing trade dispute with China could tip the US economy into a recession in less than a year, an analyst at investment bank Morgan Stanley believes.

"We could end up in a recession in three quarters," Chetan Ahya, the investment bank's chief economist, said in a research note.

The Duke University Global Business Outlook found that 48.1 percent of US chief financial officers expect the US will be in a recession by the middle of next year or by the end of 2020.

Manufacturing activity slowed in the US, Europe and Asia in May, as the trade dispute between Washington and Beijing continued.

A recession could come just as the US presidential election is heating up and could damage Trump's re-election prospects.

Gao Feng, spokesman for the Chinese Ministry of Commerce, said in Beijing that the continuing trade standoff "could cause a recession in the US and global economies".

Christine Lagarde, International Monetary Fund managing director, said the IMF does not now see the threat of a global recession sparked by trade dispute. Instead, she said growth will slow, but the world economy won't slide into a recession.

Usha Haley, the W. Frank Barton Distinguished Chair in International Business and a professor of management at Wichita State University who specializes in China, called talk of a recession sparked by the trade dispute "apocalyptic".

"There might be a recession simply because it's time," Haley told China Daily. "The current strong economy is about 10 years old, and historically, a boom is followed by a downturn. The trade dispute with China creates uncertainty, and that doesn't help because it disrupts long-range planning. The underlying principles of the US economy are OK, but need structural adjustment."

The current economic boom began in June 2009. While US economic fundamentals remain strong, growth is slowing. The economy added 75,000 jobs in May, for the 104th consecutive month of gains, but hiring dipped. Analysts expected companies to add 180,000 jobs last month, but employers hired only 41.6 percent of the anticipated total.