Tariffs to hit US importers, consumers 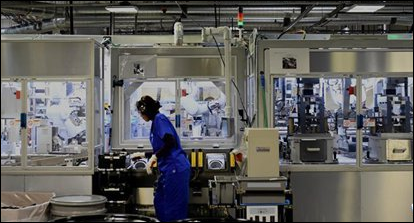 The new-generation recycling robot Daisy of Apple works in a workshop in Austin, Texas, the United States, April 15, 2019. (Photo: Xinhua)

Washington's threat of additional tariffs on consumer electronics products from China will only make its importers and consumers suffer from higher costs, and it will not be easy for the sector's supply chain to shift from China, analysts and entrepreneurs told the Global Times on Thursday.American consumers would pay over $8.1 billion more for cellphones and over $8.2 billion for laptops and tablets, which will be a substantial negative impact on American consumers, if the US government imposes tariffs of up to 25 percent on imports of approximately $300 billion in goods from China, said a report released on Monday by the US-based company Trade Partnership Worldwide.The report was prepared for the US Consumer Technology Association.A net $4.5 billion loss for the US economy in the cellphone sector would occur, while the number is $3.6 billion in terms of laptops and tablets, it noted.China accounts for about three quarters of total imports of cellphones, and over 90 percent of total imports of laptops and tablets for the US, according to the report."In the short term, US consumers have no choice but to suffer higher prices if they want to buy those electronic goods," said David Huang, marketing manager at JXV Micromotor Co, a camera supplier based in Baotou, North China's Inner Mongolia Autonomous Region."Major cellphone brands like Apple and Samsung in the US market are mainly reliant on original design or equipment manufacturing in China thanks to the country's cumulative supply-chain advantages," Huang told the Global Times on Thursday.It will be difficult and time-consuming if a large volume of supply is shifted to other countries, the report said.Although international smartphone brands have been expanding their manufacturing facilities in India and some Southeast Asian countries in recent years, they cannot compete with China's supply chain in terms of comprehensiveness and labor quality, said Huang.Samsung built a new mobile phone manufacturing plant on the outskirts of New Delhi, India last year, its biggest mobile phone plant in the world, media reports said.According to Huang, China's supply-chain advantage in electronic goods is still unshakable in the world, giving the country's companies the upper hand when bargaining with US clients."On that side, the US importers have no other choices but to digest higher costs and then transfer those to their consumers," he noted.According to a Bloomberg report on Thursday, US electric goods makers Dell Technologies Inc, HP Inc, Intel Corp and Microsoft Corp have submitted joint comments opposing the tariff escalation, saying it would hurt consumer products and the industry. The companies said they spent a collective $35 billion on research and development in 2018, and tariff costs would divert resources from innovation while providing "a windfall" to manufacturers based outside the US that are less dependent on American sales, the Bloomberg report noted.James Yan, Beijing-based research director at Counterpoint, told the Global Times on Thursday that compared with the shoe and garment industries that have largely transferred from China to other countries, consumer electric goods have higher requirements in terms of raw materials, design and labor quality, meaning a complex and complete supply chain is needed."Also, Southeast Asian countries tend to have weak delivery capability," Yan added.Wu, a production line manager at an electronic devices company based in Dongguan, a manufacturing hub in South China's Guangdong Province, told the Global Times that he moved two production lines back to Dongguan just two years after entering in Cambodia in 2016."The country's undeveloped port infrastructure, transport and logistics and most importantly, cultural differences matter. People there are not as industrious as Chinese workers," Wu said. "Besides, the supply chain in Cambodia, generally in all the Southeast Asian countries, is not complete. Sometimes you have to import parts from Dongguan and that further increases transportation costs," he added.