BUSINESS Tariffs will drive US wines out of Chinese market: analysts

Tariffs will drive US wines out of Chinese market: analysts

Australia, Chile will be beneficiaries of trade dispute: expert

China's proposed tariffs on US wine will further squeeze the limited US share in the growing Chinese market and might even block these wines entirely, said industry players and analysts. 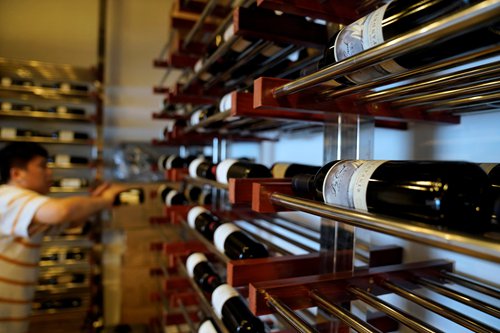 An employee puts bottles of red wines imported from the US on the shelf at a wine store in Shanghai on July 6. (Photo: VCG)

China has announced a proposed tariff rate of 25 percent on a list of US products including wines, and the combined total tariffs and taxes per bottle exceeds 90 percent. China has not set a specific date for the tariffs to take effect.

A wine lover in Beijing surnamed Guo said that when trying to buy some US wines on one of China's largest online shopping platform JD.com last week, he found the price had already increased a lot, from 40 yuan ($5.81) per bottle after discounts in April to more than 90 yuan now. Many of the wines are out of stock.

"Given the sharp increase, I would definitely avoid US wines. Chinese consumers like me are quite pragmatic. Although US wines offer good quality and taste, there are many other good options as well. Why would I stick to US wines?" Guo asked.

Chinese importers interviewed by the Global Times said that they have put orders on hold or even canceled orders for new shipments to avoid the possible risks of proposed tariffs and China-US trade tensions.

"We have already canceled two-thirds of the US wine we planned to import, and we will not consider importing in the short term given the escalating trade tensions and high tariffs," said a US wine importer surnamed Li, the CEO of Sen Hua Hui Trading Co in Guangzhou, South China's Guangdong Province.

Li said that he had been planning to start importing US whisky, but that has become impossible.

Another wine importer who only gave his surname as Qiu, based in East China's Fujian Province, said he may stop importing US wines due to soaring costs and shrinking profits.

Yang Zhengjian, the vice secretary of the wine committee of the China Liquor Association, said "it is possible that US wines will be completely kicked out of the Chinese market."

According to data from the Chinese General Administration of Customs, total import value of China's wine imports increased by 17.96 percent year-on-year in 2017, indicating a large potential market, which is luring for countries including the US.

"China is an important and growing market for California wines… These tariffs put our products at a price disadvantage and we urge swift resolution of this issue before long-term disruptions are felt," the US California Wine Institute said in a statement on its website.

The institute's affiliated businesses are responsible for 85 percent of the wine produced in the US and 97 percent of all US wine exports.

In 2017, US wines showed the strongest growth momentum in terms of value among all wine imports by China, with an impressive growth rate of 44 percent, customs data showed.

"It is unlucky that wines from the US are on the list, subject to high customs duty," an industry insider based in Hong Kong told the Global Times on Tuesday.

"California wines were expected to have growth of 15 to 30 percent in 2018 and 2019. However, thanks to the trade war ... that expectation is gone with the wind," the industry insider noted.

Yang noted that wines from Australia and Chile would gain market share instead. Given that Australian wines will be tariff-free entering China after 2019, their presence might increase at an even faster pace.

"We do not know when the trade war between China and the US will come to an end. However, US wines for sure will have a very hard time in the market during this dark period," the industry insider noted.