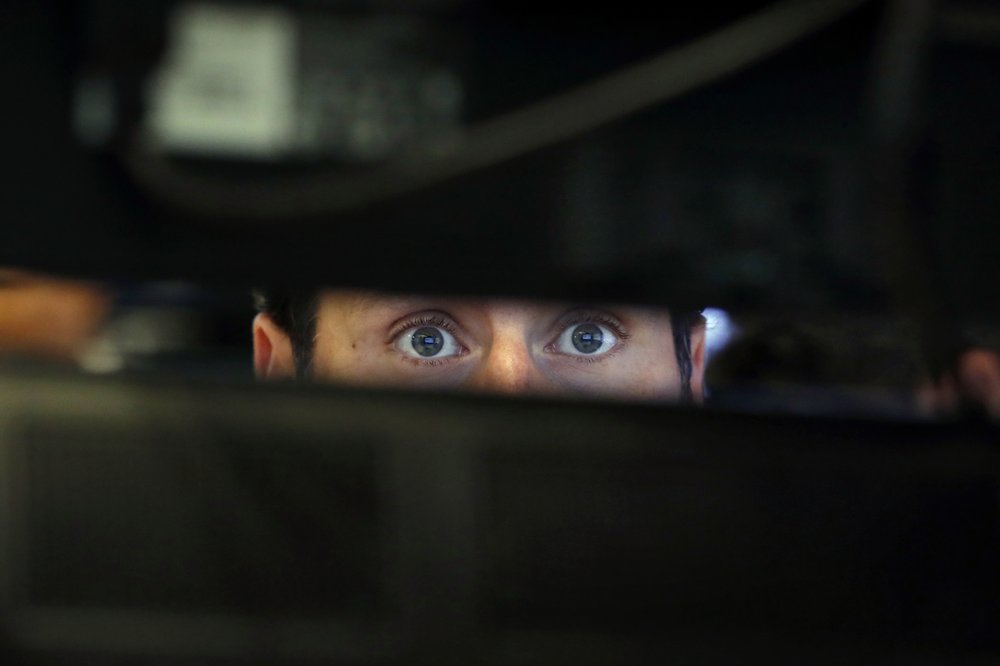 Specialist Michael Pistillo watches his screens at his post on the floor of the New York Stock Exchange on Wednesday, November 28, 2018. (Photo: AP)

US stock indexes are rising Wednesday morning as software maker Salesforce leads a rally in technology companies. Health care stocks are also higher. Luxury retailer Tiffany is dropping after it said tourists from China pulled back on spending in its latest quarter, which hurt its sales.

Federal Reserve Chairman Jerome Powell will give a speech later in the day and investors who are worried about slowing economic growth will look for hints the Fed might be willing to raise interest rates at a slower pace.

OUT IN FORCE: Customer-management software developer Salesforce climbed 4.7 percent to $133.50 after its earnings and revenue were stronger than analysts expected. That helped pull technology companies higher. Software maker Adobe rose 3.9 percent to $241.37 and cloud computing company Citrix Systems added 1.6 percent to $110.28. Microsoft rose 1.2 percent to $108.38 and Apple picked up 0.9 percent to $175.89.

FED SPEECH: Powell will address the Economic Club of New York on Wednesday. Recent remarks by Powell and other officials have made investors more hopeful that the Fed might raise interest rates at a slower pace next year. It’s been steadily raising those rates since the end of 2015 and is expected to announce another increase in December. But with economic growth in the U.S. and other regions likely to slow down next year, investors are concerned that rising interest rates will hinder the economy and the bull market.

HOME SALES SINK AGAIN: The Commerce Department said sales of new U.S. homes plummeted 8.9 percent in October and the number of newly built, unsold homes sitting on the market climbed to the highest level since 2009. Sales of new homes have dropped 12 percent over the last year as higher mortgage rates have caused would-be buyers to back away. Sales of already-built homes have also fallen this year.

The drop in home sales has made some investors nervous. They view home sales as an indicator of how much money people are willing to spend because a home is the biggest item most people will purchase.

JAMMED UP: Jam and packaged food maker J.M. Smucker fell 5.8 percent to $102.77 after it reported a smaller profit and less revenue than analysts had expected. Smucker also pared its forecasts for the full year. General Mills lost 2 percent to $41.61 and Kellogg lost 0.7 percent to $61.80.

STABILIZING? Boeing recovered a sliver of its recent losses as investigators in Indonesia discussed their probe into the crash of a Boeing 737 MAX 8. Indonesian authorities said they are still struggling to understand why the plane crashed, but added that faulty equipment and carrier Lion Air’s own safety failures had pilots fighting for control of the plane as it fell into the Java Sea on Oct. 28, killing all 189 people aboard.

The MAX is Boeing’s newest plane, and questions about the crash have pulled Boeing’s stock lower. The stock rose 2.1 percent to $324.68 Wednesday, but it’s still down 12 percent since Nov. 8, when federal regulators gave an emergency directive telling pilots how to handle incorrect data from a sensor that may have malfunctioned during the flight. Pilots for US airlines have said that they were not told about a new feature in the MAX that could pitch the nose down sharply if sensors indicate that the plane is about to stall.