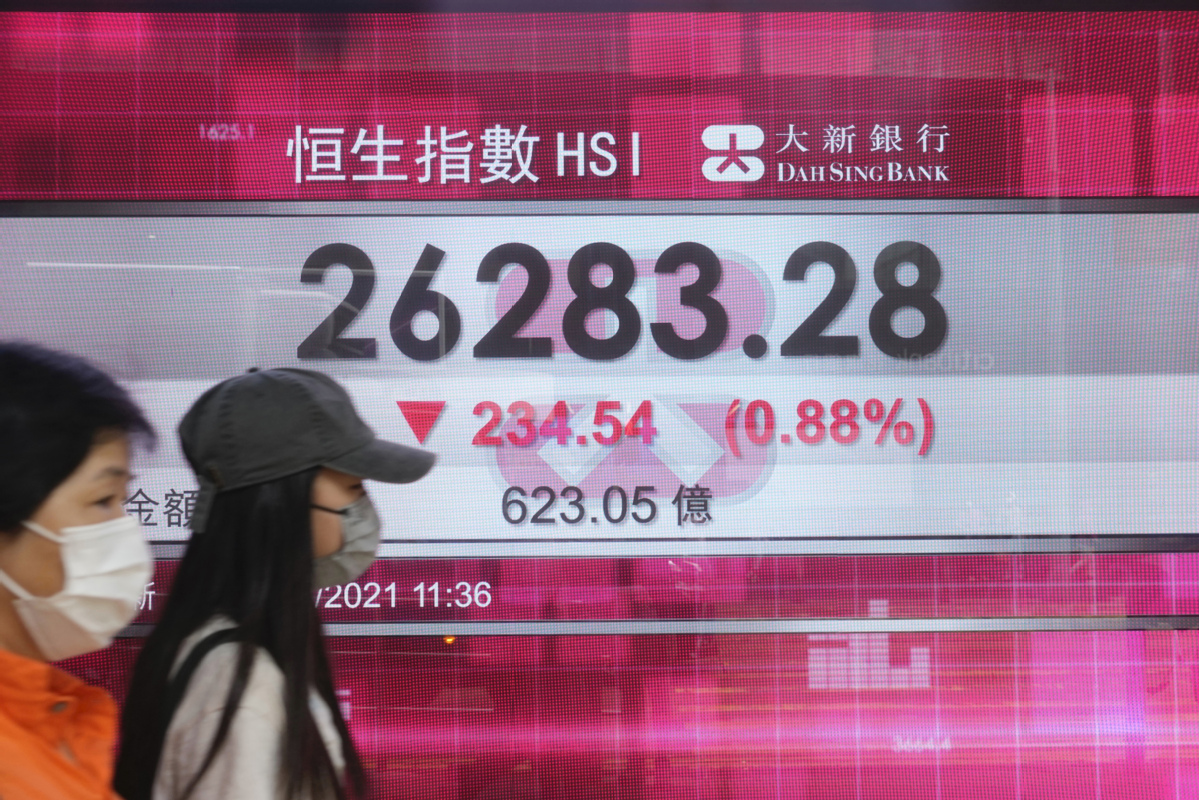 Pedestrians walk past an electronic board showing the Hong Kong share index on Aug 13. (Photo: Agencies)

The global performance of initial public offerings by Chinese mainland technology, media and telecommunications firms remained robust in the first half, and the appeal of the Hong Kong IPO market for Chinese mainland concept stocks is expected to keep growing in the second half, said a report by global accounting firm PwC.

The Shanghai Stock Exchange's STAR Market is being continuously refined and improved, said Emily Liu, assurance partner for the Chinese mainland at PwC, while emphasizing "core science and technology enterprises with advanced technologies will remain the focus of STAR Market listings in the second half of 2021".

In addition, Liu said the scale of enterprises listed under the registration-based IPO system of the tech-heavy ChiNext on the Shenzhen bourse is constantly expanding. The upcoming gathering of the three major telecom carriers in the A-share market indicates that the Chinese mainland market will open a window for the development of large TMT enterprises, Liu added.

There were 78 IPOs from Chinese mainland TMT enterprises in the first half, marking a drop from the 109 recorded in the second half of last year, according to the report. The total amount of financing for the 78 listings reached approximately 213.8 billion yuan ($33 billion).

The largest IPO of Chinese mainland TMT companies in the first half of 2021 was by Kuaishou Technology, which raised around HK$48.3 billion ($6.2 billion) in Hong Kong.

In the first half of 2021, Hong Kong and overseas capital markets became popular options for Chinese mainland TMT enterprises intending to list, and 34 Chinese mainland TMT enterprises, representing 44 percent of the overall number, chose to list in Hong Kong and overseas. They raised about 175.8 billion yuan, accounting for 82 percent of total financing.

Reviewed by sector, the software and service industry saw 44 listings in the first six months of this year, accounting for 56 percent of TMT IPOs. Over the same period, there were 32 IPOs in the technology hardware and equipment industry, making up 41 percent of listings.

Since the listing of the first batch of companies under the ChiNext registration-based IPO system on Aug 24, 2020, 34 TMT companies have listed, generating total financing of 27.4 billion yuan and an average financing of 806 million yuan. The average initial P/E ratio was 34 times.