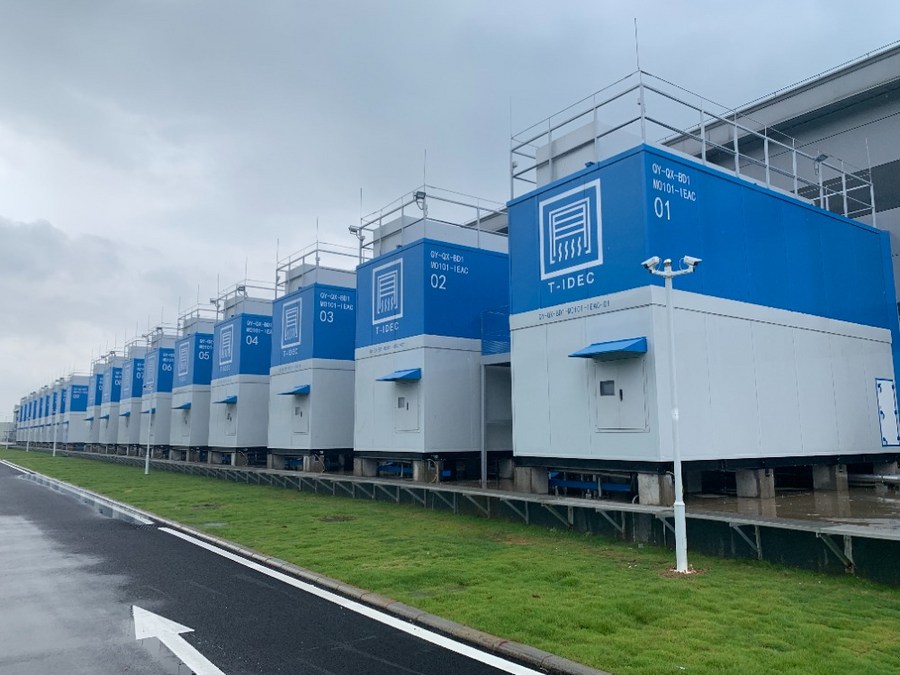 Photo shows the Tencent Qingyuan Data Center with low-energy consumption, which was put into operation on July 3, 2020. [Photo/Xinhua]

Chinese tech companies are emerging as major contributors of global patents as they beef up research and development spending to grow their digital prowess and accelerate technological progress in the world, industry experts said.

The dynamic development is not just mirrored in Chinese players that lead the ranks of patents in areas such as digital communications, artificial intelligence and virtual reality, but also in the growing quality of overall applications from Chinese companies, said Xiang Ligang, director-general of the Information Consumption Alliance, a Beijing-based industry association.

For instance, six of China's big tech companies, including Tencent, Baidu, Oppo and Huawei, made the top 10 list of companies that filed the most virtual reality and augmented reality patent applications globally in the last two years, according to data from Singapore-based research and development analytics provider PatSnap.

Mike Baycroft, CEO of IfiClaims Patent Services, a US patent service provider, said in a statement it is clear that China has stimulated a research and development culture that is serious about intellectual property.

According to its report, patent awards to Chinese companies in the US rose about 10 percent to 20,679 in 2021, showcasing their increasing innovative capabilities. The growth came despite the fact that US patent grants overall declined about 7 percent last year, the most precipitous drop in the past decade.

When it comes to total global patent holdings, China possesses 29 percent of the global 250 patent families of patent applications covering the same or similar technical content, compared with 24 percent for the US and 19 percent for Japan, said IfiClaims. An upward trend is also evident in European patents filed by Chinese companies.

Aidan Kendrick, chief business analyst of the Munich-based European Patent Office, told Xinhua News Agency that over the past 10 years, the number of patent applications from Chinese companies has increased fourfold.

In digital communications, Chinese companies were already the biggest patent filer with a share of 29 percent in 2021, according to the European Patent Office.

The progress comes as Chinese companies beef up research and development. For instance, Huawei's R&D spending over the past decade reached 845 billion yuan ($129 billion).

Guo Ping, chairman of the supervisory board at Huawei, said the company has become one of the world's largest patent holders through persistent investment in innovation. With 3,544 filings, Huawei was the largest patent applicant at the European Patent Office in 2021, ahead of Samsung and LG from South Korea.

Chen Mingyong, CEO of Oppo, which was the second most active Chinese patent applicant in Europe, said the company aims to be a tech pioneer through long-term R&D.