Before 2017, gastroenterologist Cheng Chunsheng had to inspect over 1,000 gastroscopy pictures to search for possible esophageal cancer symptoms, a cancer which appears in the food pipe. 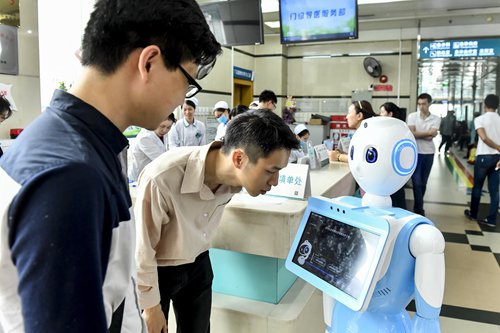 People use an AI-powered robot to check in at a hospital in Guangzhou, South China's Guangdong Province on April 3. (Photo: VCG)

However, this painstaking process has no longer been needed since the People's Hospital of Nanshan District in Shenzhen, South China's Guangdong Province where Cheng works introduced "Tencent AIMIS," an artificial intelligence (AI) medical imaging software released in August 2017.

"The AI system screens through each report and notifies the doctor if further inspection is needed," said Cheng, noting that it has significantly boosted his work efficiency.

A doctor's experience is the most important tool when diagnosing esophageal cancer at an early stage. Cheng said the system, developed by Chinese tech giant Tencent Holdings, will assist younger doctors in making more precise diagnoses.

"It is often difficult for new doctors to judge whether an erosion or an ulcer is related to cancer. The AI application will recommend younger doctors to discuss the case with an expert instead," he added.

Chen Guangyu, Tencent's vice president, said the program has scanned hundreds of thousands of gastroscopy images and is over 90 percent accurate in diagnosing preliminary esophageal cancer.

"By accumulating mass data, the analysis is expected to become even more reliable," Chen added.

Tencent AIMIS is now used in more than 100 hospitals across China. The firm has even partnered with over 10 hospitals to build AI medical labs.

Chen said that through the AI laboratories, Tencent AIMIS can be used to screen more diseases such as lung nodules, diabetic retinopathy, cervical cancer and breast cancer.

Other internet corporations are also exploring the AI healthcare market.

In 2016, Baidu launched Melody the Medical Assistant, an AI-powered chatbot designed to converse with patients and collect data on their conditions to save physicians time.

According to a 2017 industry report released by VCBeat Research, more than 80 companies are working on AI for the Chinese health market by developing products such as medical imaging devices, AI to analyze patients' clinical history, as well as chatbots.

Luo Xudong, head of the People's Hospital of Nanshan District in Shenzhen, said the advancement of AI-assisted healthcare can help alleviate the problem of inadequate and imbalanced medical resource allocation in China.

Chang Jia, who manages Tencent's "internet plus" healthcare center, said that a small error in the medical field could be a matter of life or death.

"The industry still positions AI as an assistant to the doctors. On the one hand, medicine is a mix of humanities, ethics and science, and there are no easy answers," Chang said.