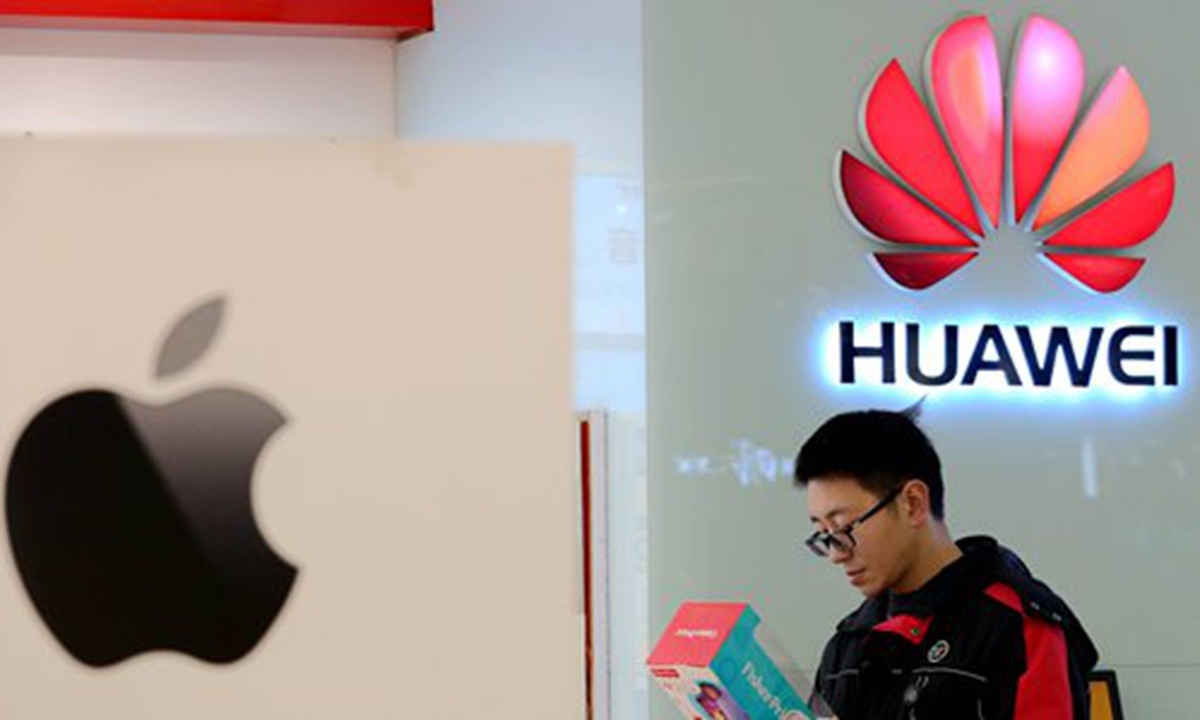 A customer walks past the logos of Huawei and Apple in Nantong, East China's Jiangsu Province. (Photo: VCG)

Apple unveiled on Tuesday its much-anticipated iPhone 12 lineup with 5G connectivity, the sales of which is expected to reveal whether the US-China tech war has hit its consumer loyalty in the world's largest 5G smartphone market.

Judging from netizen comments on China's Twitter-like Weibo on Wednesday, while the tag "iPhone 12" is a hot topic on social media platforms, online reactions toward the new 5G smartphone indicate that the new models may not bring the success Apple is hoping for. Many expressed disappointment at its lack of groundbreaking innovations, claiming that 5G is not a premium feature, while others criticized the new series for not being equipped with earbuds and power adapter and questioned whether it is really for the environmental reason or profit maximization.

The stock market performance also indicates that professionals are not optimistic about the market prospects of the new iPhone lineup to a certain extent. Apple's stock tumbled as much as 4 percent after the launch of the new iPhones before closing down 2.65 percent at $121.10 on Tuesday.

Moreover, since Huawei is scheduled to release the Mate 40 Pro next week, many Chinese customers prefer to wait to see Huawei's new phone before placing an order, exerting pressure on the sale of iPhone 12. Even if the supply of Huawei's Mate 40 series could be limited due to the US ban on its chip supplies, all the other major smartphone makers have all rolled out competitive 5G smartphones in China that has the fastest 5G commercial coverage development. In this sense, Apple's iPhone 12 is bound to face fierce competition in its most promising market.

Unfortunately, however, US tech war against China may constitute a hurdle in Apple's pursuit of a strong cycle of upgrades among its Chinese customers. The Trump administration has been acting recklessly to crack down on Chinese tech companies to gain its tech monopoly for the coming decade. While industrial players in the value chain are rational enough to seek to maximize their economic benefits and try not to be involved in the US-China tech war, consumer sentiment could be more complicated and direct. To a certain extent, the tech war may have triggered Chinese antipathy toward American products. A Global Times survey based on 1,800 respondents in July showed that 63.7 percent of respondents chose the US as the country for whose products and brands their preference has dropped.

Of course, it remains to be seen whether Apple's consumer loyalty could help overcome the negative sentiment caused by political tensions.

In the long run, the US is making troubles for its own consumer goods in its quest for chip supremacy, which may be one of the side effects of the tech war. The image of iPhones and other American products has become complicated in the eyes of some Chinese consumers, an unusual tendency that American companies should be prepared for.