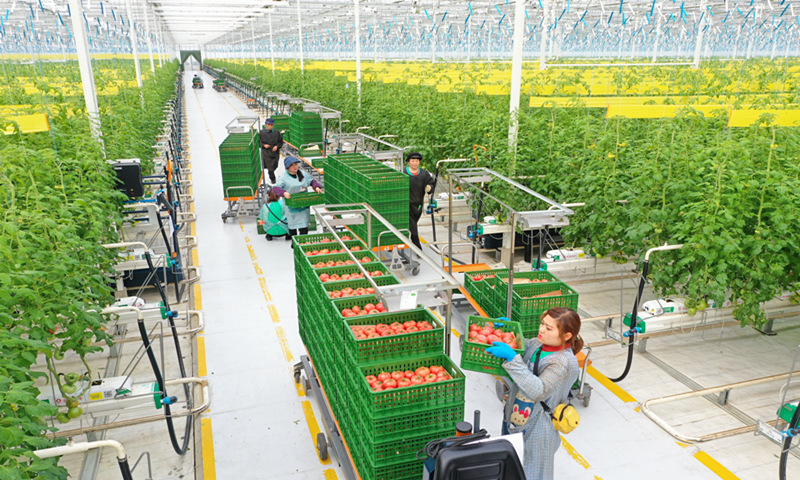 Employee pick tomatoes in a greenhouse at an intelligent agriculture park in Meishan city, Southwest China's Sichuan Province on Sunday. Meishan has continuously improved the supply of grain and other products through smart agriculture. To ensure supplies for the New Year holiday and the Spring Festival in February, local smart agricultural parks increased yields through the use of science and technology. (Photo: cnsphoto)

Representatives from major Chinese companies are calling for applying more new and high technology into farming and animal husbandry, while stepping up rural area administration amid the country's greater push for rural regions revitalization.

Ma Huateng, CEO of tech giant Tencent Co., who is a deputy to the 13th National People's Congress (NPC), put forward a proposed to accelerate digitalization of agricultural production this year.

The fourth session of 13th National People's Congress (NPC), the country's top legislature, is scheduled to open on Friday.

Ma said that Tencent has established a base for piloting small tomato plantation using artificial intelligence (AI) in Northeast China's Liaoning Province, achieving a net profit increase of several thousand yuan per mu every quarter, which has demonstrated the potential economic value of smarter agriculture.

Based on the research and practice over the past year, Ma proposed internet technology and smart agriculture be applied to "resonate at the same frequency" to accelerate the digitalization of agricultural production.

Liu Yonghao, founder of China's largest private agribusiness, New Hope Group, who is also a NPC deputy, advised to introduce subsidy support to the Research and Development for hog breeding, and in doing so "turning the table" for the breeding industry.

The suggestions also come as China unveiled the "No. 1 Document" for 2021 on February 22, renewing its emphasis on the country's rural area and agricultural sector, while also bringing in more urgent issues such as tackling core bottlenecks in agricultural technologies and strengthening China's domestic livestock breeding system.

As the first policy statement released by China's central government each year, the document is seen as an indicator of policy priorities. Work on agriculture and rural areas has been high on the agenda for 18 consecutive years.

The protection, development and utilization of agricultural germplasm resources should be strengthened and the implementation of major scientific and technological projects in agricultural biological breeding should be accelerated, the document said.

Apart from efforts from major Chinese tech firms, local authorities and enterprises have also started rural layout in an effort to catch up with the rural revitalization trend.

Zhang Lichen, chief strategy officer of Heilongjiang Agricultural Investment Group, told the Global Times on Thursday that the firm has already made significant effort in promoting the smart agriculture in the province's rural areas.

Zhang said that the data company under the group has already helped design and implement plans for the construction of agricultural big data centers in related counties, and further promote digitalization trend in the agriculture sector.